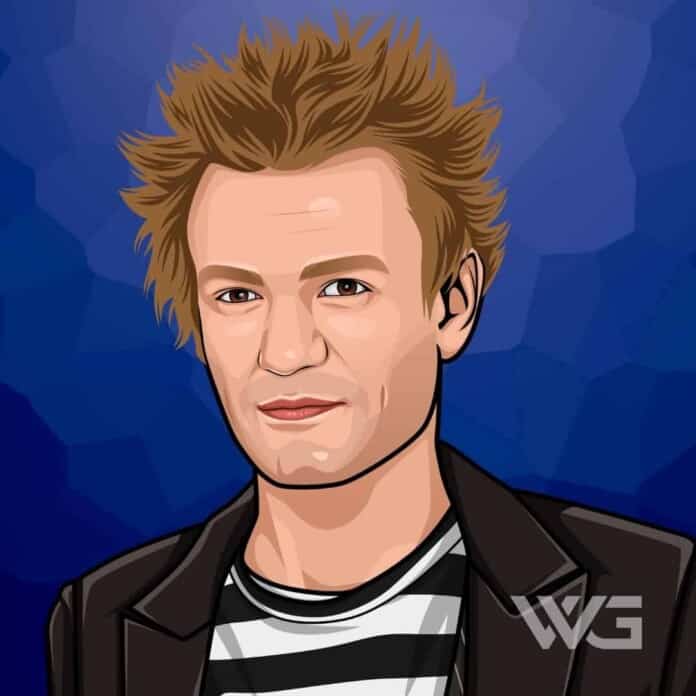 What is Deryck Whibley’s net worth?

Deryck Whibley is a Canadian musician, singer, and songwriter.

Whibley is best known for his work as the lead vocalist, rhythm guitarist, keyboardist, main songwriter, producer, and only constant member of the rock band Sum 41.

Deryck Jason Whibley was born on the 21st of March, 1980, in Scarborough, Ontario.

Whibley was raised by his single mother and moved to many different places during his childhood. He spent his teenage years with his mother and stepfather, Kevin Gordon.

During his stay in Ontario, he attended Southwood Park Public School and later went to Exeter High School. During his school days, he developed an interest in music.

Whibley rose to fame when he formed Sum 41 with Steve Jocz, Richard Roy, and Jon Marshall.

They were originally called Kaspir, and were a NOFX cover band. In 1999, the band signed an international record deal with Island Records.

Besides Sum 41, he developed a professional career in the music industry as a producer and manager. Whibley was part of Bunk Rock Music, a music management and production company. He produced for No Warning with the company as well.

In 2005 and 2006, he worked with Tommy Lee on guitar and backing vocals for his album ‘Tommyland: The Ride’ and ‘A Million in Prizes: The Anthology’ with Iggy Pop.

The following year, he mixed the debut album of the band Permanent Me. He was also involved with the Avril Lavigne album, ‘The Best Damn Thing,’ where he produced and played guitar.

Besides his musical career, Whibley has worked as an actor as well. He portrayed the character, Tony in the movie ‘Dirty Love’ and himself as a guest character in ‘King of the Hill’.

How Does Deryck Whibley Spend His Money?

Deryck Whibley spends some of his money on his real estate in Encino and charity work.

Whibley owns a home in Encino worth $2.8 million. It comes with a step-down living room that opens to a dining room and adjacent wine room. It also comes with a library and a game room with a wet bar that sits off the wine room.

Whibley has helped charities such as A Place Called Home.

Here are some of the best highlights of Deryck Whibley’s career:

“There’s always going to be ups and downs in life, and it doesn’t mean you shouldn’t feel the pain. Pain is good. It makes you stronger in time. You will realize how great the ‘great’ really is. Life is about ups and downs. Don’t you have to be able to ride the waves.” – Deryck Whibley

“September 11 definitely opened our eyes, but when I was 19 or whatever on the last record, we didn’t care about anything. We were too young to care about anything. And then as you get older, you don’t really have any excuse to be stupid anymore, to be in the dark.” – Deryck Whibley

“It’s gotten a lot easier for me to write songs. It used to be really hard. The records are also more cohesive now. If I were to tell someone who had never listened to Sum 41 before what to listen to, I’d give them. I don’t have a “Fat Lip” on this record, but overall it’s a better record.” – Deryck Whibley

“I always had an interest in recording bands right back to when I was about 15 or 16. And I would go around recording the few bands that I knew that were in high school. If there were a band in our town, I would try to go and record them.” – Deryck Whibley

Now that you know all about Deryck Whibley’s net worth and how he achieved success; let’s take a look at some of the lessons we can learn from him:

People are not disturbed by things but by the view they take of them.

It is better to be feared than loved if you cannot be both.

How much is Deryck Whibley worth?

Deryck Whibley’s net worth is estimated to be $6 Million.

How old is Deryck Whibley?

How tall is Deryck Whibley?

Whibley was born in Ontario, Canada. He is a successful singer-songwriter, musician, and producer who is most widely recognized as the frontman for the band Sum 41.

The band was formed in 1996, and they have sold over thirty million albums worldwide to date. Sum 41 has released five Studio Albums since 2001.

What do you think about Deryck Whibley’s net worth? Leave a comment below.