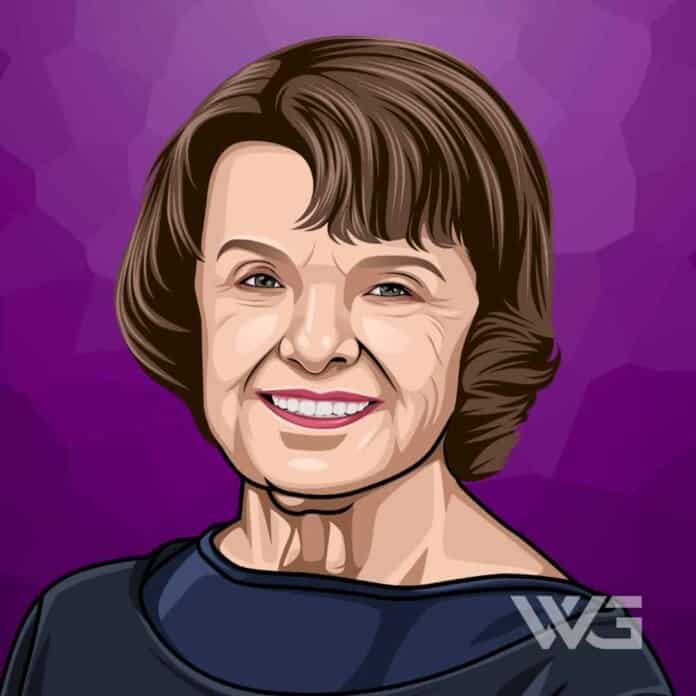 What is Dianne Feinstein’s net worth?

Dianne Feinstein is an American politician.

Feinstein served as the United States Senator since 1992 and the Senior Senator.  She served as the board’s first female president in 1978. During the assassinations of Mayor George Moscone and City Supervisor Harvey Milk, she succeeded Moscone as mayor. She became the first woman to serve in that position.

Dianne Emiel Goldman was born on the 22nd of June, 1933, in San Francisco. Goldman is the daughter of Leon Goldman and his wife, Betty. Her paternal grandparents were Jewish immigrants from Poland.

Goldman was a fellow at the Coro Foundation in Francisco between 1955 and 1956. She served on the board until 1966, and she was elected to the San Francisco Board of Supervisors in 1969.

In 1978, Feinstein discovered Harvey Milk’s body in his office after the shootings occurred. She took on the role of acting mayor. After the Board of Supervisors voted in favor of officially putting her as the mayor, she was inaugurated on the 4th of December, in 1978.

After she unsuccessfully ran for governor, she won and took office in 1992, becoming California’s senior senator and America’s first female senator.

Feinstein has been re-elected five times. In 2012, she set the record for the highest number of popular votes in a U.S Senate election with 7.75 million votes.

In the 2018 election, the California Democratic Party’s executive board chose to endorse State Senator Kevin de León instead of Feinstein, but she eventually won the “jungle primary.”

How Does Dianne Feinstein Spend Her Money?

Dianne Feinstein is an iconic politician, and she likes to spend some of her fortunes on donations or real estate.

Feinstein owns a beautiful 9,500 mansion in San Francisco, which she purchased in 2006 for $16.5 million. The villa comes with five bedrooms, an elevator, and a wine cellar. She also owns. a house in Washington D.C.

When Feinstein was up for reelection, she put $5 million of her own money into her race.

Here are some of the best highlights of Dianne Feinstein’s career:

“Let the record show that you can be a United States senator for 21 years. You can be 79 years old. You can be the Senate Select Committee on Intelligence chair and one of the most recognizable and widely-respected veteran public servants in your nation. But if you are female while all of those things, men who you defeat in arguments will still respond to you by calling you hysterical and telling you to calm down.” – Dianne Feinstein

“Our climate is changing. The Earth’s climate has, in fact, warmed by 1.1 to 1.6 degrees Fahrenheit since the industrial revolution. People look at this and say: Oh, that is not very much. In fact, it is very much, and it changes the dynamic.” – Dianne Feinstein

“Domestic violence causes far more pain than the visible marks of bruises and scars. It is devastating to be abused by someone that you love and think loves you in return. It is estimated that approximately 3 million incidents of domestic violence are reported each year in the United States.” – Dianne Feinstein

“And, I know the sense of helplessness that people feel. I know the urge to arm yourself because that’s what I did. I was trained in firearms. I’d walk to the hospital when my husband was sick. I carried a concealed weapon. I determined that if somebody was going to try to take me out, I was going to take them with me.” – Dianne Feinstein

“After a disaster such as Hurricane Katrina, the federal government has a profound obligation to help those in need. Right now, the victims of Hurricane Katrina need our help. Entire communities have been destroyed. Families have been torn apart. Many are still missing. Tens of thousands remain homeless.” – Dianne Feinstein

Now that you know all about Dianne Feinstein’s net worth and how she achieved success; let’s take a look at some of the lessons we can learn from her:

We’re not perfect, and there are some dark patches in our past, but what makes us unique is that we recognize these evils, we come to grips with them, and we fix them.

Toughness doesn’t have to come in a pinstripe suit.

Winning may not be everything, but losing has little to recommend it.

How much is Dianne Feinstein worth?

Dianne Feinstein’s net worth is estimated to be $110 Million.

How old is Dianne Feinstein?

How tall is Dianne Feinstein?

Dianne Feinstein is a United States Senator from California who was introduced to politics by an uncle who began taking her to San Francisco Board of Supervisors meetings.

Since then, she had become San Francisco’s first female mayor in 1978, and she was the nation’s most visible and recognized leader.

What do you think about Dianne Feinstein’s net worth? Leave a comment below.