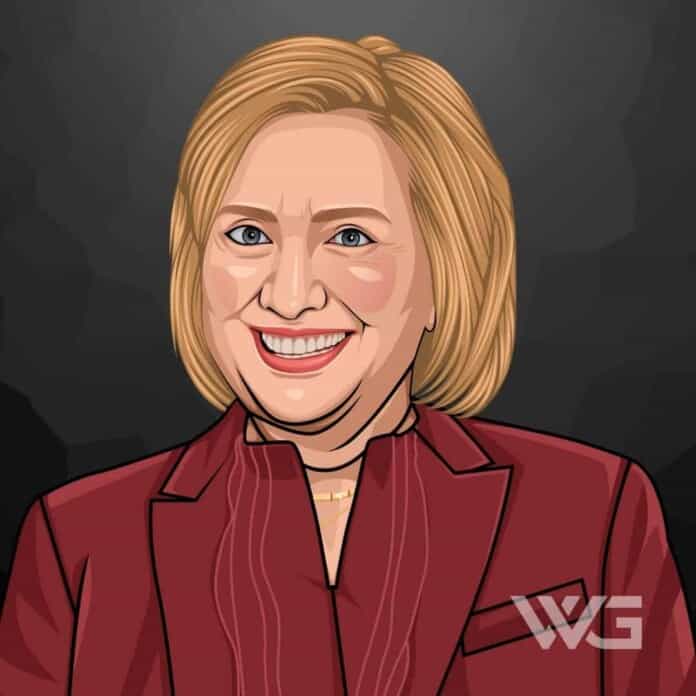 What is Hilary Clinton’s net worth?

Hillary Clinton is an American politician, lawyer, and writer. Clinton is best known for her years she served as the 67th United States secretary from 2009 to 2013.

She was the United States senator from New York between 2001 to 2009. She became the first woman to be nominated for president of the U.S by a major political party.

As of February 2023, Hillary Clinton’s net worth is estimated to be roughly $120 Million.

Hillary Diane Rodham Clinton was born on the 26th of October, 1947, in Illinois. Clinton is the daughter of Dorothy Howell and Hugh Rodham.

In 1965, Clinton graduated from Maine South High School. She enrolled at Wellesley College the same year. During college, she was active in student politics and was elected as the school’s young republicans.

Clinton joined her husband in a campaign for a seat in the Presidential elections in 1992. The following year, she became the First lady of the United States, and she also held a postgraduate degree.

She played a huge role in public policies, and as First Lady, she was appointed to head the Task Force on National Health Reform in 1993.

In 2007, she hinted about her contesting in the presidential elections of 2008. She lost the elections to Barack Obama. Clinton announced her candidacy for the presidency in the 2016 election.

She has authored and co-authored many books over the years, including ‘Living History,’ ‘Hard Choices’ and ‘What Happened .’

Clinton earned more than $11 million from her speeches over a 15-month span. Between the years 2007 and 2014, the Clintons earned $141 million. The couple paid $56 million in federal and state taxes. They also donated $15 million to charity.

How Does Hillary Clinton Spend Her Money

Hillary Clinton is a successful woman who has earned a massive amount of money throughout her career. Some of her fortunes come from her additional best-selling books.

Hillary Clinton is a proud owner of a beautiful mansion in Washington D.C. The 5,500-square-foot house was built in 1951. It has been renovated and comes with many luxury amenities.

Clinton owns a lot of jewelry. One of the most notable pieces features a gold link chain designed by Varda Singer. The chain has 18-carat yellow gold in it.

Here are some of the best highlights of Hillary Clinton’s career:

“There are 4 billion cell phones in use today. Many of them are in the hands of market vendors, rickshaw drivers, and others who’ve historically lacked access to education and opportunity. Information networks have become a great leveler, and we should use them together to help lift people out of poverty and give them freedom from want.” – Hillary Clinton

“If you’re not comfortable with public speaking – and nobody starts out comfortable; you have to learn how to be comfortable – practice. I cannot overstate the importance of practicing. Get some close friends or family members to help evaluate you, or somebody at work that you trust.” – Hillary Clinton

“The challenges of change are always hard. It is important that we begin to unpack those challenges that confront this nation and realize that we each have a role that requires us to change and become more responsible for shaping our own future.” – Hillary Clinton

“I do make some people uncomfortable, which I’m well aware of, but that’s just part of coming to grips with what I believe is still one of the most important pieces of unfinished business in human history—empowering women to be able to stand up for themselves.”  – Hillary Clinton

“Among the most striking things that I have learned is how much we have in common. I’ve sat down with people everywhere, discussing what was in their hearts and on their minds. And it doesn’t take long to find commonality, which is often overlooked, ignored, dismissed, and rejected otherwise.” – Hillary Clinton

Now that you know all about Hillary Clinton’s net worth, and how she achieved success; let’s take a look at some of the best lessons we can learn from her:

You can’t just give a speech and expect people to fall down and agree with you.

You don’t walk away if you love someone. You help the person.

Women are the largest untapped reservoir of talent in the world.

Everybody has setbacks in their life, and everybody falls short of whatever goals they might set for themselves. That’s part of living and coming to terms with who you are as a person.

How much is Hillary Clinton worth?

Hillary Clinton’s net worth is estimated to be $120 Million.

How old is Hillary Clinton?

How tall is Hillary Clinton?

Hillary Clinton is a well-known American politician, author, and media personality who has received her massive net worth for being the First Lady of the United States from 1993 to 2001.

Clinton is also known for serving as United States Senator for New York between 2001 to 2009. She was the Secretary of State under the 44th President Barack Obama between the years 2009 to 2013.

What do you think about Hillary Clinton’s net worth? Leave a comment below.