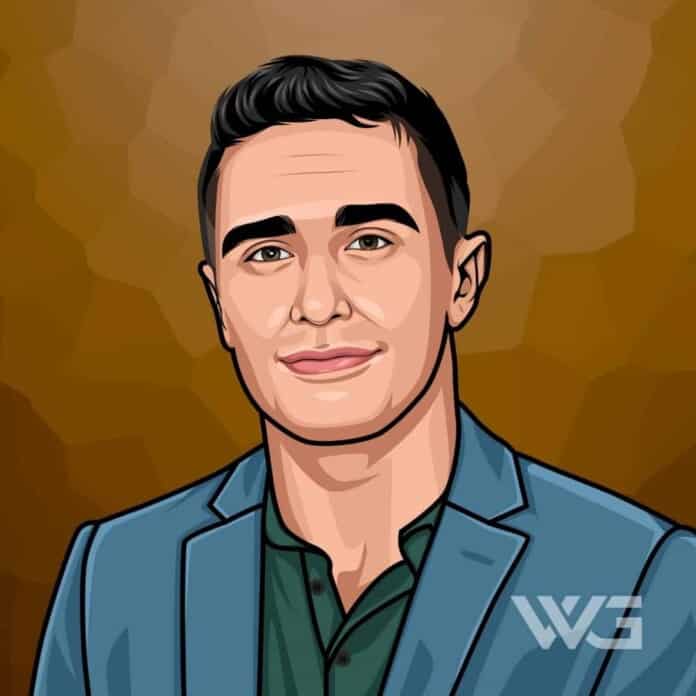 What is Jake Cannavale’s net worth?

Jake Cannavale is an American musician and actor.

Cannavale appeared on Broadway in the comedy ‘Fish in the Dark’ in 2015. He also appeared on television’s ‘Nurse Jackie’ and ‘The Mandalorian.’ Cannavale is the son of actor Bobby Cannavale and Jenny Lumet. He is the grandson of film director Sidney Lumet.

As of January 2023, Jake Cannavale’s net worth is estimated to roughly $1.5 Million.

Jacob Lumet Cannavale was born on the 1st of May, 1995, in Manhattan, New York. Cannavale is the son of Bobby Cannavale and Jenny Lumet. He is the grandson and great-grandson of Hollywood legend Sidney Lumet and Lena Horne.

Cannavale made his first appearance in the acting world when he starred in a cameo ‘Romance & Cigarettes ‘ in 2005. His father was a part of the ensemble cast of the musical.

He got his real acting project when he was cast as Charlie Cruz in the Golden Globe-nominated medical comedy-drama ‘Nurse Jackie’. He appeared in seven episodes of the popular TV series and received a Screen Actors Guild Award nomination for his performance on the series.

In 2015, Cannavale made his debut on Broadway with the comedy ‘Fish in the Dark,’ written by Larry David. David also starred in the Broadway play, and he is the creator of the successful TV shows ‘Seinfield’ and ‘Curb Your Enthusiasm.

Between 2014 and 2016, Cannavale featured in many short films, including ‘Interior Teresa,’ ‘Grapes,’ ‘Fade,’ and ‘Send.’ In 2017, he was part of ‘Untitled Jenny Lumet Project’. Later that year, he was part of ‘Moths & Butterflies,’ playing ‘Bumphrey Hoggart.’

The following year, he wrote five episodes of an indie comedy series ‘The Elevator’. Later that year, he appeared in a leading role in a short named ‘Limit of Wooded Country’. He has been part of the pilot for the TV series ‘Misfits,’ ‘Eat, Brains, Love’ and ‘God’.

Cannavale appeared with his father in a Hugo Boss ad campaign in 2019. During the shoot, the actor said that his father had taught him a lot about the importance of being genuine and being true to yourself.

As of January 2023, Jake Cannavale’s net worth is estimated to be roughly $1.5 Million.

Here are some of the best highlights of Jake Cannavale’s career:

“It means my dad was an actor, my mom was a writer, her dad was a director, her grandma was an actor… I’m the fourth generation on both sides of the family. I thought you had to do something involving the visual arts. Growing up, I was always helping my dad run lines, and thought that’s just what every kid did.” – Jake Cannavale

“Yeah, I wanted to be a rock star on my terms. The music I loved to make and I do make, isn’t something you can’t get ​“famous” off of, which is kind of freeing in a way. It just proves to me that the only reason to do it is ​‘cause you love it.” – Jake Cannavale

“It’s actually not as advantageous to have my last name or history. It’s there, of course, the advantages you would imagine. But there’s also the fact that a lot of artists, filmmakers, casting directors will see the last name and immediately assume you’re not gonna be as good as the reason it carries weight.” – Jake Cannavale

“Yeah, absolutely. Let’s say my father went to a director and said, ​“Hey, put my kid in your movie.” A good director’s not gonna give a shit if my last name carries some financial weight, or give a shit if he’s friends with my dad or my mom.” – Jake Cannavale

“We used this new technology. Instead of a green screen, they build like a centerpiece, and around it is a dome of LED screens, with a video department which is just like, 20 nerds sitting behind it who literally upload and manipulate a background.” – Jake Cannavale

“I don’t like to speak on behalf of my band members or anyone, as a general rule, but I can say we are all pretty eclectic in terms of our musical tastes, with extreme music being the anchor or epicenter, so to speak.” – Jake Cannavale

Now that you know all about Jake Cannavale’s net worth and how he achieved success; let’s take a look at some of the lessons we can learn from him:

If you want to lift yourself up, lift up someone else.

We can’t help everyone, but everyone can help someone.

Nothing ever gets easier. You just get stronger. When you’re not sure if you’re following the right path, when you’ve been knocked down a few too many times, it’s completely fine to get discouraged. What’s not okay is to stop.

How much is Jake Cannavale worth?

Jake Cannavale’s net worth is estimated to be $1.5 Million.

How old is Jake Cannavale?

How tall is Jake Cannavale?

Jake Cannavale is an American actor and musician.

He is best known for his role as the son of a character played by his father Bobby Cannavale in the comedy-drama series ‘Nurse Jackie’. He has also appeared as a stage actor in the broadway comedy ‘Fish in the Dark’ alongside TV legend Larry David. Cannavale comes from a family with lots of talents.

As of January 2023, Jake Cannavale’s net worth is estimated to be roughly $1.5 Million.

What do you think about Jake Cannavale’s net worth? Leave a comment below.

What is John Krasinski's net worth? Introduction  As of ,...