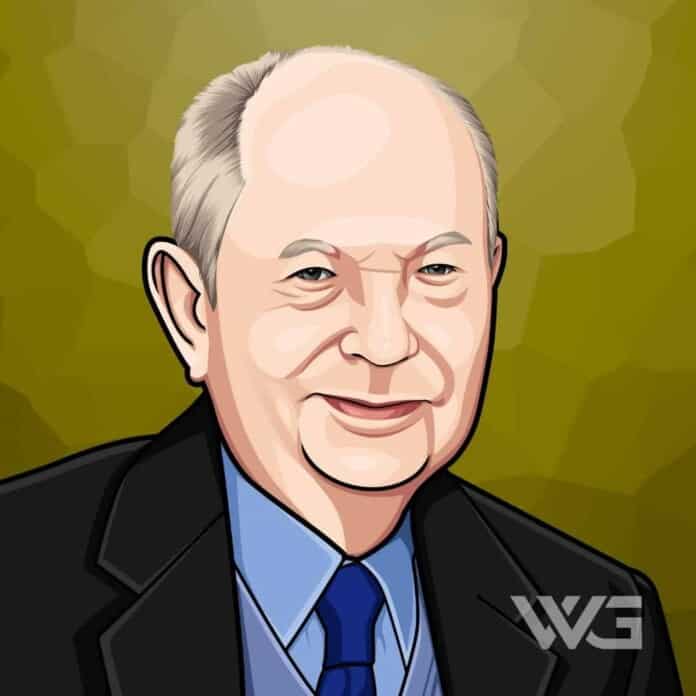 What is Jerry Perenchio’s net worth?

Jerry Perenchio was an American billionaire businessman and philanthropist.

Perenchio was at one time the chairman and chief executive officer of Univision. He passed away on the 23rd of May, 2017.

Jerry Perenchio was born on the 20th of December, 1930, in California.

He was the grandson of Italian immigrants Giovanni Batiste Perenchio and Madeline D’Adda. His grandfather established the Fresno Grape Exchange.

Perenchio was raised in Fresno until the age of 15, when he was sent to Black Foxe Military Institute in Los Angeles for three-and-a-half years, graduating in 1949. He then financed his own way through college, first with a series of odd jobs and then by establishing a small company – Party Management.

In 1971, Perenchio co-promoted the World Heavyweight bout aka ‘Fight of the Century’ between Muhammad Ali and Joe Frazier at Madison Square Garden.

He also produced the ‘Battle of the Sexes’ which was a tennis match between Billie Jean King and Bobbie Briggs, and was a producer of popular shows like ‘The Jeffersons’ and ‘Diff’rent Strokes.’

Perenchio united with ‘All in the Family producer Norman Lear to form Embassy Communications. In 1986, they sold Embassy to Coca-Cola for $485 million. That’s the same as $1.2 billion in today’s dollars.

He took his share of the windfall and reinvested in television. Alongside his media partners, he bought the Spanish channel Univision for $550 million in 1992. At the time of his death in 2017, Jerry’s 16% stake in Univision was worth $1.3 billion.

Perenchio was a longtime Republican donor. He was a major philanthropist, and he has supported numerous causes. In 2010, he donated $4.8 million to the UCLA Foundation

How Does Jerry Perenchio Spend His Money?

Jerry Perenchio spent his money on real estate and on charity work.

In 1986, Perenchio purchased an estate in LA’s Bel-Air neighborhood. The estate, which is called “Chartwell”, was famous for being used in the opening credits of the television series “The Beverly Hillbillies”. The same year, Ron and Nancy Reagan moved into a house next door. Several months after his death, the estate was listed for $350 million.

Throughout his life, he has spent a fortune helping different charities and organizations.

Here are some of the best highlights of Jerry Perenchio’s career:

Now that you know all about Jerry Perenchio’s net worth and how he achieved success; let’s take a look at some of the lessons we can learn from him:

Focus on the journey, not the destination.

You may have to fight a battle more than once to win it.

How much is Jerry Perenchio worth?

Jerry Perenchio’s net worth is estimated to be $2.7 Billion.

How old is Jerry Perenchio?

How tall is Jerry Perenchio?

Perenchio was best known for being the CEO of Univision. Univision was the largest Spanish network in the US. He was also the former agent for Marlon Brando and Elizabeth Taylor, among other stars.

He produced several sports events including the ‘Battle of the Sexes’ tennis match between Billie Jean King and Bobbie Briggs, and the ‘Fight of the Century’ between Muhammad Ali and Joe Frazier.

What do you think about Jerry Perenchio’s net worth? Leave a comment below.