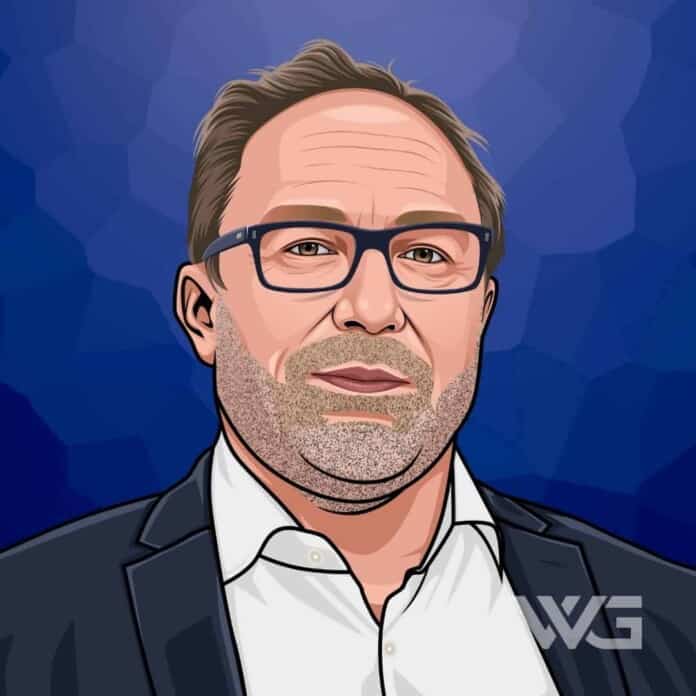 What is Jimmy Wales’ net worth?

Jimmy Wales is an Internet entrepreneur.

Wales is also a former financial trader. He is the co-founder of the online non-profit Wikipedia. Wales was born in Alabama, where he attended Randolph School. He earned bachelor’s and master’s degrees in finance from Auburn University.

His father worked as a grocery manager while his mother and his grandmother ran the House of Learning. It was a small private school in the tradition of the one-room schoolhouse.

Growing up, Wales enjoyed reading. When he was 3 years old, his mother purchased a World Book Encyclopedia from a salesman. He learned to read, soon discovering that the World Book had shortcomings.

In 1994, Wales started his career at Chicago Options Associates. He had developed an interest in computer school during his school years.

In 2000, alongside Larry Sanger, they launched Nupedia. He intended for many experts to write articles on a volunteer basis that would be reviewed by many other experts.

Nupedia took a long time to develop and grow. After he met the programmer, Ben Kovitz, he continued to fund the project for some time.

However, the lengthy submission and review process made Nupedia very slow to develop and grow. Sanger, after having met programmer Ben Kovitz, suggested that Nupedia should suggest the wiki model, allowing editors to contribute simultaneously and incrementally.

In 2003, Wales set up the Wikipedia Foundation. The following year, he founded the for-profit company, Wikia. It was a wiki far, making it hosts collections of individual wikis on topics like “Star Wars” or “Harry Potter.” Wikia also offered a search engine that was meant to rival Google.

Here are some of the best highlights of Jimmy Wales’ career:

“I think MySpace is doomed, I give them about two more years…. I think Facebook is the next Microsoft in both the bad and the good senses. That’s an amazing company that is going to do a lot of good and bad things.” – Jimmy Wales

“Wikipedia is first and foremost an effort to create and distribute a free encyclopedia of the highest possible quality to every single person on the planet in their own language. Asking whether the community comes before or after this goal is really asking the wrong question: the entire purpose of the community is precisely this goal.” – Jimmy Wales

“I frequently counsel people who are getting frustrated about an edit war to think about someone who lives without clean drinking water, without any proper means of education, and how our work might someday help that person. It puts flamewars into some perspective, I think.” – Jimmy Wales

“We are growing from a cheerful small town where everyone waves off their front porch to the subway of New York City where everyone rushes by. How do you preserve the culture that has worked so well?” – Jimmy Wales

“We are Wikipedians. This means that we should be: kind, thoughtful, passionate about getting it right, open, tolerant of different viewpoints, open to criticism, bold about changing our policies and also cautious about changing our policies. We are not vindictive, childish, and we don’t stoop to the level of our worst critics, no matter how much we may find them to be annoying.” – Jimmy Wales

“My view is that good community management is like having good municipal government: You should be able to have dissenting opinions and so on, freedom of speech, but your grandmother should also be able to walk down the street at night without having to worry about getting mugged.” – Jimmy Wales

Now that you know all about Jimmy Wales’ net worth and how he achieved success; let’s take a look at some of the best lessons we can learn from him:

You should be able to have dissenting opinions and so on, freedom of speech.

Imagine a world in which every single person on the planet is given free access to the sum of all human knowledge. That’s what we’re doing.

If you see a blatant error or misconception about yourself, you really want to set it straight.

How much is Jimmy Wales worth?

Jimmy Wales’ net worth is estimated to be $15 Million.

How old is Jimmy Wales?

How tall is Jimmy Wales?

Jimmy Wales is an Internet entrepreneur. Wales is the co-founder of Wikipedia.

He is known for being one of the most influential people in the world. If Wikipedia was not a non-profit, it would be worth a fortune. He was not a millionaire when he interviewed New York Times in 2013.

What do you think about Jimmy Wales’ net worth? Leave a comment below.