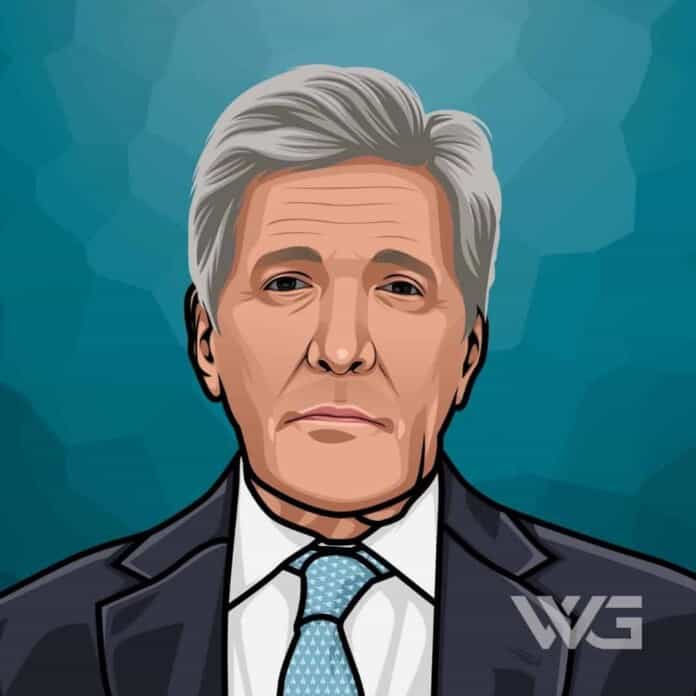 What is John Kerry’s net worth?

John Kerry is an American politician and diplomat. Kerry serves as the United States Special Presidential Envoy for Climate. Kerry previously served as the 68th United States Secretary of State from 2013 to 2017.

He first drew attention as a decorated Vietnam veteran. He was the United States Senator from Massachusetts from 1985 to 2013. Kerry was also the Democratic nominee for President of the United States in the 2004 election.

John Forbes Kerry was born on the 11th of December, 1943, in Colorado. Kerry is the second child to four children. He is the son of Rosemary Forbes and John Kerry Sr.

His family moved around a lot during his father’s military career. Kerry lived in Massachusetts before he moved to Washington, D.C, at the age of 7. His father took a spot in the Department of the Navy’s Office of General Counsel.

In 1966, Kerry joined the Naval Reserve, and he served a four-month tour of duty in South Vietnam as an officer in charge. He then joined the Vietnam Veterans Against the War, which he served as a national spokesman.

After taking his J.D. from Boston College, he started to work as an assistant district attorney and co-founded a private firm. Between the years 1983 to 1985, he served as Lieutenant Governor of Massachusetts. In 2004, he joined the presidential election as a nominee of the Democratic Party.

In 2013, after former President Barack Obama nominated Kerry to succeed Hillary Clinton as Secretary of State, he was confirmed by the US Senate by a 94–3.

The same year, Kelly initiated the Joint Plan of Action. In 2016, he signed the Paris Agreement on climate change on behalf of the United States.

He has served as Secretary of State until the end of 2017, and after that, he retired from government service. Since then, he has remained active in public affairs.

How Does John Kerry Spend His Money?

John Kerry spends his money on luxurious vacations by traveling in private jets and yachts. Kerry has a lot of real estate in his life and currently lives in a home in Massachusetts.

Kerry is a proud owner of a 19-acre property of a home in Massachusetts. The property costs $11.75 million, and it comes with seven bedrooms. He purchased it back in 2017.

Kerry has been seen in a private jet and on yachts multiple times. He likes to travel, and traveling in style it defiantly helps him to live a lavish lifestyle.

Here are some of the best highlights of John Kerry’s career:

“Great physicians and nurses, skilled, caring, and unparalleled in their training, intervened in my life and probably saved it. I was lucky, but other Americans are not. It is time to speak again and stand again for the idea that in the richest nation ever on this planet, it is wrong for 41 million Americans, most of them in working families, to worry at night and wake up in the morning without the basic protection of health insurance.” – John Kerry

“America now stands as the world’s foremost power. We should be proud: Not since the age of the Romans have one people achieved such preeminence. But we are not Romans; we do not seek an empire. We are Americans, trustees of a vision and a heritage that commit us to the values of democracy and the universal cause of human rights.” – John Kerry

“Confronting climate change is, in the long run, one of the greatest challenges that we face, and you can see this duty or responsibility laid down in scriptures, clearly, beginning in Genesis. And Muslim-majority countries are among the most vulnerable.” – John Kerry

“I saw how different life was on different sides of the same city. The fear in the eyes of people who were not free. I saw the gratitude of people toward the United States for all that we had done. I felt goosebumps as I got off a military train and heard the Army band strike up ‘Stars and Stripes Forever.’” – John Kerry

Now that you know all about John Kerry’s net worth and how he achieved success; let’s take a look at some of the lessons we can learn from him:

The solution to climate change is staring us in the face. It’s an energy policy. If we pursue a global clean-energy economy, we can cut dramatically the amount of carbon pollution we emit into the atmosphere and prevent the worst impacts of climate change.

You can’t let concerns stop you; they drive you, and they motivate you.

How much is John Kerry worth?

John Kerry’s net worth is estimated to be $250 Million.

How old is John Kerry?

How tall is John Kerry?

John Kerry is an American politician and diplomat known for being a Senator and the 68th United States Secretary of State. Kerry is a Vietnam veteran who has spoken out about being against the Vietnam War. He returned home as part of “Vietnam Veterans Against the War.”

What do you think about John Kerry’s net worth? Leave a comment below.