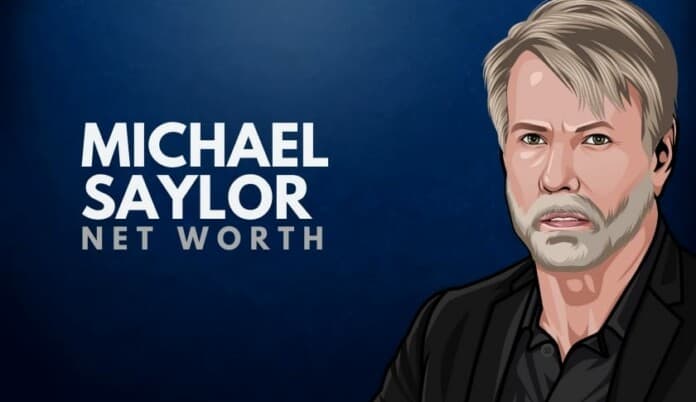 What is Michael Saylor’s net worth?

Michael Saylor is an American entrepreneur and business executive.

Saylor co-founded and leads MicroStrategy. The company is a company that provides business intelligence, mobile software, and cloud-based services.

He authored the book ‘The Mobile Wave: How Mobile Intelligence Will Change Everything in 2012.’ Saylor is also the sole trustee of Saylor Academy.

Michael J. Saylor was born on the 4th of February, 1965, in Lincoln, Nebraska. He spent his early years on various Air Force bases around the world, as his father was an Air Force chief master sergeant.

In 1983, Saylor attended the Massachusetts Institute of Technology on an Air Force ROTC scholarship. He then joined the Theta Delta Chi fraternity, through which he met the future co-founder of MicroStrategy, Sanju K. Bansal.

Saylor was the valedictorian of his high school. He graduated in the top one percent of his class. He joined The Federal Group, Inc, in 1987 and DuPont in 1988.

Saylor co-founded and is the chairman of the board and chief executive officer of MicroStrategy Incorporated. They provide mobile software, cloud-based services, and business intelligence.

MicroStrategy won a $10 million contracted with McDonald’s in 1992. Saylor developed a subsidiary called Angel in 1997 and the company was sold for $110 million in cash.

In 1999, Saylor established The Saylor Foundation. To support his goal of making free education to students, Saylor.org was launched in 2008. The site offers 100 college courses that are supported by free content from universities including MIT and Carnegie Mellon University.

In 2000, the company’s net worth had reached $7 billion. The same year the U.S. Securities and Exchange Commission brought charges against him and his net worth dropped by $6 billion.

In 2012, Saylor wrote ‘The Mobile Wave: How Mobile Intelligence Will Change Everything,’ and the book made the New York Times Best Seller list.

He was named by People Magazine as one of its Most Eligible Bachelors in 2000. He established The Saylor Foundation in 1999 to make free education available to all students.

How Does Michael Saylor Spend His Money?

Here are some of the best highlights of Michael Saylor’s career:

“Bitcoin is a bank in cyberspace, run by incorruptible software, offereing a global, affordable, simple and dsecure savings account to billions of people that don’t have the option or desire to run their own hedge fund.” – Michael Saylor

“I grew up in a family where no one had written a newspaper or magazine article about anybody in my family for a hundred years, right? ” – Michael Saylor

“There’s nothing more frustrating than seeing cynics sit there and say. Nobody can make any more money because Microsoft and Intel own everything. The software industry mature, or is it embryonic? I would say it’s embryonic. There will be a hundred more Microsofts, not just one.” – Michael Saylor

“The basis of the free market is anytime you can generate revenue or profit, you’ve created value in excess of the resources you consume in a society.” – Michael Saylor

Now that you know all about Michael Saylor’s net worth and how he achieved success; let’s take a look at some of the lessons we can learn from him:

When you’re building a company, you need to continually strengthen every component – finance, strategic partnerships, executive team, and relationships with every last constituency.

Companies that make keys, credit card companies, any company in the service business – anything to do with a consumer is probably a software company.

How much is Michael Saylor worth?

Michael Saylor’s net worth is estimated to be $500 Million.

How old is Michael Saylor?

How tall is Michael Saylor?

What do you think about Michael Saylor’s net worth? Leave a comment below.

What is Madonna's net worth? Introduction As of , Madonna's...

One of the highest-paid defensive players in the NFL, Ndamukong Suh, has earned millions with his aggressive playstyle.