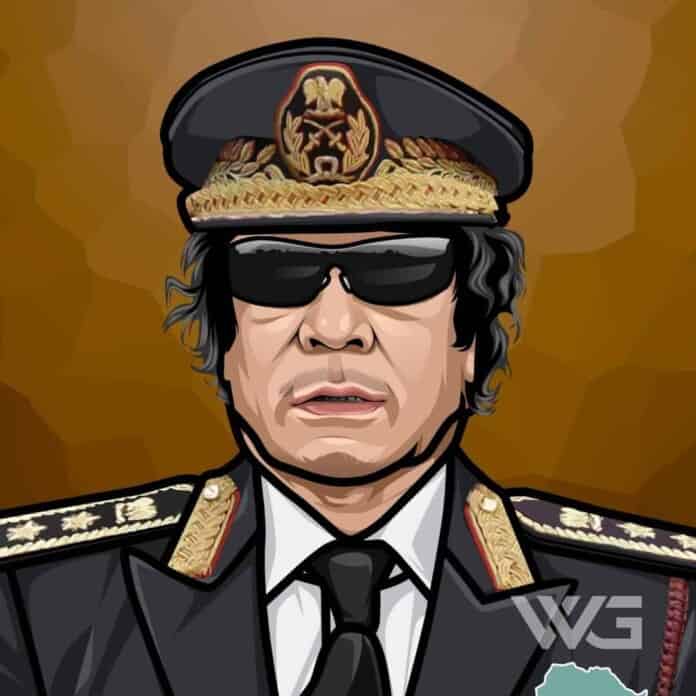 What was Muammar Gaddafi’s net worth?

Muammar Gaddafi was a Libyan politician. Gaddafi governed Libya as Revolutionary Chairman of the Libyan Arab Republic from 1969 to 1977 and then as the “Brotherly Leader” of the Great Socialist People’s Libyan Arab Jamahiriya from 1977 to 2011.

Gaddafi was committed to Arab nationalism and Arab socialism but later ruled according to his own “Third International Theory.”

Muammar Muhammad Abu Minyar al-Gaddafi was born on the 7th of June, 1942, in Libya. He came from a tribal family called the al-Qadhafah. When he was born, Libya was an Italian colony. In 1951, Libya gained independence under the Western-allied King Idris.

When he was younger, he was influenced by the Arab nationalist movement. He admired the Egyptian leader Gamal Abdel Nasser. In 1961, he entered the military college in Benghazi. He spent four months receiving military training in England.

Gaddafi’s first order of business was to shut down the American and British military bases. He demanded that foreign oil companies in Libya should share a bigger portion of revenue with the country.

He was critical of the US’s support of Israel. Gaddafi sided with Palestinians in Israeli – Palestinian conflicts and opposed the 1948 creation of the State of Israel, viewing this himself as a Western colonial occupation influence that was forced upon the larger Arab world.

In 1983, Libya commenced its largest infrastructure project, “the Great Man-Made River,” which fell behind schedule and remained incomplete until the 21st century.

Gaddafi had grown increasingly frustrated from what he viewed as the failures of pan-Arab ideals. He was beginning to reject his Arab nationalistic ideals and grew more and more in favor of pan-Africanism, which highlighted and celebrated Libya’s African identity.

How Did Muammar Gaddafi Spend His Money?

Muammar Gaddafi was one of the richest men alive before he died, and he spent his money on real estate and other investments around the world.

Gaddafi had a hidden fortune of bank accounts, real estate, and investments worldwide. His personal control over Libya’s vast oil fields is believed to be the primary contributor to wealth.

Before his death, he owned a lot of lavish cars. In his collection, we can see cars such as a Fiat 500, a VW Beetle, an Armored BMW 7 Series, a Mercedes S Class. He also owned a private jet.

Here are some of the best highlights of Muammar Gaddafi’s career:

“There are signs that Allah will grant Islam victory in Europe – without swords, without guns, without conquests. The 50 million Muslims of Europe will turn it into a Muslim continent within a few decades.” – Muammar Gaddafi

“Americans are good people. They have no aggressions against us, and they like us as we like them. They must know I don’t hate them. I love them. I hear it is a complex society inside. Many Americans don’t know about the outside world. The majority have no concern and no information about other people. They could not even find Africa on a map.” – Muammar Gaddafi

“There are serious mistakes, among them the one saying that Jesus came as a messenger for other people other than the sons of Israel. Christianity is not a faith for people in Africa, Asia, Europe, and the Americas. Other people who are not sons of Israel have nothing to do with that religion.” – Muammar Gaddafi

“Let the free people of the world know that we could have bargained over and sold out our cause in return for a personal secure, and stable life. We received many offers to this effect, but we chose to be at the vanguard of the confrontation as a badge of duty and honor.” – Muammar Gaddafi

“Once a ruler becomes religious, it becomes impossible for you to debate with him. Once someone rules in the name of religion, your lives become hell.” – Muammar Gaddafi

Now that you know all about Muammar Gaddafi’s net worth and how he achieved success; let’s take a look at some of the lessons we can learn from him:

To force a human being to learn from a set curriculum is a dictatorial act.

There must be a world revolution that puts an end to all materialistic conditions hindering women from performing their natural role in life and driving them to carry out man’s duties to be equal in rights.

Nations whose nationalism is destroyed are subject to ruin.

How much is Muammar Gaddafi worth?

Muammar Gaddafi’s net worth is estimated to be $200 Billion.

How old is Muammar Gaddafi?

How tall is Muammar Gaddafi?

Muammar Gaddafi is the former president of Libya. He was one of the longest-serving rulers of Libya since the Ottoman Empire.

His 42-year reign has been the subject of much controversy. From an early age, he showed the signs of becoming a revolutionary. National Transitional Council resulted from his increased dominance, violation of human rights, and support for international terrorism.

What do you think about Muammar Gaddafi’s net worth? Leave a comment below.