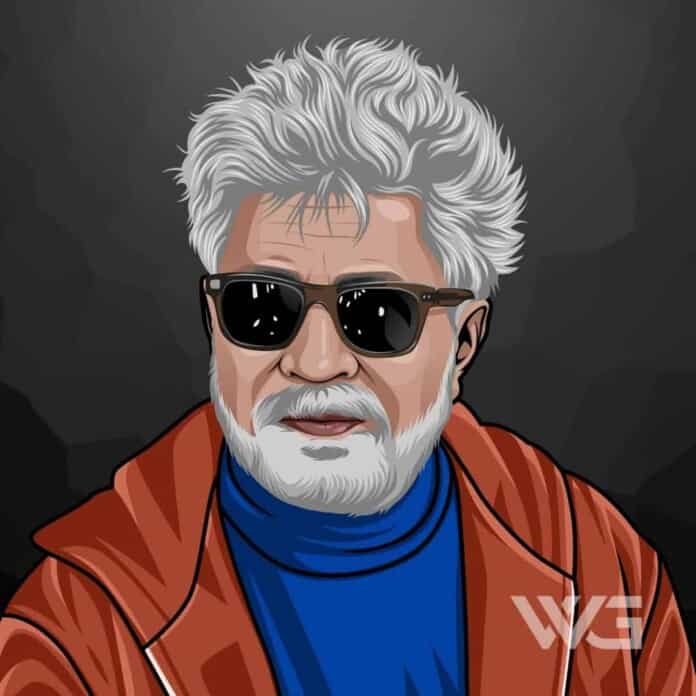 What is Pedro Almodovar’s net worth?

Pedro Almodovar is a film director, producer, and actor.

Almodovar’s movies are marked by irreverent humor and quotations from popular culture. Passion, family, desire, and identity are among the most prevalent subjects in his films. Some of his most notable films include ‘The Skin I Live In’ and ‘Julieta.’

Pedro Almodovar Caballero was born on the 25th of September, 1949, in Spain.

He has two sisters and one brother. His father was a winemaker, and his mother was a letter reason and transcriber for illiterate neighbors.

When he was 8 years old, the family sent him to study at a religious school in western Spain. They eventually joined him at the study he studied in, where his father opened a gas station, and his mother opened a bodega.

From 1970 to 1981, Almodovar was employed as a clerk and later as an administrator.

In the late 1960s and 1970s, he wrote comics articles and stripes for Star, Vibora, and Vibraciones.

He formed his first production company, El Deseo in 1985. In 1988, he dropped his biggest hit, ‘Women on the Verge of a Nervous Breakdown’ which was one of the highest-grossing films in Spain.

It also became one of the highest-grossing films in the U.S in 1989. The follow-up was not well received by the critics, and it collected $4 million in the box office in the United States.

The following year, Almodovar came up with the comic melodrama, ‘High Heels’ and ‘Kika.’ His film ‘The Flowers of My Secret.’ His movie, ‘All About My Mother,’ won many awards, including the Director’s Prize at the Cannes Film Festival.

In 2002, he directed ‘Talk to Her’ which won much critical acclaim and was nominated for a British Academy Award for “Best Original Screenplay.”

Here are some of the best highlights of Pedro Almodovar’s career:

“Both sex and death are eternal themes. You could make thousands of movies on this theme, and whether you have a human being who is painting, singing, making a film, writing, these are the themes that you will come back to and return to. If you don’t have any of these artistic expressions, sex is one of the only gifts that nature gave you for free.” – Pedro Almodovar

“I tried to think about these two issues very freely. With sex, I think I can manage with that. With death, this is a more difficult theme for me. I’m not a believer, even though I’m baptized. I don’t practice. I don’t believe in God, so I feel very alone facing death.” – Pedro Almodovar

“As a woman, Penelope Cruz has changed as she has become an adult. But, as an actress, she has not changed that much. She has something great, especially in comedy, and she hasn’t been exploited as much as she could be in comedy, but particularly in that mix between comedy and drama.” – Pedro Almodovar

“I’m a very dull passenger. I don’t speak. I don’t have sex. No alcohol. I don’t do drugs. The thing that I like about flying is that I feel like I can really concentrate. I used to write many things, and many ideas for my movies belong to this moment where I’m not anywhere specifically in terms of time and space, and geography. I am suspended, and this suspension fits me very well.” – Pedro Almodovar

Now that you know all about Pedro Almodovar’s net worth and how he achieved success; let’s take a look at some of the best lessons we can learn from him:

Cinema can fill in the empty spaces of your life and your loneliness.

Always enjoy what you’re doing, if not, then what is the point?

Life gets much better when we smile.

How much is Pedro Almodovar worth?

Pedro Almodovar’s net worth is estimated to be $20 Million.

How old is Pedro Almodovar?

How tall is Pedro Almodovar?

Pedro Almodovar is a Spanish film director and producer. Almodovar was born in Ciudad Real, Spain.

He started his career with a Spanish film production company with his younger brother, who has also produced most of his movies. In 2001, he was elected a Foreign Honorary Member of the American Academy of Arts and Sciences.

What do you think about Pedro Almodovar’s net worth? Leave a comment below.