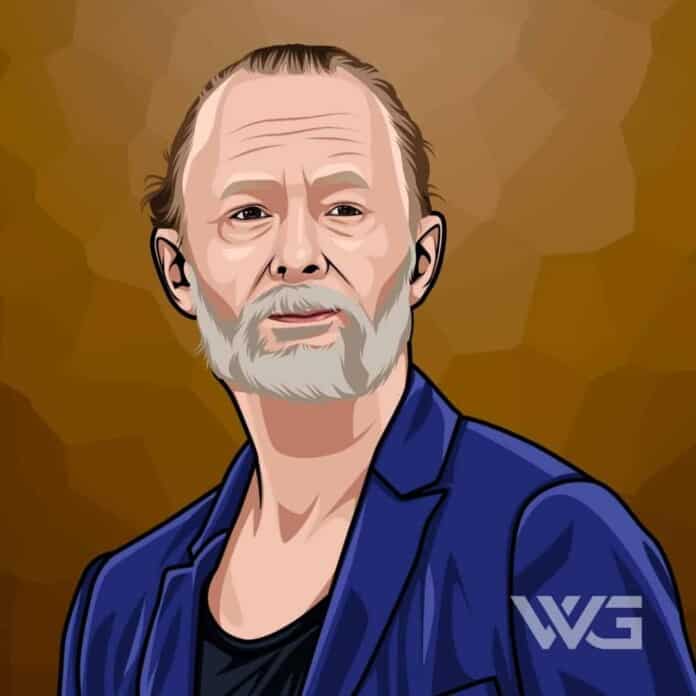 What is Thom Yorke’s net worth?

Thom Yorke is an English musician. Yorke is the main vocalist and songwriter of the rock band Radiohead.

He mainly plays guitar and keyboards and is known for his falsetto. After he graduated, the band signed to Parlophone, and they got sales of over 30 million albums. His early influences included alternative rock acts such as the Pixies and R.E.M.

Thom Yorke was born on the 7th of October, 1968, in Wellingborough, Northamptonshire. Yoke underwent five eye operations by the age of 6.

The family moved often, and shortly after his birth, his father was hired by a firm in Scotland; the family lived in Lundin Links until Yorke was 7 years old.

In 1992, Radiohead released the track ‘Creep,’ and it became the top 10 hits in the U.K., Australia, France, and Belgium, and it reached spot number two on the “Billboard” Alternative Airplay chart. Their debut album ‘Pablo Honey’ went platinum twice in the U.K. and Canada.

Yorke dropped his first solo album ‘The Eraser’ while Radiohead was on hiatus in 2004. The album earned a Grammy nomination for “Best Alternative Music Album.” He followed this up with the E.P ‘Spitting Feathers’ in 2006.

His second album ‘Tomorrow’s Modern Boxes’ was not released until 2014. In 2019, his third solo album, ‘Anima,’ was released with an accompanying Paul Thomas Anderson-directed short film nominated for a Best Music Film Grammy.

How Does Thom Yorke Spend His Money?

Yorke has supported different charities. Some of the charities he has donated money to include Greenpeace
Silverlake Conservatory of Music and The Royal British Legion.

Here are some of the best highlights of Thom Yorke’s career:

“I think artists can influence only through making music that challenges people, excites them, and flips them out. Music that repeats what you know in ever-decreasing derivation, that’s unchallenging and unstimulating, deadens our minds, our imagination and our ability to see beyond the hell we find ourselves in.” – Thom Yorke

“Maybe since there isn’t a great deal of access to the mainstream media and people don’t understand the language of mainstream media, if you put music out there with lyrics that are loosely political, people absorb some of it and spit it back out.” – Thom Yorke

“One of the interesting things here is that the people who should be shaping the future are politicians. But the political framework itself is so dead and closed that people look to other sources, like artists, because art and music allow people a certain freedom.” – Thom Yorke

“I had a series of mini-breakdowns where the public persona – this thing, this face, this person who writes this music… I would walk past that person in the mirror or listen to that person playing guitar, and I didn’t know who they were.” – Thom Yorke

“People in bands don’t have the kind of conversations people might think they have. The best things about being in a band are the unsaid things.” – Thom Yorke

“I think no artist can claim to have any access to the truth or an authentic version of an event. But obviously, they have slightly better means at their disposal because they have their art to energize whatever it is they’re trying to write about. They have music.” – Thom Yorke

Now that you know all about Thom Yorke’s net worth and how he achieved success; let’s take a look at some of the lessons we can learn from him:

I think the most important thing about music is the sense of escape.

As musicians, we need to fight the Spotify thing. Yorke means that in some ways, what’s happening in the mainstream is the last gasp of the old industry. Once that does finally die, which it will, something else will happen.

The people in charge, globally, are maniacs. They are maniacs, and unless we do something about it, these people are going to deprive us of a future.

How much is Thom Yorke worth?

Thom Yorke’s net worth is estimated to be $45 Million.

How old is Thom Yorke?

How tall is Thom Yorke?

Thom Yorke is an English musician, singer, and songwriter who is the lead singer and songwriter for the band Radiohead. He has released nine studio albums with Radiohead and three solo albums.

Radiohead has sold more than 30 million records. The band is considered to be one of the biggest art-rock acts since Pink Floyd.

As the lead singer of Atoms of Peace, he was considered one of the most influential music figures and was included in Rolling Stone’s “100 Greatest Artists of All Time”. His fame and popularity have brought out the environmentalist and humanitarian in him as he has spoken about various social and contemporary issues.

What do you think about Thom Yorke’s net worth? Leave a comment below.