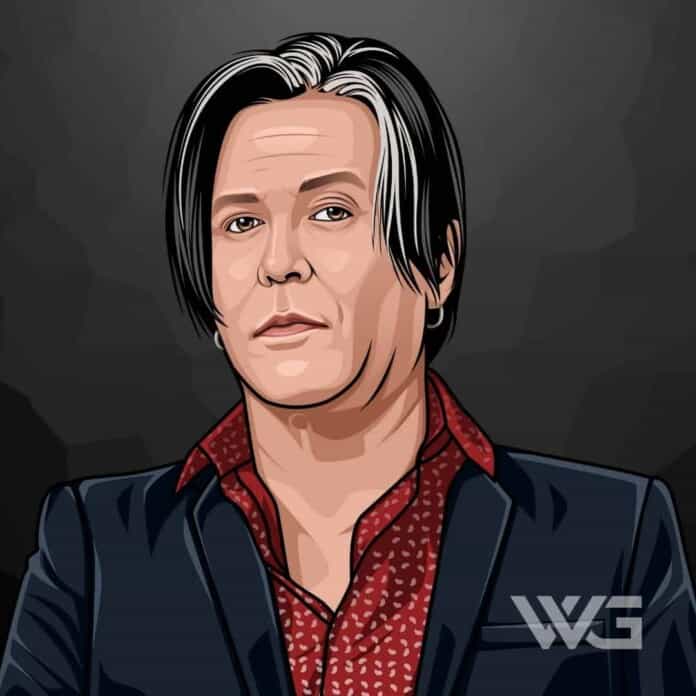 What is Troy Van Leeuwen’s net worth?

Troy Van Leeuwen is a musician and record producer.

Leeuwen is best known for being the guitarist in the rock band Queens of the Stone Age. With the band, he has recorded four studio albums.

In 2002, he joined the band, and he is the second longest-serving member of the band. He is also a member of the group Gone Is Gone.

Troy Van Leeuwen was born on the 5th of January, 1970, in Los Angeles.

He has ancestors from the Netherlands, and he has described himself as a third-generation American.

Leeuwen has been interested in music since he was a kid. He would often watch his dad play early rock and roll records such as Chuck Berry. Playing drums regularly, he sought to imitate Zeppelin, John Bonham, ut later switched to guitar.

After switching to the guitar, he discovered that he had an aptitude for it. He had Jimmy Page as a huge influence. he was playing in various local bands such as 60 Cycle and Jester.

He has also worked as a session musician for various bands, and he met Billy Howerdel who later recruited him to play guitar in the alternative rock supergroup, A Perfect Circle. Their debut album ‘Mer De Noms’ was their highest ever debut for a rock band, and it sold 188,000 copies in its first week.

After recording three tracks on their second album, he auditioned for Josh Homme‘s Queens of the Stone Age. In addition to guitar, he was also required to play keyboards and lap steel.

After joining the band, he played on three albums, ‘Lullabies to Paralyze,’ ‘Era Vulgaris’ and ‘Like Clockwork.’ Since then, he has recorded with various band members such as The Desert Sessions, Mondo Generator, Eagles of Death Metal, and The Gutter Twins. In 2005, he created his first side project and moved to the new project later on, called Sweethead.

How Does Troy Van Leeuwen Spend His Money?

Van Leeuwen owns a beautiful home in Woodland Hills, which he purchased for $2.325 million. It comes with a master suite bedroom, six bedrooms, and five bathrooms.

Here are some of the best highlights of Troy Van Leeuwen’s career:

“I didn’t really remember what I played since it was so long ago. It took me a while to figure out which songs I played on, since they had different titles and arrangements at that time. Honestly, the mixes sound so insane with distortion. It’s hard to tell what the fuck is going on.” – Troy Van Leeuwen

“I can’t answer that question due to one of the many NDAs I had to sign to get my check. But I will say that they required me to wear certain ‘attire’ while recording these tracks. It takes a lot of money to get me out of my robe and slippers.” – Troy Van Leeuwen

“I guess it represents the brighter side of me. It’s also a homage to California, which is where I grew up. Before I was playing music and being a dark teenager, I was a kid that was always at the beach.” – Troy Van Leeuwen

“I have a switch for the top selector instead of the black slider. That’s just a performance thing – because I play other instruments on stage, I need to switch between things – so I tend to turn that circuit off and use it as a killswitch.” – Troy Van Leeuwen

“That way I can go straight to keys or lap steel, flip one switch and be right back in the game. That feature ended up being really important. I play this guitar right out of the box on stage. It’s a real deal signature model. Occasionally I’ve tried other bridges and tremolos, but it comes ready to stay in tune and take pedals well.” – Troy Van Leeuwen

Now that you know all about Troy Van Leeuwen’s net worth and how he achieved success; let’s take a look at some of the best lessons we can learn from him:

With hard work and effort, you can achieve anything.

Work harder than you think you did yesterday.

Luck is great, but most of life is hard work, that is how it works.

How much is Troy Van Leeuwen worth?

Troy Van Leeuwen’s net worth is estimated to be $8 Million.

How old is Troy Van Leeuwen?

How tall is Troy Van Leeuwen?

Troy Van Leeuwen is a musician and producer. He was born in California and he grew up listening to rock and roll which inspired him to be a musician as well.

His first big influence in learning how to play rock came through listening to Led Zeppelin records. This is just another example of someone who has a dream, and who pursued it to be something bigger. Never give up on your goals.

What do you think about Troy Van Leeuwen’s net worth? Leave a comment below.