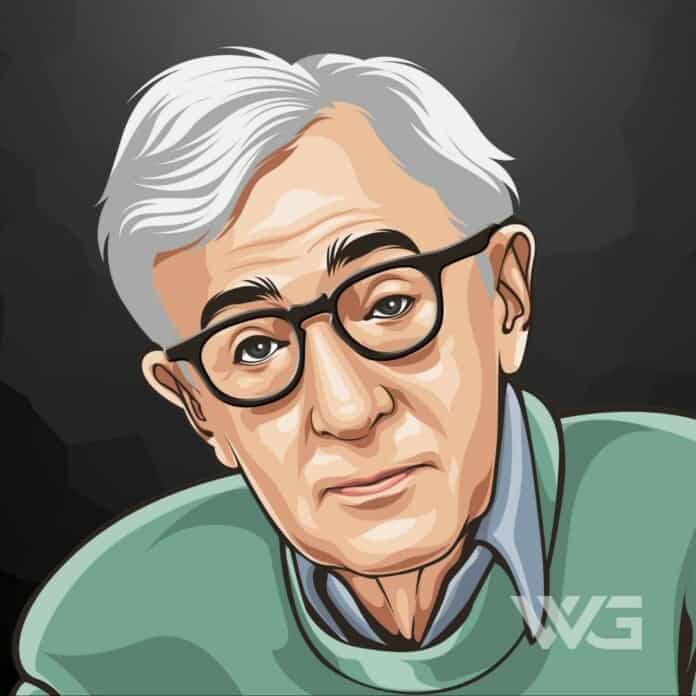 What is Woody Allen’s net worth?

He began his career as a comedy writer in the 1950s, writing jokes and scripts for television and publishing several books of short humor pieces.

Allan Stewart Konigsberg was born on the 1st of December, 1935, in Brooklyn, New York. He is the son to Nettie and Martin Konigsberg, Woody Allen was the first child of the two children of the couple.

Allen’s childhood was not a very remarkable one – the tempestuous relationship of his parents and the temperamental nature of his mother Nettie left a bad impact on young Allen.

Allen’s career took shape when he was still in high school. He started writing monologues and became a full-time humourist. His career took off in the year 1954 when he assisted Caesar in writing scripts for shows such as The Ed Sullivan Show.

Allen inherited the nature of work wanderlust from his father, jumping from one project to the other when he got bored. As such, in 1961, he tried his hand at stand-up comedy, his debut being at a Greenwich Village Club, called Duplex.

The big break, however, came in 1965 when Allen wrote the screenplay for the film, “What’s New, Pussycat?”

However, disappointed with the changes brought in the final product, Allen swore to never write another script unless he was the director of the film.

The 1990s saw Allen switch back to lighter comedy. His films not only gained an appreciation of the crowd but also earned him quite a few Academy Award nominations.

Here are some of the best highlights of Woody Allen’s career:

“Everybody knows how awful the world is and each person distorts it in a certain way that enables him to get through. Some people distort it with religious things, others with sports, money, love, art, and they all have their own nonsense about what makes it meaningful, and all but nothing makes it meaningful. These things definitely serve a certain function, but in the end, they all fail to give life meaning and everyone goes to his grave in a meaningless way.” – Woody Allen

“In the shower, with the hot water coming down, you’ve left the real world behind, and very frequently things open up for you. It’s the change of venue, the unblocking the attempt to force the ideas that are crippling you when you’re trying to write.” – Woody Allen

“Life is horrible, but it is not relentlessly black from wire to wire. You can sit down and hear a Mozart symphony, or you can watch the Marx Brothers, and this will give you a pleasant escape for a while. And that is about the best that you can do.” – Woody Allen

“I can’t with any conscience argue for New York with anyone. It’s like Calcutta. But I love the city in an emotional, irrational way, like loving your mother or your father even though they’re a drunk or a thief. I’ve loved the city my whole life – to me, it’s like a great woman.” – Woody Allen

“I feel humor is important for those two reasons: that it is a little bit of refreshment like music, and that women have told me over the years that it is very, very important to them.” – Woody Allen

Now that you know all about Woody Allen’s net worth, and how he achieved success; let’s take a look at some of the lessons we can learn from him about love:

1. We Only Want What We Can’t Have

Whether it’s the sweet yet unattainable ingénue (Manhattan) or the grandeur of another era (Midnight in Paris, in some senses Love and Death), we always pine for the unrealistic.

2. How Someone Handles Live Lobsters Says a lot About His or Her Personality

Remember that scene in Annie Hall where Annie and Alvy (neurotically) decide they’re going to (neurotically) cook lobsters for dinner, and the next thing you know their kitchen’s being (neurotically) overtaken by the tricky crustaceans?

There are two lessons to be learned from this.

3. Living in the Past Won’t Move You Forward

As we learned in Midnight in Paris, the past can sometimes have a magical, nostalgic quality to it that makes us yearn to recreate it. But the past always looks better in hindsight.

It’s easy to forget all the reasons that we are where we are today. Want to be happy in the present? Start living in it.

How much is Woody Allen worth?

Woody Allen’s net worth is estimated to be $140 Million.

How old is Woody Allen?

How tall is Woody Allen?

Woody Allen still stands strong for his age in the entertainment industry and is respected by the world for his ability to express his feelings and emotions using slapstick humor.

Allen has given the world numerous movies and theatrical works that are going to be influential and inspirational for the sheer sense of novelty and ingenuity that they carry.

As of December 2022, Woody Allen’s net worth is approximately $140 Million.

What do you think about Woody Allen’s net worth? Leave a comment below.