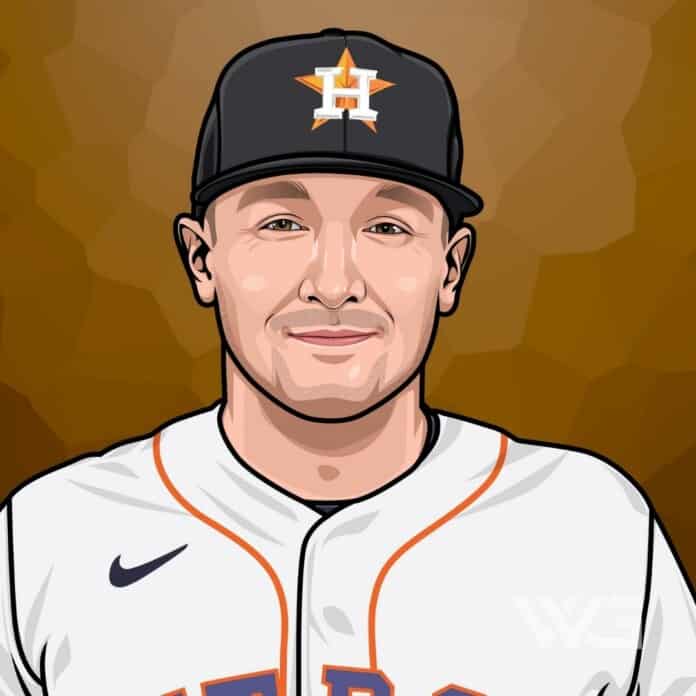 What is Alex Bregman’s net worth?

Alex Bregman is an American professional baseball third baseman and shortstop for the Houston Astros of MLB.

As a junior the following year, he batted .678 while setting a New Mexico season record with 19 home runs.

Alexander David Bregman was born on the 30th of March, 1994, in Albuquerque, New Mexico.

Bregman was raised in the Northeast Heights section. He is Jewish and was a member of Albuquerque’s Congregation Albert growing up.

When he was 13 years old, he stated: “I want to be a professional athlete who plays for the love of the game, never quits trying to give my best, and is a good role model for all of the kids who look up to baseball players.

The Houston Astros selected Bregman with the second overall selection in the first round of the 2015 MLB Draft. He became the fifth LSU Tiger to be drafted in the first round in seven years, the highest-drafted position player in LSU’s history.

Bregman signed with the Astros in June 2015 for a $5.9 million signing bonus. He made his professional debut with the Quad Cities River Bandits of the Class A Midwest League in late June. In late July 2015, the Astros promoted Bregman to the Lancaster JetHawks of the Class A-Advanced California League.

He started 2016 with the AA Corpus Christi Hooks in the Texas League, hitting .297 with 14 home runs and a .975 OPS, was named the league’s Player of the Week on April 17, and was named a AA mid-season All-Star.

How Does Alex Bregman Spend His Money?

Alex Bregman spends some of his money on real estate and sneakers.

Bregman owns a home in Houston. In his home, he also has a massive sneaker collection.

Here are the best highlights of Alex Bregman’s career:

“Don’t think I’ve changed very much. I think I’m the same kid that I was when I got here. When I came here, all I wanted to do was win games. I wanted to play baseball for LSU and be the ultimate team player. That’s all I want to do. If we don’t end up being the last team to win the game at the end of the year, I won’t be happy. That’s all I’m worried about this year.” – Alex Bregman

“All these freshmen have come in here and worked hard from the beginning. I can’t say enough good things about them. They were the No. 1 recruiting class in the country, and they’re confident. They know they are the best. That doesn’t mean they slack off. They work really hard. Now it’s time to go out there and compete.” – Alex Bregman

“Does Tiger Woods tee off at 8 A.M. when he’s going to win a Masters? Does Floyd Mayweather fight the first fight of the night? No, he’s the main event. So the ‘Stros need to be playing on prime-time television.” – Alex Bregman

“It makes everything worth it; every weight that you lifted in the offseason, every swing that you took in the cage. When you feel like you came through for your team, and you see the joy on their faces, there’s nothing like it.” – Alex Bregman

“My agent called me and said, ‘You’re going to be on the cover of ‘R.B.I. Baseball.” I was like, ‘Are you serious?’ It’s unbelievable. A dream come true. I was yelling into the phone. I was super excited.” – Alex Bregman

Now that you know all about Alex Bregman’s net worth, and how he achieved success; let’s take a look at some of the lessons we can learn from him:

You will never be happy if you continue to search for what happiness consists of. You will never live if you are looking for the meaning of life.

Life will not always be easy. Some people will pick on you. Stand up for yourself.

How much is Alex Bregman worth?

Alex Bregman’s net worth is estimated to be $10 Million.

How old is Alex Bregman?

How tall is Alex Bregman?

Alex Bregman is an American professional baseball who currently plays for the Houston Astros of MLB.

His professional MLB career started in 2016. Bregman is a 2-time All-Star winner. Bregman made his MLB debut in July 2016.

He started in 2017 as the youngest member of Team USA, which won the gold medal in the 2017 World Baseball Classic.

What do you think about Alex Bregman’s net worth? Leave a comment below.

Hulk took the Brazilian soccer world by storm, becoming incredibly wealthy and earning huge fees playing for the richest clubs in the world.