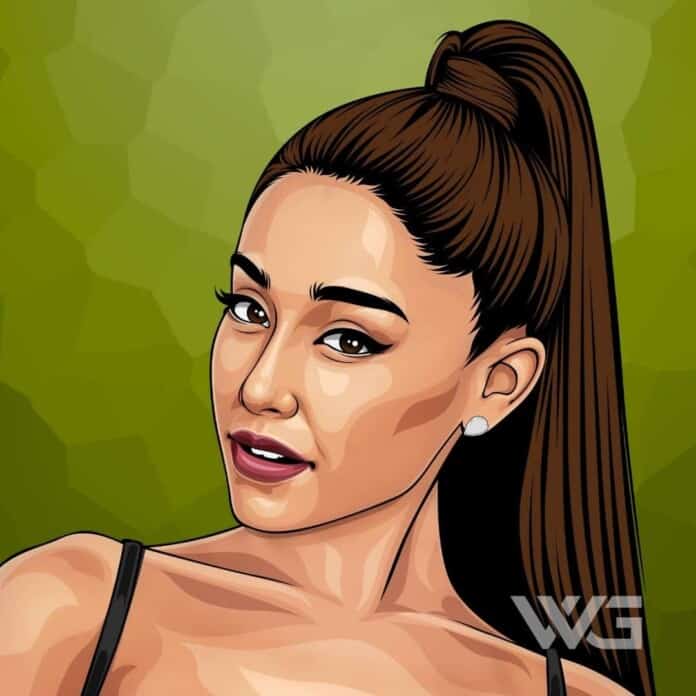 What is Ariana Grande’s net worth?

As of February 2023, Ariana Grande’s net worth is estimated to be roughly $220 Million.

Ariana Grande-Butera is an American actress and singer from Boca Raton.

Grande initially gained recognition when she played the role of ‘Cat Valentine’ in the Nickelodeon television series ‘Victorious’ and in ‘Sam & Cat’.

Grande has also appeared in multiple theatre and television roles and lent her voice to animated films and television. She started her career as a singer in 2011 with the soundtrack movies from ‘Victorious’.

Today she is one of the 100 most influential people in the world.

Ariana Grande-Butera was born in Boca Raton, Florida on the 26th of June, 1993. Grande is of Italian descent and is the daughter to Edward Butera and Joan Grande.

Ariana’s family moved to New York when her mother was pregnant with her, and her parents separated when she was 8 years old.

When she was 13 she became serious with her music career and started to concentrate on theater. Grande later become one of the cast in the Nickelodeon television show ‘Victorious’ along with co-star Elizabeth Gillies.

Grande pursued her musical career after she featured on the soundtrack of the series.

After her acting debut in ‘Victorious’, her voice got attention by Monte Lipman who was a top executive of the Republic Records. Grande signed with the record label in 2011 and her debut single ‘Put Your Hearts Up’ was released.

Grande released her debut album ‘Yours Truly’ in 2013 and within a month the album had a top spot in the US Billboard 200.

The song ‘The Way’ received a lot of acclaims and secured the 10th spot on the Billboard Hot 100. Grande released her first EP ‘Christmas Kisses’ around the same time her television film ‘Swindle’ was on ‘Nickelodeon’.

Two of the tracks from the album titled ‘Break Free’ and ‘Problem’ became big hits worldwide. Both of the songs bagged the No.3 and No.4 on the Billboard Hot 100.

She returned to acting in 2015 through the comedy-horror TV show ‘Scream Queens’ which later was aired on the ‘Fox Channel’. The following year she dropped her third album ‘Dangerous Woman’.

Today, Grande is a pop queen and has collaborated with producers and famous artists all over the world, including Mac Miller, Big Sean, Zedd, and Meghan Trainor. She has also become an icon for equality and feminism.

Here are some of the best highlights of Ariana Grande’s career:

“I’ve learned how to balance that out and be a loving partner but also nourish myself. A lot of people forget about the whole self-love thing when they’re in love, and both are imperative.” – Ariana Grande

“I’ve never looked at love as something that I need to complete me. I would like to be complete on my own first and fall in love with somebody who is also complete. You can still celebrate and be totally obsessed with each other, but I want to feel a hundred percent myself so that I can love that person better.” – Ariana Grande

“I’m not going to do anything crazy, but I want to do music that I’m passionate about. I’m finally at an age where I can do the music that I grew up loving, which was urban pop, ’90s music. I grew up listening to the divas, so I’m very happy to finally do urban pop. I hope that it’s received well, and it has been so far.” – Ariana Grande

“Every day, my mom and I would watch a different Judy Garland VHS. I love how she tells a story when she sings. It was just about her voice and the words she was singing – no strings attached or silly hair or costumes, just a woman singing her heart out. I feel like that doesn’t happen that much anymore.” – Ariana Grande

Now you know all about Ariana Grande’s net worth, and how she achieved success; let’s take a look at some of the lessons we can learn from her:

1. Everyone is a little weird

2. You can’t please everyone

Making everyone happy is impossible no matter you will do in life. When people like us, that means we’re fit in, we’re wanted and valued. Not everyone can be pleased, and that is okay.

3. Always keep your head up

Always keep your mind full with positivity, your head up and a big smile on your face. It is important to follow what you believe is right. If you aren’t over your head, how do you know how tall you are?

How much is Ariana Grande worth?

Ariana Grande’s net worth is estimated to be $220 Million.

How old is Ariana Grande?

How tall is Ariana Grande?

Ariana Grande is just at the beginning of her musical career. She already has millions of listeners all over the world and she has collaborated with some of the best artists in the world. Today she is one of the most popular singers in Hollywood.

As of February 2023, Ariana Grande’s net worth estimated to be roughly $220 Million.

What do you think about Ariana Grande’s net worth? Leave a comment below.

What is Adam Beyer's net worth?  Introduction  Adam Beyer is a...