The 10 Most Expensive Camera Lenses in the World

The 10 Most Expensive Minerals in the World

The 10 Most Expensive Pizzas in the World

The 10 Most Expensive Perfumes in the World

The 10 Most Expensive Backpacks in the World

The 10 Most Expensive Starbucks Drinks in the World

The 10 Most Expensive iPhone Cases in the World

The 15 Most Expensive Penthouses in the World

First released in the late ’50s, Lego has become an iconic toy, that’s loved and appreciated by millions around the world.

In fact, it’s loved by so many that some of the Lego sets listed below are fetching insane prices… like $4,276 for a slice of pizza!!

Anyway, here’s our list of the 20 most expensive Lego sets in the world.

The list of Lego sets and figures mentioned below have been compiled from various sources around the web, such as The Gamer & The Daily Dot.

These are the 20 most expensive Lego sets in the world:

Kicking off the list is this awesome head bust of Darth Maul.

If you don’t know who he is, then I suggest you watch Star Wars: Episode I – The Phantom Menace.

This lego set contains over 1800 individual pieces, making one hell of a set to complete.

If you have the time, patience and desire to put together a set like this, then you could earn yourself some serious bragging rights in your lego social circle!

One of the biggest lego sets on our list is the Rebel Blockade Runner.

It’s pretty gigantic, to say the least, and is made up of over 1700 pieces and is from Star Wars Episode IV: A New Hope.

If you’re also a Star Wars fan then you should seriously think about adding this to your collection, as you’ll get some major kudos!

Yet another Star Wars-themed lego set, this time from The Empire Strikes Back.

This Rebel Snowspeeder seems to be a little more popular the previous two, and for no apparent reason.

Apart from the fact it might be slightly easier to put together as it has fewer pieces, around 1,457 to be exact, the Snowspeeder would just be another cool set to add to your collection!

If you have the cash, then why not?!

Breaking out of the Star Wars Bonanza is legos rendition of the Eiffel Tower, released in 2007.

With 3428 pieces, this is the tallest lego set on the market and should only be attempted if you have the dedication and endurance to see it through!

It was built to 1:300 scale from the real tower’s original blueprints. 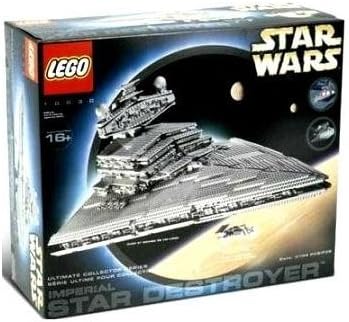 LEGO 10030 - Star Destroyer
$2,399.00
Check Price On Amazon
We earn a commission if you click this link and make a purchase at no additional cost to you.
Related:  The 10 Best Investment Apps to Grow Your Wealth

Next on the list of the most expensive lego sets in the world is by far the coolest Star Wars set on the planet – The Imperial Star Destroyer!

If you’re a Star Wars fan then you understand what this is, and why it’s so cool to be able to make it in lego.

It has just over 3,000 pieces and is approximately 3 meters long.

So, if you add this to your collection, make sure you have the room before you start building it!

Continuing on with the Star Wars theme, we have the V.I.P Gala Set, including Darth Vadar, released at the Lego Toy Fair in 2005 to promote Revenge of The Sith.

Being one of the rarest Lego sets in the world, it’s hard to figure out its true value.

However, as it’s so rare, it kind of justifies its current asking price as you’d expect most rare or exclusive items to be expensive, right?

Nevertheless, it’s cool as hell so sometimes it’s worth biting the bullet and paying the dollar!

Batman is cool on his own, but have a Batman Lego set, that’s limited Edition is even cooler!

They were pretty easy to get at Sandiego’s Comic-Con in 2005, but many people didn’t hang on to it, instead opting for trading, swapping, or selling it.

If you were smart, or just lucky, and managed to grab yourself one when they were first released, you’d be sitting on a nice $1,720 now.

With such an awesome name, and being so iconic, it’s no surprise that the Death Star II is one of the most expensive lego sets in the world!

To put this thing together, you’ll need to place all 3,000 pieces in their exact places and have the room to move around whilst you’re doing it.

When all is said and done, it will definitely be worth your time and effort, to see this magnificent lego set in all its glory!

Next up, we have a lego set that represents one of the most iconic statues in the world – The Statue of Liberty.

For just over $2,000, you get 3,000 pieces and the satisfaction of looking at the finished product once you’ve put it all together.

However, if you’re in a position where you have to choose between a really cool lego set or your next car, then you might want to hold off buying this one for a while… or just buy it and walk!

With just over 2,056 pieces, the Cafe Corner lego set features three different stories, a bicycle, and a mosaic.

Not the most interesting of sets, however, it’s still pretty cool to look at, and would look cool in a collection.

If you’re looking to spend $1,714 on a lego set, then it might be a better option to put that money toward one of the upcoming more expensive lego sets.

Breaking into our top ten of the most expensive lego sets in the world is this hilarious set.

Released in 2013 at the New York Toy Fair, this set features Yoda wearing a t-shirt that says “I heart NY”, some really cool street art and street signs.

In terms of actual goods received, you don’t really get a lot for your money, however, you’re paying for the individuality of the piece plus a bit of coolness!

Coming in at number 9 of our list is this no-nonsense set.

The Carousel has 3,000 pieces and comes with remote control. It’s fully functional as well, meaning that you can actually use/play with it.

It is a pretty big set when all is said and done, but unlike some of the previous lets on our list, you can kind of see it being relatively manageable to build, right?

If cars are your thing, or you’re looking for something a little different to build next, then the LECA Automobile might be for you.

It’s not the coolest or most pretty looking lego set, however, it’s different and rare.

So, I guess if you’ve got $2,350 to spend on a lego set, then give this one some consideration if you’re into cars, or put the money toward one of the top 5 most expensive lego sets in the world.

Trains are cool, right? Well, if you like them then the Legoland Train will be right up your street.

Not only do you get the train to build but you also get seven Mini-figures to lark about with.

They first went on sale back in 2014, so if you managed to get hold of one and kept it, then you did really well as it’s now worth approximately $2,750! 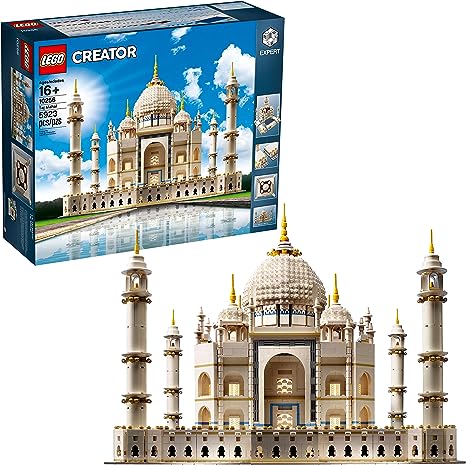 LEGO Creator Expert Taj Mahal 10256 Building Kit and Architecture Model, Perfect Set for Older Kids and Adults (5923 Pieces)
$700.15
Check Price On Amazon
We earn a commission if you click this link and make a purchase at no additional cost to you.

Get ready for the biggest lego set on the list. The Taj Mahal is absolutely massive, a real piece of art once it’s built.

It has over 5,900 individual pieces and is an absolute sight to be saluted.

If you have the time, money, and dedication to see it through to the end, I think you’ll be extremely happy with your purchase.

Taking the fifth spot on our list of the most expensive Star Wars lego sets – Han Solo On Tauntaun.

You might have thought it would have been something like The Millennium Falcon or The Star Destroyer, but it turns out this little lego set is a lot more sort after and valuable.

It’s certainly not the most eye-catching set or pretty to look at, but numbers are numbers and this is the most expensive Star Wars Lego Set to date.

Breaking the $4,000 mark, the 2012 edition of Piper Airplane would be a pretty cool lego set to own, and one I can see being worth the money.

As well as the airplane, you also get the airport and Minifigures, which is pretty cool.

However, keep reading as the top three might be worth getting instead of this one, purely for the kudos and cool factor.

Who’d of thought you’d be building food out of Lego? Well, you can and this entry proves it.

It might actually be the most expensive slice of pizza on the planet, but if you do purchase it, you’ll have the satisfaction of knowing that you’re one of the only people in the world to have one as it’s extremely rare.

It’s still crazy to think that a small slice of pizza could outrank Yoda, The Eiffel Tower, and Darth Maul! 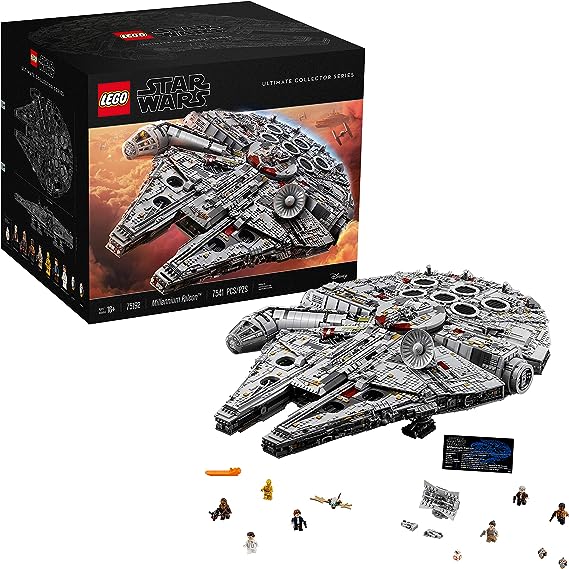 LEGO Star Wars Ultimate Millennium Falcon 75192 Expert Building Kit and Starship Model, Best Gift and Movie Collectible for Adults (7541 Pieces)
$849.99
Check Price On Amazon
We earn a commission if you click this link and make a purchase at no additional cost to you.

The title of the biggest Star Wars lego set on the planet goes to the Millennium Falcon.

It’s the second-largest Lego set in the world, just behind the Taj Mahal, and is made up of 5,174 pieces.

Overall, it sounds like a pretty good deal if you’re into your lego and you’re a big Star Wars fan… just think of all the hours of fun you could have with it!

Dominating the list is the 2015 edition of H.C. Andersen’s Clumsy Hans.

Originally, the sets were handed out to approximately 80 Lego ambassadors, most of whom decided to hold on to them, making them extremely hard to come by.

So, this is where its large price tag comes from. However, if you’re a collector and want that special something to top off your collection, then a mere $7,375 is nothing in comparison to bagging a rare lego set like this one.

We hope you enjoyed our list of the 20 most expensive Lego sets in the world.

That was some pretty darn cool lego, right? It seems to be such a good cross-generational toy and collector’s item.

If you’re looking to buy one of the most expensive lego sets in the world, then hopefully our list has given you a good reference point to begin your search!

Here’s a quick recap of the 20 most expensive Lego sets in the world:

What’s your favorite most expensive Lego set in the world? Leave a comment below.

The 10 Most Valuable Toys From Your Childhood