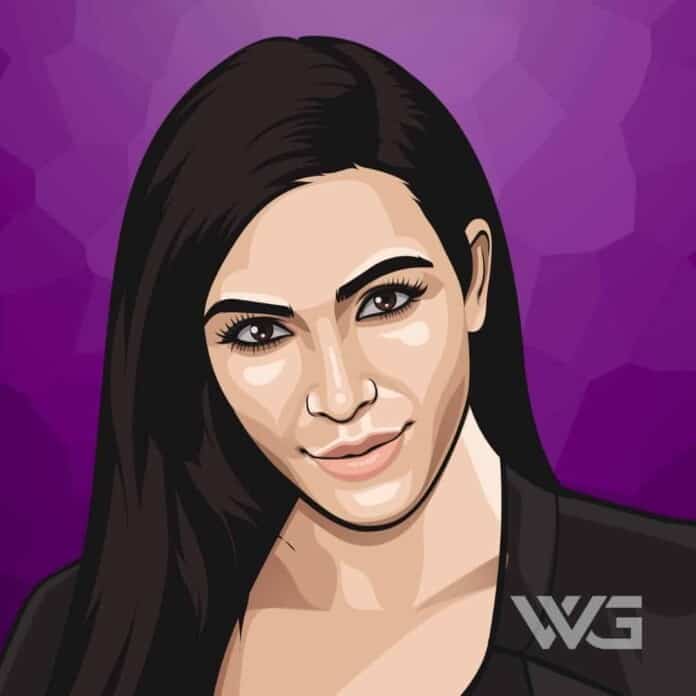 What is Kim Kardashian’s net worth?

As of December 2022, Kim Kardashian’s net worth is estimated to be $1.4 Billion, roughly earning $50 million every year. Kimberly Kardashian West is an American reality television personality, actress, businesswoman, and model, from Los Angeles, California.

Her beauty and body have led to numerous endorsements and modeling gigs, including for beauty products and clothing brands. She’s also a reality TV star with a bustling social media presence. On top of that, she has her own mobile game called Kim Kardashian: Hollywood, which has been downloaded 45 million times and generates almost 40% of her annual income.

The rest of Kim’s income is earned through her TV salary, endorsements, and any special appearances.

Kimberly Noel Kardashian West was born in Los Angeles, California on October 21, 1980. She is one of four children to parents Robert Kardashian and Kris Jenner.

She has an older sister Kourtney, a younger sister Khloe, and a younger brother Rob. She also has three stepbrothers (Burton “Burt”, Brandon, and Brody) and two stepsisters (Casey and Kendall Jenner).

Kim’s parents divorced in 1991, and her father passed away in 2003 from esophageal cancer. Her mother married former Olympian Bruce Jenner (now Caitlyn), who later transitioned into a woman.

Kim has said that her mother was very involved in her life growing up which made it difficult for her to make decisions on her own. As a result of this, she felt like she needed to be completely independent when she moved out of the house at 18 years old and went to college at Pierce College in California. After two years she dropped out to pursue modeling and acting.

Kim’s first marriage was to Damon Thomas, and they were married for four years before getting divorced in 2004. She then married basketball player Kris Humphries in 2011 but divorced after 72 days.

Kim started dating rapper Kanye West. In 2012 they had their first child, a girl named North West. They got married in 2014 and had two more children: a boy named Saint West and a girl named Chicago West.

In 2019 Kim and Kanye welcomed their fourth child through a surrogate, another baby boy named Psalm West.

Kim Kardashian first gained attention by appearing on episodes of “Keeping Up with the Kardashians” in 2007. The show followed her family members and helped establish the family’s reality television brand, which included spin-off shows such as “Kourtney & Khloé Take Miami,” “Kourtney & Kim Take New York,” and “Khloé & Lamar.”

She has also appeared in several films such as Disaster Movie (2008) and Deep in the Valley (2009), and in several television shows, including “Dancing with the Stars”, “How I Met Your Mother” and “Beyond the Break”.

By 2010, Kardashian was ready to branch out into other business ventures. She released a mobile game called “Kim Kardashian: Hollywood,” which was a virtual simulation game where players could work their way up in Hollywood by being an assistant to one of Kim’s friends and working hard to get roles and endorsements.

The game was wildly successful and generated millions for its creators. By 2015, it had been downloaded over 45 million times and was making about $700,000 per day for Glu Mobile Inc., its developer. Kim earns 28% of all revenue the game brings in, and so far it’s made over $160 million.

She also expanded her fashion line to include handbags, jewelry, shoes, and other products like tanning lotion, perfumes, and a workout DVD series.

Kardashian has also released a book, titled Kardashian Konfidential. The book details the early years of her life growing up in Los Angeles.

She has also released songs like “Jam (Turn It Up)”, which debuted and peaked at number one on Billboard’s Dance Club Songs chart in 2011.

Kim is also incredibly involved in politics and human rights. By having such a large platform, she has become a voice for those who are less heard and taken action when it was needed most. Her work ranges from spreading awareness about gun violence to helping release individuals from prison.

There have been many times when Kim Kardashian has used her influence for good and truly shown us that she is worthy of our admiration.

Here are some of the best highlights of Kim’s career:

“At the end of the day, life is about being happy being who you are, and I feel like we are so blessed to have the support system and the best family to really just support each other no matter what we’re going through.” – Kim Kardashian

“I don’t even drink! I can’t stand the taste of alcohol. Every New Year’s Eve I try one drink and every time it makes me feel sick. So I don’t touch booze – I’m always the designated driver.” – Kim Kardashian

“There are always going to be ridiculous rumors.” – Kim Kardashian

“It’s fun to have a partner who understands your life and lets you be you.” – Kim Kardashian

“Obviously, as you grow up, no one’s ever 100 percent proud of every decision that they’ve made, and that’s OK. I think as long as you learn from your mistakes and don’t make them over and over again, you’re on the right path.” – Kim Kardashian

10 Keys to Success from Kim Kardashian

Here are 10 success lessons we can all learn from Kim Kardashian, published originally on Thought Catalog:

1. Have a Unique Selling Point

5. Turn to the Media

6. Bring Up Your Team

How much is Kim Kardashian worth?

Kim Kardashian’s net worth is estimated to be $1.4 Billion.

How old is Kim Kardashian?

How tall is Kim Kardashian?

As a reality TV star, model, businesswoman, and socialite, Kim Kardashian is someone that is hard to ignore. She has spent over half of her life in the public eye, gaining a unique following of dedicated fans who have witnessed her transformation from an often misunderstood young woman to one of the most influential women today.

I guess as they say, you cannot judge a book by its cover, and indeed, there is more to Kim than meets the eye. From her days as Paris Hilton’s stylist to being featured on the cover of Vogue magazine, she has proven herself to be much more than just a pretty face.

Today, Kim Kardashian’s net worth is estimated to be $1.4 Billion, and this is sure to keep increasing.

What do you think about Kim Kardashian’s net worth? Leave a comment below.