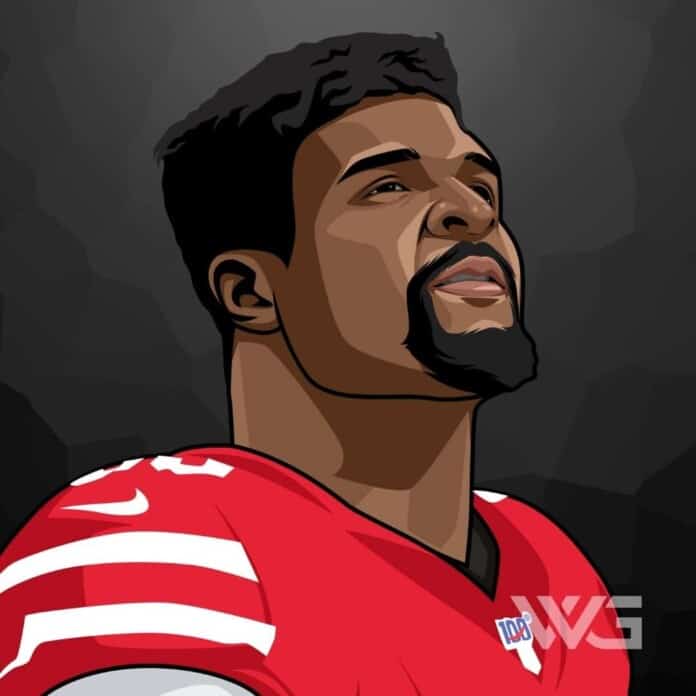 What is Dee Ford’s net worth?

Dee Ford is an American football defensive end for the San Francisco 49ers of the NFL.

Ford was drafted by the Kansas City Chiefs in the first round of the 2014 NFL Draft. He played college football at Auburn.

Dee Ford was born on the 19th of March, 1991, in Odenville, Alabama. While there, he played high school football.

As a senior, Ford recorded 90 tackles, including 38 tackles for loss and 18 sacks, intercepted a pass, and broke up three while being named to the Class 4A All-State team by the Alabama Sports Writers Association.

As a junior, he posted 87 total tackles with 16 tackles for a loss and 12 sacks.

In 2014, Ford attended the Reese’s Senior Bowl and had an impressive performance after recording two combined tackles, two tackles for a loss, a pass deflection, and sacked Virginia Tech’s Logan Thomas twice to help the South defeat the North 20-10.

He competed with Dezman Moses, Frank Zombo, and Josh Mauga throughout training camp for a job as the backup linebacker. Head coach Andy Reid named him the backup right outside linebacker to Tamba Hali to begin the regular season.

In 2017, the Kansas City Chiefs exercised the fifth-year option on Ford’s rookie contract that pays him $8.71 million in 2018.

Ford was set to begin his fourth season as the backup left outside linebacker to Tamba Hali until Hali was placed on the Physically Unable to Perform list with an unspecified injury and was set to miss the first six games.

On March 12, 2019, the Chiefs agreed to a trade that would send Ford to the San Francisco 49ers in exchange for a second-round pick in the 2020 NFL Draft.

Here are some of the best highlights of Dee Ford’s career:

I don’t think guys understand that it’s refreshing, it’s really refreshing. You get in a certain comfort zone when you play somewhere for a while. It’s human nature to get complacent, you kind of have to create new ways to get excited.” – Dee Ford

“I’m an adventurous guy, so I need the competition and I need the pressure. It’s refreshing, it’s like having to prove yourself all over again. Especially with the new contract, making some money, you need something to keep you grounded. I want that opportunity on an elite team in a city like San Francisco.” – Dee Ford

“I grew up in a music and sports household. Church taught me the craft of music and music theory. Once you explore the musician’s side, your brain goes to another level. Instinctively, I really contribute that to me being more instinctive on the field. I ran into many great coaches, and it’s important to have someone who can see who you can be before even you can even see it. That’s so important because I had that.” – Dee Ford

Now that you know all about Dee Ford’s net worth, and how he achieved success; let’s take a look at some of the lessons we can learn from him:

Work hard, stay positive, and get up early. It’s the best part of the day.

2. Find The Right Thing To Do

When you find the right thing to do, and people to work with, invest deeply into that, and stick with it for decades.

It does not matter where you are standing right now.

How much is Dee Ford worth?

Dee Ford’s net worth is estimated to be $81 Million.

How old is Dee Ford?

How tall is Dee Ford?

Dee Ford is a professional American football player for the San Francisco 49ers of the NFL. Ford was drafted by the Kansas City Chiefs in the first round of the 2014 NFL Draft.

He played college football at Auburn. He is a 2× SEC champion.

What do you think about Dee Ford’s net worth? Leave a comment below.