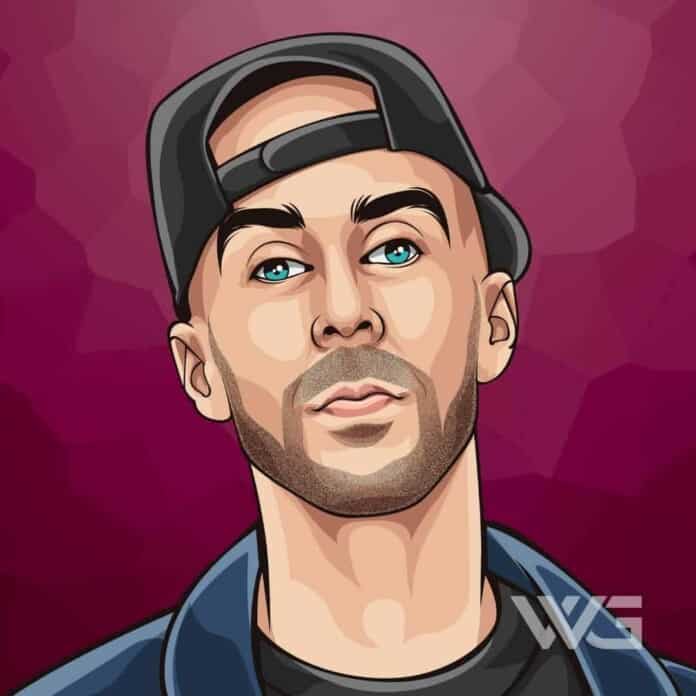 What is Travis Barker’s net worth?

As of September 2022, Travis Barker’s net worth is roughly $50 Million. Travis Landon Barker is an American musician, songwriter, and record producer from California. Barker is best known as the drummer for the rock band Blink-182.

He was a frequent collaborator with the now-late DJ AM, and together they formed TRV$DJAM. Due to his fame, Rolling Stone referred to him as “punk’s first superstar drummer” as well as one of the 100 Greatest Drummers of All Time.

Travis Landon Barker was born in Fontana, California, on November 14, 1975. Barker is the son of Randy and Gloria Barker. He got his hands on the drumsticks when he was only four years old. At the age of five, Barker began taking drum lessons with a skillful Michael Mai, who would expose a young drummer to experimenting with various playing styles. Travis also learned drumming skills from Thomas Hogan.

Additionally, Travis tried himself in trumpet lessons, playing the piano, and singing. All in all, he would always come back to drums.

It was while at school that he joined the marching band and thus was exposed to regional competitions and festivals. In his last year at school, he toured with his first band, Feeble.

After graduating high school, Barker worked as a trash man until he found a temporary place in the punk group, The Aquabats, with whom, in 1997, he recorded his first album.

Barker earned his first breakthrough in 1998 when he was recruited to fill in on the drums for the punk rock group, Blink-182. His skills at playing the drums surfaced when he not only learned the drum tracks for 20 songs in 45 minutes but played the same with complete perfection and poise.

Besides his involvement with Blink-182, he recorded tracks for Transplants, a rap/rock band. He also contributed to Dave Carlock’s band, The Distillers, and appeared in one of the videos of Puff Daddy, ‘Bad Boy for Life.’

In 2003, Blink-182 began to work on their next album. Interestingly, they let forgo the conventional recording process and instead turned a home into a studio. After months of working out, they released their fifth self-titled album, ‘Blink-182’.

The tracks from the album, ‘Feeling This’ and ‘I Miss You’ peaked high on the Billboard. In 2005, the band finally broke up calling for an ‘indefinite hiatus’.

Furthermore, musical aspirations apart, he has a clothing and accessory company, ‘Famous Stars and Straps,’ his own record label, ‘LaSalle Records,’ and a restaurant in California, ‘Wahoo’s Fish Taco.’

Travis Barker has a long list of diverse relationships. Melissa Kennedy became his first fiancée in 2001. The marriage wasn’t that successful, and in August 2002, the couple divorced.

His second marriage to a famous actress and Miss USA 1995 title holder Shanna Moakler brought a young drummer two children: a son and a daughter. Unfortunately, after two years, on August 8, 2006, the couple announced a divorce.

Actually, the story of those two wasn’t over. Till 2009, Travis and Shanna tried to rekindle their relationship. All in all, it wasn’t successful.

The drummer also was spotted in a brief romance with a talented singer and actress, Rita Ora.

In January 2021, long-lasting rumors turned into reality, and Travis Barker and Kourtney Kardashian officially confirmed that they were in a relationship. In October 2021, the couple got engaged and officially married on May 15, 2022. Before their courthouse ceremony, Travis and Kourtney were unofficially married in Las Vegas by an Elvis impersonator. “Once upon a time in a land far, far away (Las Vegas) at 2am, after an epic night and a little tequila, a queen and her handsome king ventured out to the only open chapel with an Elvis and got married (with no license). Practice makes perfect,” Kourtney later wrote on Instagram, sharing a bunch of romantic pictures of the two of them.

Apart from Blink-182, Travis Barker has also done plenty of incredibly prolific collaborations with other music projects. Among them are such popular bands as The Aquabats, The Transplants, +44, TRV$DJAM, and Box Car Racer.

In 2011, Travis dropped his debut solo album, Give the Drummer Some, which included features from famous stars like Rick Ross, Lil Wayne, and Swizz Beatz.

It’s fair to say he’s earned quite a bit from his collaborative efforts. Recently, Travis has been working hard on a duo with superstar Machine Gun Kelly and playing drums for TikTok young stars Jxden and Lil Huddy.

Additionally to his musical interests, Travis is the owner of several businesses. In 1999 he established an accessory and clothing line called Famous Stars, which sells jackets, tee-shirts, hats, and other street/skate style accessories.

Moreover, together with well-known skateboarder Rob Dyrdek, Travis is a part of the Rogue Status clothing label, and since 2009 one more label called DTA.

Apart from this, Barker designed a shoe for DC Shoe Company, “Alias Remix.” He also owns a line of drumming products, such as sticks with his signature. This is sponsored by Zildjian.

Here are some of the best highlights of Travis Barker’s  career:

“I juice a lot; I get as much protein as I can, because being a vegan, there isn’t much protein. But that’s pretty much it. I just drink lots of water, too. I’ll have a protein shake as well every morning.” – Travis Barker

“I try to do an hour of cardio on the days that I have off, and then I’ll do 30 to 45 minutes on show days. That’s the first thing I do when I wake up, I have breakfast and then I’ll hit the gym.” – Travis Barker

“Usually, if I’m coming to Europe, I’m on a boat for seven days, so I spend the seven days doing a bunch of things. I’ll do cardio for an hour or an hour-and-a-half and weights, just lightweights.” – Travis Barker

“I think to put your relationship out there for people to interpret and have their own opinion about, I think it’s crazy.” – Travis Barker

“The whole time after you record an album, you’re just waiting for the release date. You’re waiting for fans to hear it and stuff.” – Travis Barker

3 Lessons from Travis Barker About Parenting

Let’s take a look at some of the lessons we can learn from him about parenting:

Finding the time to exercise when you’re a parent isn’t always easy. There is always something to do but you know that it’s important to work out and take care of yourself, so you make the time.

2. Live Close To Your Kids

When a couple splits up and starts co-parenting, one parent typically stays in the family home and the other one must find a new residence. In the best-case scenario, that parent will find a place to live that is close by. That’s exactly what Travis did.

Every parent jokes about their kids becoming teenagers and everything that will entail. It can be stressful for moms and dads to imagine their kids dating. Many parents want time to slow down and think that this is happening all too fast.

How much is Travis Barker worth?

Travis Barker’s net worth is estimated to be $50 Million.

How old is Travis Barker?

How tall is Travis Barker?

Not everyone with the drumsticks in their hands can boast of playing the instrument like Travis Barker!

Recognized as ‘Punk’s first superstar drummer’ by Rolling Stone magazine, he is the immaculate drumming star of the era, who reaffirmed the status of the music of the drums. Today, he is considered to be one of the best drummers in music history.

As of September 2022, Travis Barker’s net worth is approximately $50 Million.

What do you think about Travis Barker’s net worth? Leave a comment below.