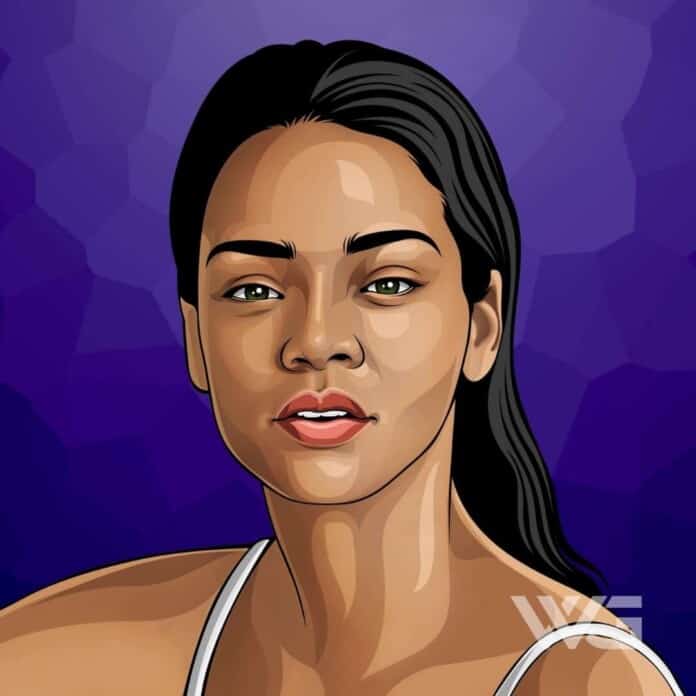 What is Rihanna’s net worth?

As of February 2023, Rihanna’s net worth is estimated to be $1.7 Billion, making her America’s youngest self-made millionaire woman, the wealthiest female musician, and one of the richest singers in the world.

Rihanna is a Barbadian singer, songwriter, and actress.

She is one of the best-selling music artists of all time who has won multiple awards over the years, including the GAFFA Awards, BRIT Awards, Bravo Otto Awards, Billboard Music Awards, Grammy awards, etc. Many of her studio albums went platinum.

Robyn Rihanna Fenty, well-known as Rihanna, was born on the 20th of February 1988, in Saint Michael, Barbados, in the family of a retired accountant Monica and a warehouse supervisor Ronald Fenty. Rihanna has five siblings: two brothers, two half-sisters, and a half-brother.

Her childhood was pretty traumatic. The family fought with her father’s crack, cocaine, and alcohol addiction. Rihanna had numerous doctor’s appointments and CT scans for the splitting headaches she was experiencing at the time.

These turned out to be the effects of constant stress and traumas. Once her parents divorced, her health started to improve.

Rihanna began singing at the young age of just seven years old. She didn’t graduate high school and instead focused all of her efforts on a music career.

In 2003, Rihanna formed a musical trio with two fellow classmates. An American record producer quickly discovered her in Barbados and invited Rihanna to his home in the States to record some demo tracks.

Within the same year, Rihanna was signed to Syndicated Rhythm Productions. Jay-Z heard some of the initial tracks that were sent to recording labels, and as the CEO of Def Jam Records, he was desperate to sign Rihanna to the label.

In fact, Rihanna came in one day for a meeting, and the team at Def Jam made sure she didn’t leave the building before they managed to get a signed contract from her.

Signing with Def Jam paved the way to Rihanna’s success you see today; including dozens of awards and multiple platinum-awarded albums. In the past couple of years, she’s also begun to diversify into the area of acting, and has played roles in several films.

As of February 2023, Rihanna’s net worth is estimated to be $1.7 Billion, making her one of the richest singers in the world.

September 2017 was the year of “the new generation of beauty.” Together with LVMH, Rihanna launched a mind-blowing makeup line called Fenty Beauty, presenting 40 beautiful shades of foundation for each skin tone: from the lightest to the darkest.

It was an unprecedented revolution in the beauty sphere. Rihanna managed to meet the needs of darker-skinned women, who had been historically underserved by the beauty industry. Fenty Beauty line serves everyone: women from all over the world can’t stop buying her products.

Launched in 17 countries and 1,620 stores at once, Fenty Beauty has helped Rihanna enter one of the world’s most exclusive ranks: billionaire.

Today the brand is worth $1 billion. Rihanna owns 30% of it.

Here are some of the best highlights of Rihanna’s career:

“I want to give people a taste of the Caribbean, and show them the fun side of me.” – Rihanna

“I am a child but I have to think and act like a woman, this business forces you to.” – Rihanna

“Dancing was always part of my culture growing up in Barbados. When I shot my 1st video I worked really hard with my choreographer to perfect the routines.” – Rihanna

“People think, because we’re young, we aren’t complex, but that’s not true. We deal with life and love and broken hearts in the same way a woman a few years older might.” – Rihanna

View our larger collection of the best Rihanna quotes!

How much is Rihanna worth?

Rihanna’s net worth is estimated to be $1.7 Billion.

How old is Rihanna?

How tall is Rihanna?

Rihanna is one of the most successful singers in the world, and continues to diversify her career.

As of February 2023, Rihanna’s net worth is estimated to be $1.7 Billion, making her one of the richest singers of all time.

What do you think about Rihanna’s net worth? Leave a comment below.