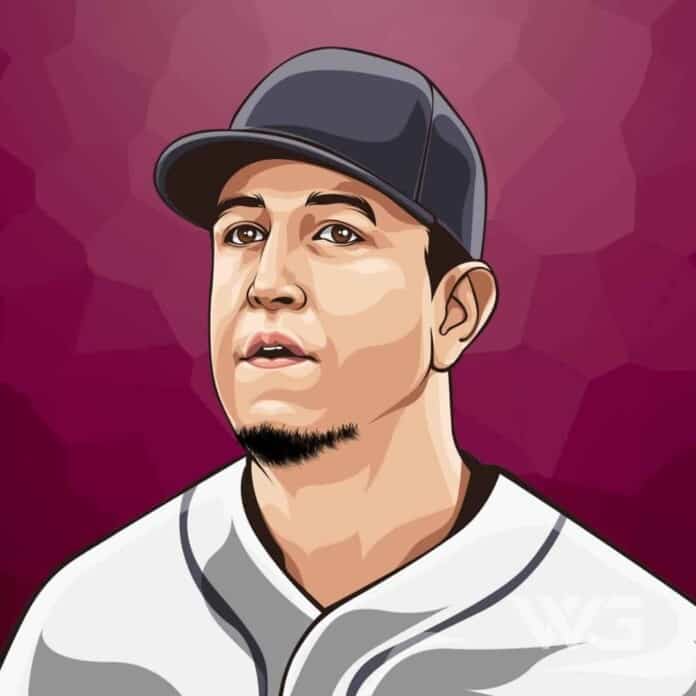 What is Miguel Cabrera’s net worth?

He is the first baseman for the Detroit Tigers of Major League Baseball. Since his debut in 2003, he has been a two-time American League Most Valuable Player.

Jose Miguel Cabrera Torres was born on the 18th of April, 1983, in Maracay, Venezuela. He is the son to Miguel and Gregoria Cabrera. His father was a welder and his mother represented Venezuela in softball. He has a sister named Carla Ruth.

His parents, who are now divorced, put immense pressure on him to succeed as a baseball player.

At the age of 14, Miguel Cabrera was picked by the ‘Tigres de Aragua’, one of the eight teams that compete in the Venezuelan winter league. He made his first hit in December 1999 and played for the team till his retirement from Caribbean baseball in January 2008.

Cabrera spent his early years at the Marlins toiling through their farm system. He began as a shortstop in the ‘Gulf Coast League’ (GCL) in 2000.

In 2007 he became the third-youngest player to accumulate 500 RBI as a major leaguer. After signing the eight-year, $152.3 million contracts with the ‘Detroit Tigers’ he took the field for his debut outing against the ‘Kansas City Royals’.

Cabrera returned to the first base in 2014, his contract with the Tigers was extended for eight more years on top of the remaining two from the initial writings. The entire deal is worth $292 million.

He achieved the distinction of hitting a home run against all the 30 major league teams when he hit one against his former team ‘Miami Marlins’ in 2016.

Here are some of the best highlights of Miguel Cabrera’s career:

“Days off always help. Even if people don’t like it when they give you a day off, you’ve got to take a day off because sometimes you’ve got to clear your mind.” – Miguel Cabrera

“I feel good about that. I don’t want to leave this team. I’ve never thought that next year I’m going to arbitration and I’m going to make a lot of money. I just have to keep playing baseball the way I have to play.” – Miguel Cabrera

Now that you know all about Miguel Cabrera’s net worth, and how he achieved success; let’s take a look at some of the lessons we can learn from him:

Without action, your dreams will stay dreams. Without a plan, your actions can be unfocused and wasted. However, without a dream, you won’t have anything to act upon.

If you want to increase your chances of achieving your dreams, you must first believe that doing so is within your reach. How? You can do this by breaking your dreams down into small steps.

Telling your mind to be quiet as it comes up with great-sounding excuses to procrastinate can be difficult but the more you can get yourself to take action anyway, the stronger your ability to follow through will become.

How much is Miguel Cabrera worth?

Miguel Cabrera’s net worth is estimated to be $125 Million.

How old is Miguel Cabrera?

How tall is Miguel Cabrera?

Miguel Cabrera is considered to be one of the best pure hitters of all time with two ‘American League Most Valuable Player’ awards, 458 career home runs, 2,595 hits, 1,598 RBI, and .319 batting average, he is a rare batter who combines analytical skills with raw power and has the ability to hit the ball to all fields.

What do you think about Miguel Cabrera’s net worth? Leave a comment below.