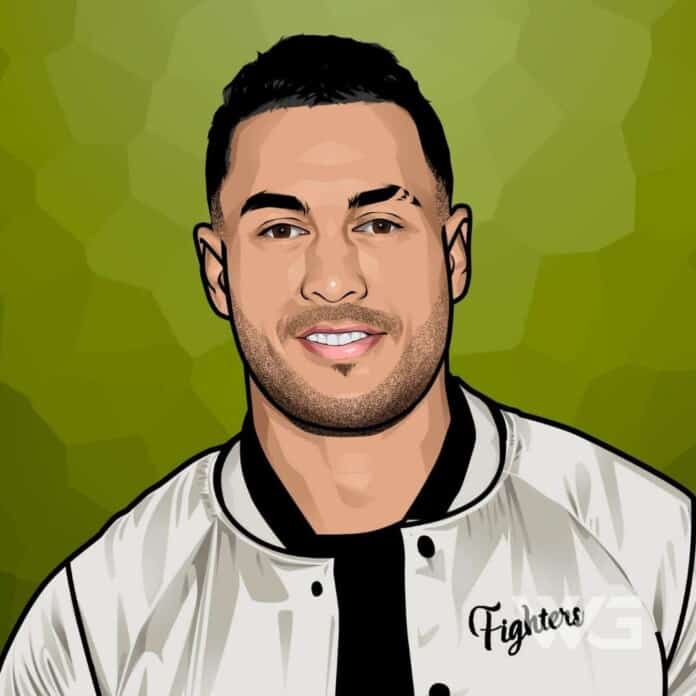 What is Giancarlo Stanton’s net worth?

Giancarlo Stanton is an American outfielder and designated hitter for the New York Yankees of MLB.

Stanton made his major league debut in 2010 as a member of the Miami Marlins, with whom he played until the end of the 2017 season. Stanton has twice led the National League in home runs; he hit 59 home runs in 2017, the most in 16 years.

As of December 2022, Giancarlo Stanton’s net worth is estimated to be roughly $40 Million.

Giancarlo Cruz Michael Stanton was born on the 8th of November, 1989, in Los Angeles.

Stanton is mostly of African American and Irish descent. Growing up, he was a huge fan of the Los Angeles Dodgers.

In the ‘2007 Amateur Draft,’ Stanton was selected by the ‘Miami Marlins’ in the second round, 76th overall pick. He began playing rookie-level minor league affiliate of ‘Marlins,’ ‘The Gulf Coast League Marlins.’

During the 2010 season, Stanton’s home run against ‘Montgomery Biscuits’ on May 6 went over the scoreboard and reached over 500 feet from home plate. In June 2010, he was called for the ‘Florida Marlin’s major league. He was the third-youngest player (20years and 212 days) to make his major league debut with the Marlins.

His rookie season record was an average distance of 399.6 feet for home runs at an average speed of 104.3 MPH. Stanton got selected as an outfielder for Baseball America’s ‘2010 All-Rookie Team’ and ‘2010 Topps Major League Rookie All-Star Team.’

In 2014, the Marlins signed him to the richest total dollar value contract in team sports history at the time of the signing; the contract is worth $325 million over 13 years. During the 2017 season, Stanton was traded to the New York Yankees.

A few years later, the New York Yankees acquired Stanton and cash considerations from the Marlins for Starlin Castro and minor leaguers Jorge Guzmán and José Devers. He is the second player in major league history to be traded after a 50-homer season.

As of December 2022, Giancarlo Stanton’s net worth is estimated to be roughly $40 Million.

How Does Giancarlo Stanton Spend His Money?

Giancarlo Stanton spends some money on his real estate in Miami.

Stanton owns an incredible home in Miami. The apartment will be located in a 53-story luxury condominium with panoramic views of Biscayne Bay, Miami Beach.

Here are the best highlights of Giancarlo Stanton’s career:

“Why would you give me so much money and not try to win? What on earth is the point of that? They have to be serious about winning going forward. There’s no other logical explanation.” – Giancarlo Stanton

“I thought it’d be different. Kind of like, a lot of weight lifted off of my shoulders, as I don’t have to worry about finances for the rest of my life or my family’s. But it wasn’t like that. It was more – there are things I need to get done.” – Giancarlo Stanton

“There’s not much you can complain about – you’re a Major League Baseball player; you’re getting paid to play a game. People want to be you, wish they could do what you do. There are some complaints here and there, but there really aren’t any significant ones.” – Giancarlo Stanton

“It hasn’t been fun. He knows people inside baseball and out question his durability, just as he knows the only way to dump that label is to play. “You got to be out there on the field if you don’t want questions.” – Giancarlo Stanton

Now that you know all about Giancarlo Stanton’s net worth and how he achieved success; let’s take a look at some of the best lessons we can learn from him:

Inspiration usually comes during work rather than before it.

The day you plant the seed is not the day you eat the fruit.

It will never work out if you live in the past or the future. Be present.

How much is Giancarlo Stanton worth?

Giancarlo Stanton’s net worth is estimated to be $40 Million.

How old is Giancarlo Stanton?

Giancarlo Stanton was born on November 8, 1989, and is currently 33 years old.

How tall is Giancarlo Stanton?

Giancarlo Stanton is an American professional baseball player who made his major league debut for the Marlins in June 2010 and has played for Miami his entire career.

He is a two-time MLB All-Star in 2012 and 2014. Stanton is a four-time MLB All-Star. He has twice won both the NL Hank Aaron and outfield Silver Slugger Award after leading the league in home runs.

As of December 2022, Giancarlo Stanton’s net worth is approximately $40 Million.

What do you think about Giancarlo Stanton’s net worth? Leave a comment below.