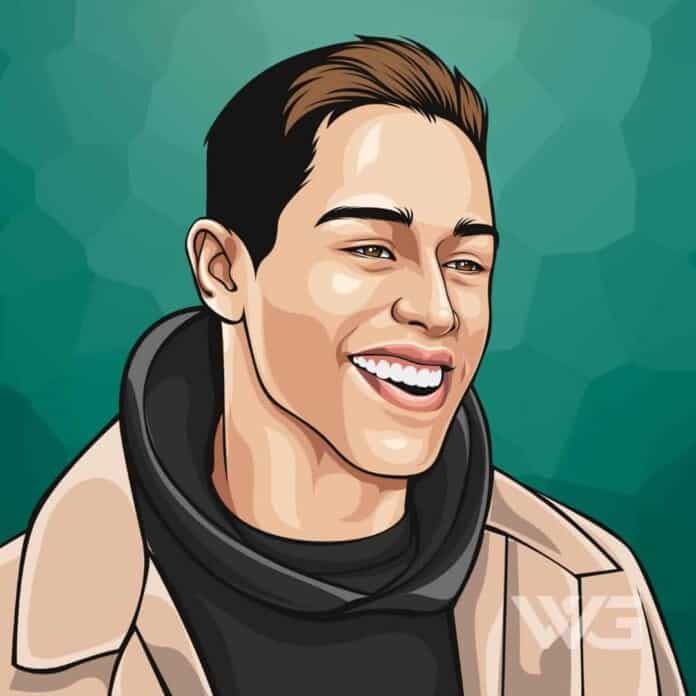 What is Pete Davidson’s net worth?

As of January 2023, Peter Davidson’s net worth is estimated to be roughly $8 Million.

Pete Michael Davidson is an American comedian and actor from New York. Davidson is one of the highest-paid cast members on Saturday Night Live. He has also appeared on the MTV shows Guy Code, Wild ‘n Out, and Philosophy.

Davidson is the son of Amy and Scott Matthew Davidson. His father was of mostly Jewish heritage, and his mother is of Irish ancestry; Davidson was raised Catholic.

His father, Scott Davidson, was an NYC firefighter who died in service during the September 11 attacks; he was last seen running up the stairs of the Marriott World Trade Center just before it collapsed.

When asked about his childhood, Davidson said that it was “not great.” He claimed that his family “didn’t handle (his father’s passing) well.” However, he also admitted that if his “childhood was fine, I’d probably be a construction worker in Staten Island and be the happiest guy ever. But the weird s–t that it does to you made me love comedy.”

It is safe to say that Pete didn’t have the easiest childhood, but he managed to successfully transform that pain into hilarious performances on stage and a multitude of great comedy specials.

He joined the cast of Saturday Night Live with that show’s 40th-season premiere, which debuted on in 2014. At age 20, he was the first SNL cast member to be born in the 1990s, and one of the youngest cast members ever.

In January 2019, it was announced that Davidson would be touring with John Mulaney in New York, New Jersey, Pennsylvania and Massachusetts for a limited series of comedy shows titled, “Sundays with Pete & John.”

Mulaney and Davidson have become close appearing together on The Tonight Show with Jimmy Fallon and Saturday Night Live.

Pete’s personal life has been rather tumultuous up until now. He has shown a proclivity for dating famous women. His relationships tend to end quite early but also move forward at a frightening. The stand-up comedian was in a relationship with Ariana Grande for barely five months, and yet they managed to get engaged soon after their first date. After their breakup, Grande even recorded a song titled “Pete Davidson”.

In 2021, he started dating Kim Kardashian, who was fresh from her divorce from Kanye West. The relationship was shrouded with an aura of controversy, primarily due to Kanye’s harassment of Pete on social media, caused by some questionable decisions on the comedian’s side, including tattooing Kim’s and her children’s names on his own body. The Kardashian-Davidson relationship didn’t last too long, and the pair broke up after about nine months together.

Here are some of the best highlights of Pete Davidson’s career:

“I’m not making fun of it because I want to make fun of it. I’m making fun of it so I feel better. I don’t want people to think any time there’s a tragedy that I’m going to make a joke about it. It’s only funny to me because it’s personal to me. And that was always the goal. It wasn’t to be this insult person.” – Pete Davidson

“I don’t want idiots in my audience. So if me coming forward with what my beliefs are is what you need to hear to not be a fan anymore, that’s great. That means next time I show up in whatever said city, your dumb ass won’t be there.” – Pete Davidson

“My jokes have definitely changed. ‘SNL’ has helped with that, because when you’re on ‘SNL,’ you have to kind of pay attention to the news. I feel like my material has gotten smarter now.” – Pete Davidson

“I don’t let a lot of people know about my dad dying on 9/11. It’s not a way to introduce yourself. So I never told anybody, and then I would do jokes about it… and I think people thought I was lying about it. Which would be crazy!” – Pete Davidson

“I bombed so much as a standup that messing up doesn’t matter to me anymore. I kind of enjoy bombing sometimes – I try and make everybody hate me more. Like, once I know it’s not going well, I can just have fun.” – Pete Davidson

View our larger collection of the best Pete Davidson quotes!

Now that you know all about Pete Davidson’s net worth, and how he achieved success; let’s take a look at some of the lessons we can learn from him:

Learning does not stop after you graduate from school. Never stop being interested to learn something new or to further enhance a skill you already have. Pete Davidson’s comedy career is the best proof of that. Starting out with shows like Gotham Comedy Live and multiple Comedy Central roasts, he could have remained in his comfort zone after landing the cushy Saturday Night Live job. Instead, he branched out and has co-written and acted in plenty of movies, which made him all the more successful.

Approaching each experience with a sense of interest and wonder can sustain your success. Pete’s fascination with different art forms, whether it’s movies, stand-up comedy, or writing, makes him a truly versatile artist and a major part of the reason why he is so successful.

Nor can it be found in expensive possessions or the achievements you’ve had. You must have the wisdom to discern the difference between fleeting happiness and true joy. As evidenced by Pete’s tumultuous relationship history and personal life, you can be a millionaire and still struggle in life.

How much is Pete Davidson worth?

Pete Davidson’s net worth is estimated to be $8 Million. He amassed it mainly thanks to his comedy work, starting out at the Gotham Comedy Club in New York City, and later thanks to his performances on Saturday Night Live and other endeavors, including movies and TV shows.

How old is Pete Davidson?

How tall is Pete Davidson?

Pete Davidson is an American comedian and actor. He is best recognized as one of the main cast members of the comedy show ‘Saturday Night Live’.

He has also appeared in a number of other TV shows and movies. As a comedian, he has performed stand-up comedy on Jimmy Kimmel Live, Adam Devine’s House Party, and Comedy Underground with Dave Attell.

As of January 2023, Pete Davidson’s net worth is approximately $8 Million.

What do you think about Pete Davidson’s net worth? Leave a comment below.