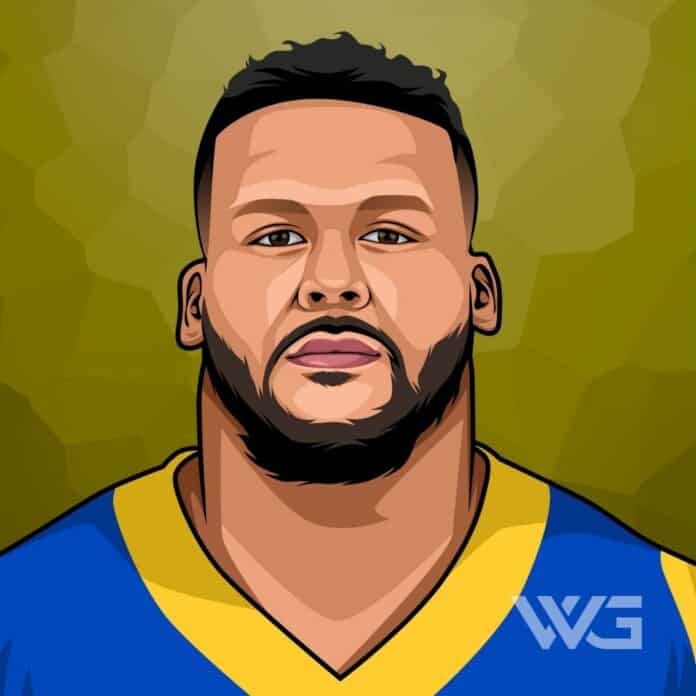 What is Aaron Donald’s net worth?

Aaron Donald is an American football defensive tackle for the Los Angeles Rams of the NFL. Donald played college football at Pittsburgh, where he was recognised as an unanimous All-American.

He was drafted by the Rams with the thirteenth pick in the first round of the 2014 NFL Draft.

As of December 2022, Aaron Donald’s net worth is approximately $60 Million.

Aaron Charles Donald was born on the 23rd of May, 1991, in Pennsylvania.

He has two more siblings and was raised by his parents, His Father, Archie who was formerly a football player in college, had the dream of being drafted into the NFL but had to retire due to injuries sustained.

A fractured patella ended his dreams.

Donald made his first NFL debut on the 7th of September 2014 against the Minnesota Vikings. The game finished with a loss but he made four tackles. Other games soon followed, and he displayed his skills.

After the 2014 season, he was named the NFL All-Rookie Team; he won the Rookie defensive player of the year award. Donald became the Rams defensive starter in the 2015 season, and His first game was against the Seattle Seahawks.

He was fined severally for unlawful conduct and unsportsmanlike behavior in his 2016 season. Notwithstanding, Donald was still awarded The NCC Defensive player of the week twice.

Donald made his first Superbowl appearance in 2018 in the Superbowl LIII with his team but lost to the New England Patriots 13-3.

The Rams renewed his contract for a 6-year, $139 million extensions with $89 million guaranteed, making him the second-highest-paid defensive tackle player in the History of the NFL after Khalil Mack.

Here are some of the best highlights of Aaron Donald’s career:

“It was a dream come true to play for the University of Pittsburgh. My experience as a Panther is something that influences my life every day and I want to pay that forward.” – Aaron Donald

“I’m just going out there and doing my job, so whatever it is – if it’s hard to slide protection if it’s a double team, or even a triple team or a chip – whatever it is, I’m just finding ways to win, so that’s about it.” – Aaron Donald

“I don’t care if it was 2 o’clock in the morning after a night game. I had to break down the film by myself before I watched it with the team. Seeing everything I did wrong and did right or I wouldn’t be able to sleep.” – Aaron Donald

“You have to watch out because being an athlete and playing at the college level with the opportunity to go the NFL, you’re under the microscope and everybody’s watching. There are people that look up to us. So you have to watch out for what you do and who you’re around.” – Aaron Donald

Now that you know all about Aaron Donald’s net worth, and how he achieved success; let’s take a look at some of the lessons we can learn from him:

You’ve got to try to find ways to dominate in any way – it ain’t about getting sacks, it’s about making the big plays.

If that’s pressing the quarterback, making them throw a pick – whatever you’ve got to do to try to dominate the game.

But you know it’s going to come. You gotta keep playing, playing hard, continue to study, continue to get myself better, working on my technique, and it will come.

3. Your Hard Work Will Be Rewarded

Anytime you’re rewarded for the success you have, you’re going to be happy because you put the body of work in. Lots of hard work. A lot of training.

A lot of things you do behind the scenes.

How much is Aaron Donald worth?

Aaron Donald’s net worth is estimated to be $60 Million.

How old is Aaron Donald?

How tall is Aaron Donald?

In 2013 he was first-team All-ACC and an unanimous All-American and won the ACC Defensive Player of the Year, the Bronko Nagurski Trophy, the Chuck Bednarik Award, the Lombardi Trophy, and the Outland Trophy.

What do you think about Aaron Donald’s net worth? Leave a comment below.