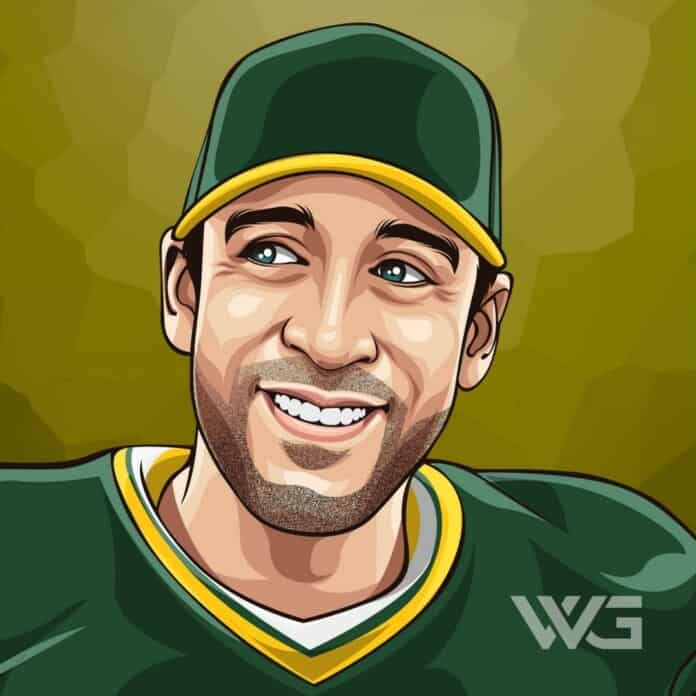 What is Aaron Rodgers’ net worth?

As of December 2022, Aaron Rodgers’ net worth is estimated to be roughly $200 Million.

He initially gained recognition when he received an athletic scholarship in 2003, where he started to play for the California Golden Bears football team.

He is currently playing for the Green Bay Packers.

Aaron Rodgers was born in Chico, California on the 2nd of December, 1983. He grew up with his parents and two brothers in Ukiah, California.

His father Edward played football for the Chico State Wildcats. Aaron’s ancestry is German, Irish and English. When he was 10 years old he was featured on the Ukiah Daily Journal.

The Rodgers family relocated to Chico in 1997 and he attended Pleasant Valley High School, where he started his career as a quarterback.

During Rodgers college years he led the school to a No 2 ranking and a 10-1 record. His success caught the eyes of the talents scouts, and the following season he enrolled to be the college team starter.

Rodgers started his NFL career by coming to the team Green Bay, where he started as a quarterback. He endeared himself to Green Bay fans and press. Rodgers proved that he was one of the elite quarterbacks when he helped his team to win over the Packers in Super Bowl XLV.

He earned MVP honors completing 24 of 39 passes for 304 yards and three touchdowns. He maintained his position among football’s top performances in their successive seasons.

Rodgers missed seven games of 2013 with a fractured collarbone but he came back later on to the regular season where he leads the game against Bears to a victory. The following year he led his team to a playoff.

When Rodgers did his 100th game he reached the first rank in NFL history. He is among all quarterbacks having the best touchdown passes, yards and a passing rating of all time in NFL history.

In April Rodgers was announced as a limited partner in the Milwaukee Bucks, making him the first active NFL player with an ownership in an NBA franchise.

What is Aaron Rodgers’ net worth?

As of December 2022, Aaron Rodgers’ net worth is $200 Million, and he is now one of the best quarterbacks in NFL, alongside the likes of Tom Brady.

Here are some of the best highlights of Aaron Rodgers career:

“Performing at my best is important to me and should be to everyone. I am blessed that my dad is a chiropractor. Getting adjusted regularly – along with practicing other good health habits that my mom helped me to establish – are all part of my goal to win in life and on the field.” – Aaron Rodgers

“I try to be as courteous as possible and sometimes try to tell my fans that as much as I appreciate their support, there are times where I need to be able to have an uninterrupted dinner or not have to take a bunch of pictures or just be able to do some of the normal things.” – Aaron Rodgers

“The thing you realize as you get older and you play, that you don’t really understand when you’re a backup the first few off-seasons, how important that mental rest is. It’s a grind physically during the season, dealing with the hits and the physical pain that goes with playing in this game. But mentally it’s probably more taxing, so you need that ability to find that escape.” – Aaron Rodgers

“Playing behind a first-ballot Hall of Fame-r, who also is the all-time record holder for consecutive starts by a quarterback, it’s a different mindset. You just have to challenge yourself in ways that you never challenged yourself before.” – Aaron Rogers

“The guys who stick around are the smartest guys and the guys who are the most self-driven. You have to have drive. The coaches can only take you so far. You have to want to learn and work.” – Aaron Rogers

How much is Aaron Rodgers worth?

Aaron Rodgers’ net worth is estimated to be $200 Million.

How old is Aaron Rodgers?

How tall is Aaron Rodgers?

Aaron Rodgers is one of the best quarterbacks of all time. He was selected in the first round of NFL draft by the team Packers. Rodgers has shown that no matter how great you are, you are never too good to improve and impress people.

He is using his skills to help other people, his unique play skill has impressed the world, and that is one reason why he has gained an incredible net worth.

What do you think about Aaron Rodgers’ net worth? Leave a comment below.

What is Mike Jones' net worth?  Introduction  Mike Jones is an...