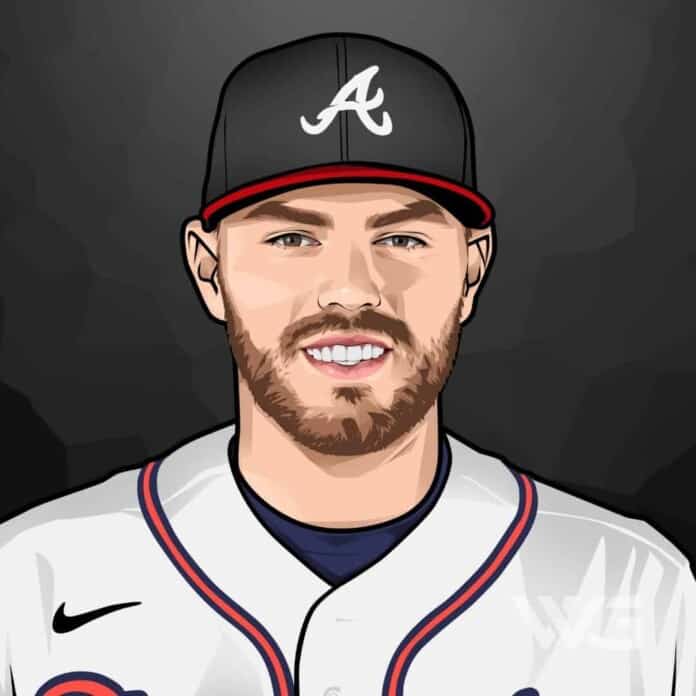 What is Freddie Freeman’s net worth?

He is the first baseman for the Atlanta Braves of MLB. Freeman has been with the Braves organization since he was drafted by them out of high school in 2007. He made his MLB debut in 2010 and is a four-time MLB All-Star.

Frederick Charles Freeman was born on the 12th of September, 1989, in California.

His mother was from Peterborough, while his father is from Windsor. Because Freeman’s parents were both born in Canada, Freeman himself holds Canadian citizenship in addition to American citizenship.

The Atlanta Braves selected Freeman in the second round, with the 78th overall selection, of the 2007 Major League Baseball draft. Freeman signed with the team for $409,500, foregoing his college scholarship.

Freeman was called up to the Braves on September 1, 2010, as part of the team’s September call-ups and made his major league debut that same day.

He began the 2011 season as the starting first baseman for the Braves. After a slow start, his performance improved, and he had been mentioned as a strong candidate for rookie of the year.

In 2013, Freeman was selected as a finalist for the 2013 Major League Baseball All-Star Game Final Vote. He won with a record-setting total of 19.7 million fan votes but could not play because of a thumb injury suffered three days before the game.

Freeman drew attention to his offensive production throughout the first half of the 2019 season, especially in June. Freeman has selected the National League starter at first base in the 2019 Major League Baseball All-Star Game at midseason.

How Does Freddie Freeman Spend His Money?

Freeman spends some of his money on his real estate in Georgia.

Here are the best highlights of Freddie Freeman’s career:

“In the past, my success has come with sticking to one plan. That usually works. Obviously, it’s going to falter, and I’m going to go into slumps here and there, but stick with the plan, and hopefully, it will come out successful more times than not.” – Freddie Freeman

“They said if I could deal with the pain, I should play. So, I did, and for some reason, I started hitting. It was a weird thing. I don’t know if it was because I couldn’t do too much, and I was trying to stay up through the middle and not hurt myself.” – Freddie Freeman

“You’ve just got to keep grinding, putting good ABs together; stop trying to look at the record, your batting average. You’ve got to go out there and keep playing.” – Freddie Freeman

“It’s something I’d never wish anybody to have to go through, having a mother passed away at a young age. But it’s made me realize that people need help.” – Freddie Freeman

“But I feel like I’ve hit the ball well all year, so it’s been more of a frustrating-for-the-results kind of year. I feel like the prep and everything I do in the game and hitting the ball hard. There’s nothing different. It’s just the results … Obviously, I’ve gotten the results over the last month or so, so that’s definitely helped.” – Freddie Freeman

“We are as close as all the other (recent Braves) teams, if not closer. We really are. We’ve got so many (leaders and contributors). You’ve got Josh Tomlin and Will Smith in the bullpen — they’ve got that locked down. You’ve got Charlie Morton and Max Fried, you’ve got Ian Anderson – they’re all locked in.” – Freddie Freeman

Now that you know all about Freddie Freeman’s net worth and how he achieved success; let’s take a look at some of the lessons we can learn from him:

Don’t limit yourself. Many people limit themselves to what they think they can do. You can go as far as your mind lets you.

Ability is what you’re capable of doing. Motivation determines what you do. Attitude determines how well you do it.

Work hard every day because every day is a great day.

How much is Freddie Freeman worth?

Freddie Freeman’s net worth is estimated to be $40 Million.

How old is Freddie Freeman?

How tall is Freddie Freeman?

Freeman signed with the team for $409,500, foregoing his college scholarship.

What do you think about Freddie Freeman’s net worth? Leave a comment below.