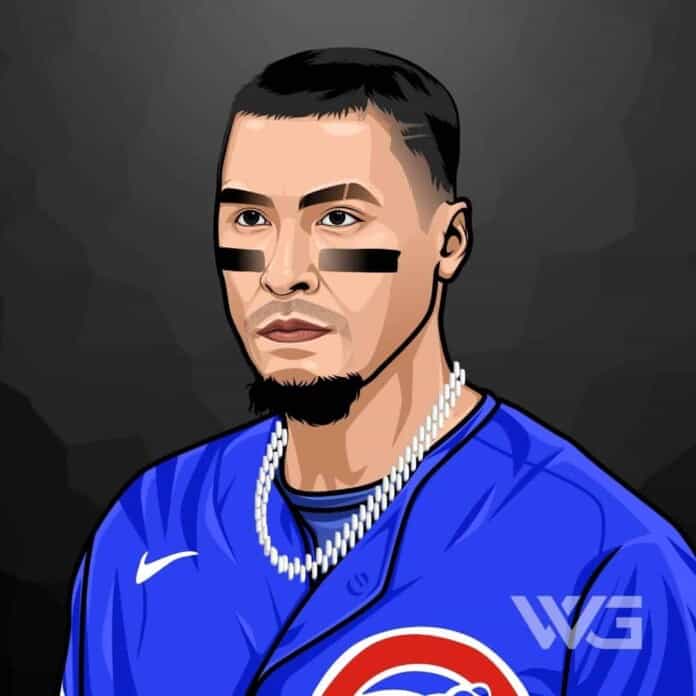 What is Javier Baez’s net worth?

He is the shortstop and second baseman for the Chicago Cubs of MLB. The Cubs selected Báez with the ninth overall selection of the 2011 MLB draft. He made his MLB debut in 2014. He is a two-time All-Star and has also won the Silver Slugger Award. Baez is also the cover athlete for MLB The Show 20.

As of December 2022, Javier Baez’s net worth is estimated to be roughly $10 Million.

Ednel Javier Baez was born on the 1st of December, 1992, in Puerto Rico.

Báez moved to Florida in 2005 along with his mother and siblings, two brothers, and a sister.

In Puerto Rico, he and his two brothers, Gadiel and Rolando, became familiar with the sport through their father, Ángel Luis Báez who, before his death when Javier was ten, heavily influenced their life and was responsible for their interest in baseball.

The Chicago Cubs, led by Jim Hendry, selected Báez in the first round, with the ninth overall selection of the 2011 Major League Baseball draft.

He began his professional career by playing shortstop for the Arizona Cubs of the Rookie-level Arizona League. He only played in three games, recording three hits, including two doubles, 12 at-bats, and two stolen bases.

Before the 2012 season, MLB.com rated Báez as the 62nd best prospect in baseball. He remained with the Cubs in extended spring training with other prospects, participating in 26 games and hitting 6 doubles, 3 triples, and 8 home runs, with 28 RBI, 11 stolen bases, and 23 strikeouts in 94 plate appearances.

In 2014, the Cubs promoted Báez to the major leagues. In his debut that day, he hit his first career home run, the game-winner in the 12th inning victory against the Colorado Rockies, becoming the first player since Miguel Cabrera in 2003 to hit an extra-inning home run in his debut.

As of December 2022, Javier Baez’s net worth is estimated to be roughly $10 Million.

Here are the best highlights of Javier Baez’s career:

“If it’s not a strike, I’m trying not to swing at it. I’m working on it. I’m starting backward, not swinging 100 percent. I’ve been taking that approach. I don’t want automatic swinging on 3-2.” – Javier Baez

“I know how I struggled last year. I’m trying to make my adjustments this year, and even if I don’t have a better year, I know what to do to get better. I will do it. We adjust, and the pitchers make adjustments. So it’s pretty tough, but I believe in myself.” – Javier Baez

“If I go to the free agency, I would like to play with Francisco Lindor. I loved playing with him in the World (Baseball) Classic. It is the only option I would take to play second base if it is to play with him; otherwise, I stay playing at shortstop.” – Javier Baez

Now that you know all about Javier Baez’s net worth and how he achieved success; let’s take a look at some of the best lessons that we can learn from him:

Consult not your fears but your hopes and your dreams. Think not about your frustrations but your unfulfilled potential.

Every strike brings us closer to the next home run.

Success begins by believing in what you can do. Don’t let other people discourage you in your path toward success.

How much is Javier Baez worth?

Javier Baez’s net worth is estimated to be $10 Million.

How old is Javier Baez?

How tall is Javier Baez?

Javier Baez is a Puerto Rican professional baseball second baseman for the Chicago Cubs of MLB.  The Cubs selected Báez with the ninth overall selection of the 2011 MLB Draft.

Baez is one of the best baseball players in this era. Born in Puerto Rico, Báez attended high school in Jacksonville, Florida.

In 2011, The Cubs selected Baez with the ninth overall selection of the MLB draft. He made his MLB debut in 2014.

As of December 2022, Javier Baez’s net worth is approximately $10 Million.

What do you think about Javier Baez’s net worth? Leave a comment below.

What is Adam Beyer's net worth?  Introduction  Adam Beyer is a...