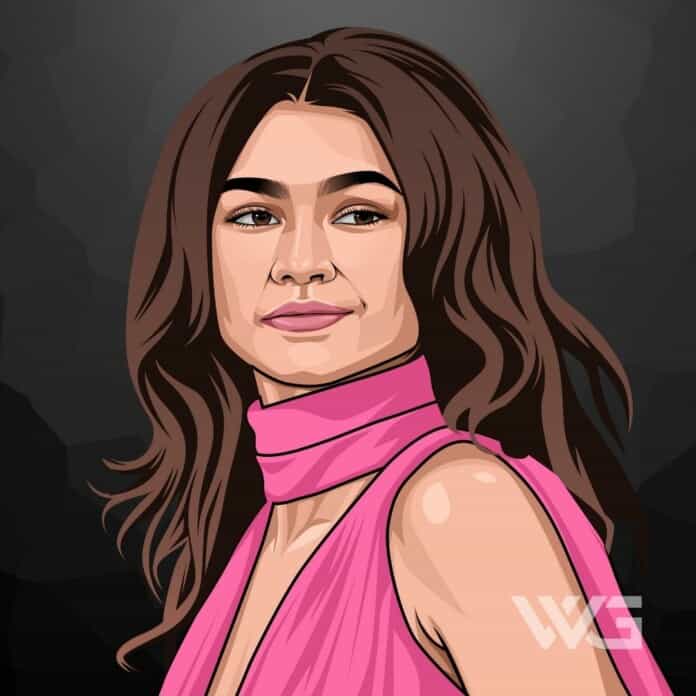 What is Zendaya’s net worth?

Zendaya is an African-American actress, dancer, model and singer from Oakland, California.

She began her career as a child model and backup dancer, before gaining prominence for her role as Rocky Blue along with her co-star Bella Thorne who played CeCe Jones on the Disney Channel sitcom Shake It Up. Today she is one of the most popular actresses in Hollywood and one of the most well-known figures in the entertainment industry.

Zendaya Maree Stoermer Coleman was born on the 1st of September, 1996, in Oakland, California, the only child of Claire Marie Stoermer and Kazembe Ajamu Coleman.

She attended Fruitvale Elementary School, where her mom was a teacher – Claire Stoermer was also a house manager for California Shakespeare Theater, where Zendaya took part in plays such as Richard III where she played Lady Anne or Twelfth Night. Later on, Zendaya attended Oak Park High School.

Coleman has appeared in numerous stage productions while she was attending Oakland School for the Arts, starring as Little Ti Moune in Once on This Island at the Berkeley Playhouse and the breakout role of the male character Joe in Caroline, or Change at Palo Alto’s TheaterWorks.

Zendaya began her professional career working as a fashion model for Macy’s, Mervyns and Old Navy. She was featured in an iCarly toys ad. She also appeared as a backup dancer in a Sears commercial, featuring Disney actress Selena Gomez.

In 2013, Zendaya took part in “Dancing with the Stars”, where she and her partner, Val Chmerkovskiy, placed second. In the same year, she released her debut solo single “Replay” and self-titled debut album, which reached position 51 on the US Billboard 200.

In 2015 she played the main character in another Disney Channel series – K.C. Undercover.

In 2016, Zendaya made her feature film debut as Michelle in Spider-Man: Homecoming, which was released in July 2017. The film grossed $117 million in its first weekend, ranking number one at the box office. Around the same time, she was cast as Anne Wheeler in The Greatest Showman, which also came out in 2017.

Zendaya was ranked one of the best dressed women in 2018 by a fashion website Net-a-Porter. That September Warner Bros. released the animated film Smallfoot, in which Zendaya voiced the yeti Meechee.

In January 2019, Zendaya was cast as Chani in the upcoming Denis Villeneuve adaptation of Dune alongside Timothée Chalamet in the leading role. The following month, she became a Lancôme spokesmodel.

In June 2019, Zendaya began starring in the HBO drama series Euphoria, an adaptation of the Israeli series of the same name. She plays Rue, a lying, drug-addicted 17-year-old girl and the narrator of the series. Because of this role, in 2020 Zendaya won a Primetime Emmy for Outstanding Lead Actress in a Drama Series.

In 2021, Zendaya voiced over Lola Bunny in Space Jam: A New Legacy, as well as starred in Spider-Man: No Way Home.

Zendaya is a very private person and usually doesn’t entertain questions about her relationship. Throughout the years, she’s been romantically linked with a few of her co-stars, such as Jacob Elordi but she never confirmed the relationship.

As of July 2021, Zendaya is said to be dating her co-star from the Spider-Man franchise – Tom Holland, who posted her on his Instagram a few times. Although, as with her former relationship, nothing has been confirmed.

Even though it is hard to estimate how much Zendaya makes yearly, as there’s a lot that goes into it (such as sponsorships from brands like Chi Hair Care, deals with brands like Tommy Hilfiger, her clothing line and shoe collection, magazines covers like the British Vogue in 2021 and so on), it is more or less known how much she made from individual projects. So, let’s break it down:

Here are some of the best highlights of Zendaya’s career:

“That’s the person I plan on being for a very long time: someone who stands up, someone who is an advocate for people, [even if it’s for] something that some people think is only hair.” – Zendaya

“I use my platform for more than just myself. Art is a reflection of human emotions. To neglect the political is to neglect what essentially is your job of storytelling. I would rather be known for the content of my character than for the project that I did.” – Zendaya

“It is important in this journey to remember that just because someone has inflicted hurt upon us, it does not give us the right to do the same. Body shaming and hurtful tactics will never get the job done.” – Zendaya

“I’ve always dressed, even when I was younger. My parents didn’t pick out my clothes or anything. They let me do that, which I think is an important thing because it allows kids to experiment and figure out what they like, even at a young age.” – Zendaya

Now that you know all about Zendaya’s net worth, and how she achieved success; let’s take a look at some of the best lessons we can learn from her:

Zendaya doesn’t care what anyone else thinks. Though it’s totally much easier said than done, it’s important to remember that the best person you can be is yourself!

2. You Before Anyone Else

In a society that sets ridiculous beauty standards, Zendaya is a breath of fresh air as she reminds fans that accepting and loving yourself comes first.

We call it girl power for nothing! Zendaya reminds girls everywhere to support each other instead of tearing each other down.

Zendaya has become a household name in Hollywood. She has a multi-faceted personality- she is an actress, singer, and dancer who has mixed ethnicity. The singer is a broad-minded person who deals with racist comments with a lot of maturities.

What do you think about Zendaya’s net worth? Leave a comment below.

If you’re curious about other celebrities’ net worths, make sure to check out our other articles on this!