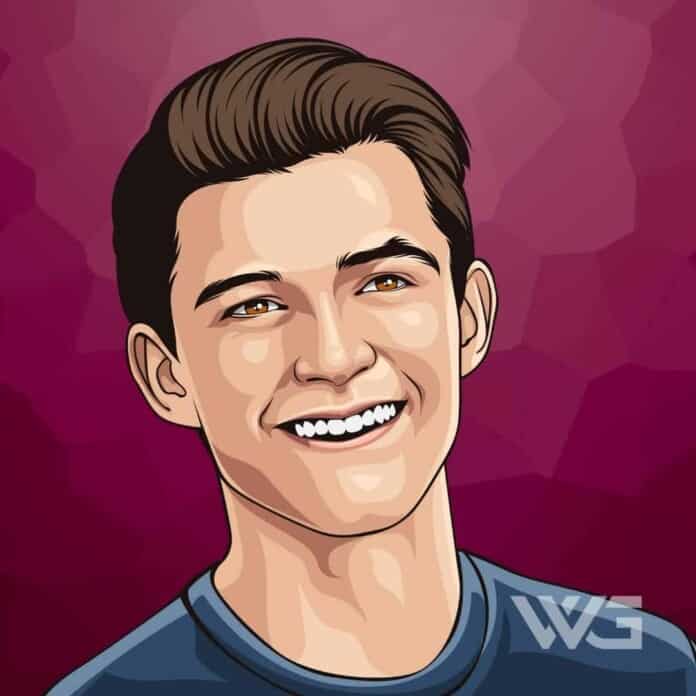 What is Tom Holland’s net worth?

As of February 2023, Tom Holland‘s net worth is estimated to be roughly $25 Million.

Thomas “Tom” Stanley Holland is an English actor, singer, and dancer from London. Holland is best known for playing Spider-Man in the Marvel Cinematic Universe.

Thomas Stanley Holland was born on the 1st of June, 1996, in London, England.

He was raised by his parents, Nicola Elizabeth and Dominic Holland. His father is a comedian, and his mother is working as a photographer. As a kid, he used to spend a lot of time with his brothers Sam, Harry, and Patrick.

Tom made his film debut in 2011 when he lent his voice in the English version of the popular Japanese animated fantasy film ‘Arrietty’.

His major breakthrough came in 2012 when he was cast alongside stars such as Ewan McGregor and Naomi Watts in the disaster drama film ‘The Impossible’. Holland was praised for his acting skills, with many saying that he could win an Oscar for his performance.

Though he didn’t win an Oscar, he did manage to win other major awards and nominations. In 2013, he appeared in a film titled ‘How I Live Now’ and was also seen in the short film ‘Moments’. The next year, he lent his voice for the British American drama film ‘Locke’.

In 2016, Holland played interesting characters in four popular flicks titled ‘Captain America: Civil War’, ‘The Lost City of Z’, ‘A Monster Calls’, and ‘Edge of Winter’. In ‘Captain America’, he played Peter Parker, which is one of the most popular recurring film roles in the history of Hollywood.

The following year, he reprised his role as Peter Parker in ‘Spider-Man: Homecoming’.

In 2018, he once again reprised his role as Spider-Man in the Marvel Studios’ superhero film, ‘Avengers: Infinity War.’ Tom has a host of upcoming films under his belt. Though he is growing from strength to strength as an actor, Tom says his ultimate goal is to become a director in Hollywood.

Here are some of the best highlights of Tom Holland’s career:

“Peter Parker is probably the most relatable superhero – maybe ever – because he goes through something that basically everyone has to go through. Whether it’s puberty or talking to girls or doing homework, he does it in such a human way. That’s why he’s such a beloved character: because so many people can relate to him.” – Tom Holland

“I was in my bed scrolling through Instagram. It had been about a month since my audition. And Marvel just posted a photo saying go to our website and find out who the next Spider-Man is. I went on the Marvel website on my computer, and there it was: The new Spider-Man is Tom Holland. I went ballistic – like, absolutely nuts.” – Tom Holland

“Colombia is so different from what I know, and every aspect of the country is different from England, and I loved it. I loved the culture and the food, and the coffee was amazing. The place that we were was stunning, and it really was quite an amazing experience to film out there.” – Tom Holland

“”My mom thought I could dance because I used to dance to this Janet Jackson song she’d play when I was a baby. Then she would take me to a Saturday dance school. I used to go every week and got spotted by a scout, who suggested I audition for the role of Billy in ‘Billy Elliot the Musical.” – Tom Holland

“There is so much to sailing a ship. There are about a thousand different lines on a big ship, and knowing what each one of those does, it takes a long time, and that’s why you have these cabin boys that start on the ship, and they learn throughout the years, and that’s why it takes so long to captain one.” – Tom Holland

View our larger collection of the best Tom Holland quotes!

Now that you know all about Tom Holland’s net worth, and how he achieved success; let’s take a look at some of the strongest lessons we can learn from his movies:

1. Great leaders Do the Small Things

2. Junk Can Be Useful

Be careful with this line of thinking. All manner of “junk” can be useful. It’s up to you to find out how to use what you’re given.

Something was different during the Marvel Studios introduction. Instead of the animated sequence, we’re so accustomed to seeing, we are treated to live-action images of Marvel characters.

This slightly different take on the Marvel Studios intro was fresh and interesting.

The new intro caught the attention of moviegoers. Many leaders are afraid of change. There’s a thought that tweaking anything can damage their organization. Get over that line of thinking. Change is good. Change creates progress. And every leader should desire progress. Bring change to your organization.

How much is Tom Holland worth?

Tom Holland’s net worth is estimated to be $25 Million.

How old is Tom Holland?

How tall is Tom Holland?

Tom Holland is a British actor, who is best known for portraying the famous superhero, Spider-Man.

He began his acting career when he was 12 years old. Holland has won many awards for his acting skills. He has received the prestigious ‘British Academy Film Award’ (BAFTA).

What do you think about Tom Holland’s net worth? Leave a comment below.