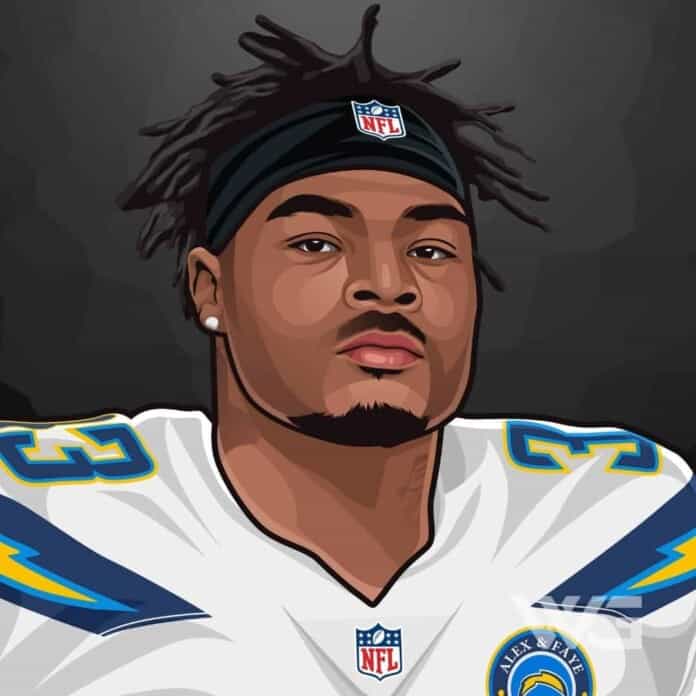 What is Derwin James’ net worth?

Derwin James is an American football strong safety for the Los Angeles Chargers of the NFL.

James played college football at Florida State. He was drafted by the Chargers in the first round of the 2018 NFL Draft.

James committed to Florida State University to play college football after receiving a scholarship offer after his freshman year in high school.

The Los Angeles Chargers selected James in the first round in the 2018 NFL Draft. James was the second safety drafted in 2018, behind Alabama safety Minkah Fitzpatrick (11th overall, Miami Dolphins).

In 2018, the Los Angeles Chargers signed James to a fully guaranteed four-year, $12.38 million contract that includes a signing bonus of $7.09 million.

He made his professional regular-season debut and the first career start in the Los Angeles Chargers’ season-opener against the Kansas City Chiefs and recorded three combined tackles, broke up two passes, and made his first career sack on quarterback Patrick Mahomes in their 38–28 loss.

On September 23, 2018, James collected nine combined tackles, deflected a pass, and made his first professional interception during a 35–23 loss at the Los Angeles Rams in Week 3.

On August 15, it was revealed that James had been dealing with a stress fracture in his right foot. The injury required surgery, requiring a maximum of three months to recover.

Here are some of the best highlights of Derwin James’ career:

“In the box, I feel they have to account for me in the run game, or I can blitz off the edge. When I’m at free, they don’t have to deal with me as much as when I’m at strong, so at strong, I feel like I’m able to impose my will more.” – Derwin James

“Guys, let’s look at the opportunity we have, the type of team we have, and let’s continue to work hard and grind every day.” – Derwin James

Now that you know all about Derwin James’ net worth, and how he achieved success; let’s take a look at some of the lessons we can learn from him:

When you achieve excellence once, you will never settle for mediocre again. Excellence is a habit and it does not go away easily.

Some people work hard but have no talent and other people have talent but do not work hard.

These are both sad situations, but the person who realizes their talent and doesn’t work to maximize it is a very sad and discouraging sight.

How much is Derwin James worth?

Derwin James’ net worth is estimated to be $1.3 Million.

How old is Derwin James?

How tall is Derwin James?

Derwin James was drafted in the first round of the 2018 NFL Draft.

He was ranked a five-star recruit by Rivals.com before being recruited by Florida State University.

As of November 2022, Derwin James’ net worth is approximately $1.3 Million.

What do you think about Derwin James’ net worth? Leave a comment below.