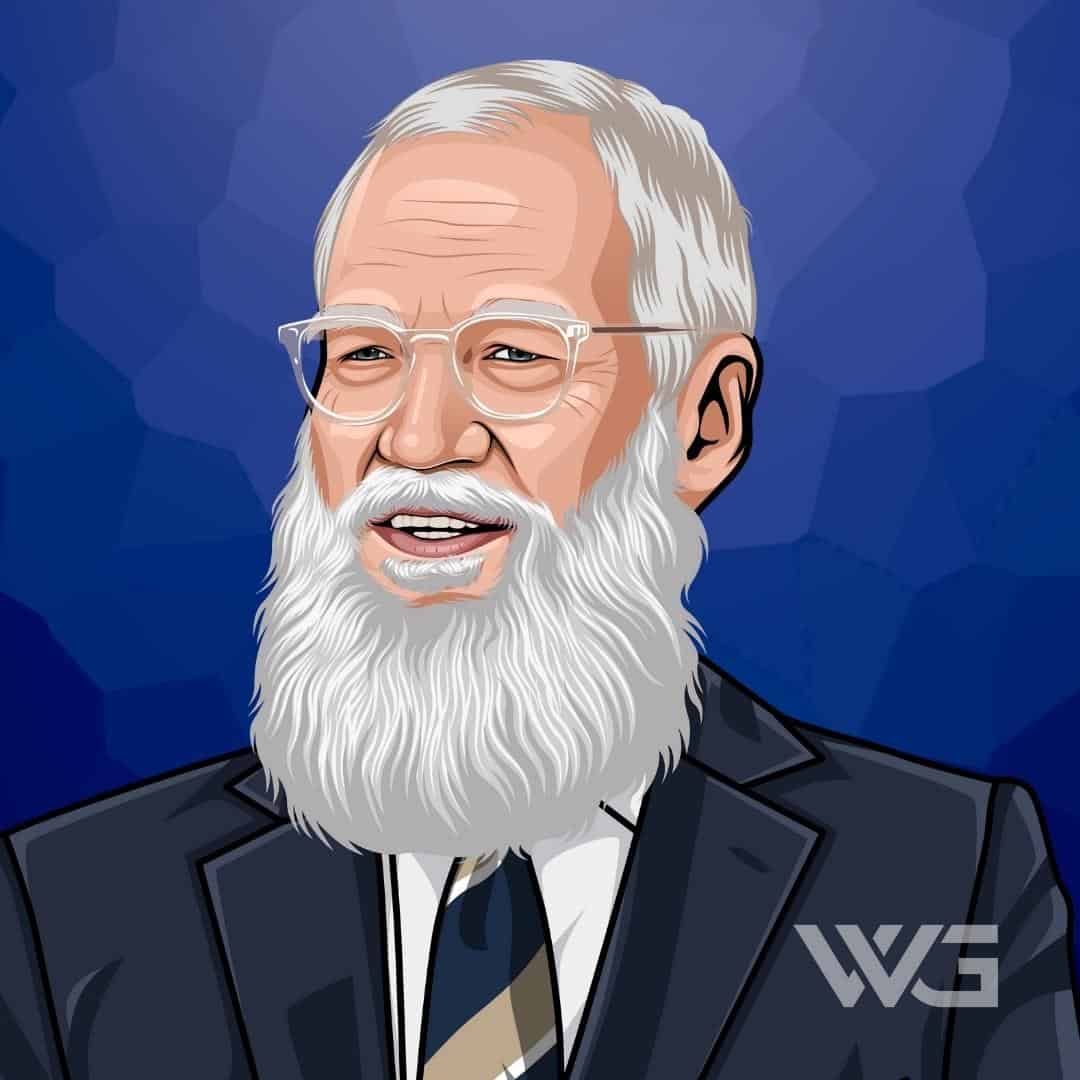 What is David Letterman’s net worth?

Netflix commissioned David to produce the series, My Next Guest Needs No Introduction With David Letterman, which has proven extremely popular. He has also produced some of the most successful prime-time TV comedies, including Everybody Loves Raymond and Ed.

As of December 2022, David Letterman’s net worth is estimated to be $400 Million.

David Michael Letterman was born on 12 April 1947, in Indianapolis, Indiana. His father, Harry Joseph Letterman, worked as a florist while his mother, Dorothy Marie Letterman Mengering, was a church secretary for the Second Presbyterian Church of Indianapolis.

David has two sisters, Gretchen Letterman and Janice Letterman. David grew up in Indianapolis on the north side. He had a passion for model cars and racers.

During his childhood, Letterman’s father survived a heart attack. This affected David to the extent that he was always worried about losing his father as a child. Unfortunately, David’s father passed away due to a second heart attack in 1973 at the age of 57.

He started his career as a newscaster at his college’s student-run radio station. It is now part of Indiana Public Radio.

Always willing to put in hard work and take the lead, he founded a campus radio station, WCRD 91.3.

With his degree in telecommunications, David first tried out television as a weatherman in Indianapolis before moving to Los Angeles where he performed at the Comedy Store as a stand-up comedian.

In 1978, he made his first appearance on the Tonight Show Starring Johnny Carson. Due to David’s visibility, he won himself a mid-morning show called The David Letterman Show which was canceled after only 3 months, despite receiving 2 Emmy Awards.

David developed a following, after moving to late-night television with the show, Late Night with David Letterman. This was a huge hit with night-time viewers and featured in the top 10 list, receiving 5 Emmy Awards and 35 nominations.

After Carson retired in 1992, David announced that he was leaving NBC to join CBS, as he felt that his prospects would be better there… and he was right. His new show, Late Show with David Letterman, quickly drew in more viewers than The Tonight Show.

David hosted the Academy Awards ceremony in 1995, earning mixed reviews from the viewers.

In January 2000, David had emergency quintuple heart bypass surgery. After his recovery, the first episode ended up being the show’s highest-rated episode.

In 2014, after 32 years of success, David announced his retirement from the Late Show, hosting the final episode on the 20th of May 2015.

Since announcing his retirement, David has avoided public appearances, but in 2016, he was a celebrity correspondent for the documentary series, Years of Living Dangerously.

In 2018, David returned to television as the host of “My Next Guest Needs No Introduction with David Letterman”. You can check out his official Instagram account to find out more about the show, as it is currently being aired on Netflix.

Behind the scenes, David founded and ran his own production company, Worldwide Pants.

Right from the beginning, David Letterman was on to something big. His style and way of interviewing reached both his guests and audience in a way that no other talk show host has managed to emulate. This is why he can command the impressively large salary that he does.

Here is an estimated overview of David Letterman’s annual income:

It is one thing to earn big money, but another thing entirely to hang on to it. David has made astute investments and his net worth has massively increased as a result of his intuitive grasp of finance.

Here’s a breakdown of David Letterman’s annual net worth:

In 1968, David married his college sweetheart, Michelle Cook, but divorced soon after in October 1977.

He started dating Regina Lasko in 1986, and the couple had a son together, Harry Joseph Letterman, on the 3rd of November 2003.

There was an incident in 2005, where police discovered a plot by Kelly Frank, the house painter, who wanted to kidnap David’s son and demand a $5 million ransom.

David and Lasko were married on the 19th of March 2009. They are still married despite the numerous affairs that David revealed on his show. A blackmailer attempted to reveal his affairs with multiple of his female employees, which caused CBS News to conduct an in-depth investigation of David.

David had a stalker, Margaret Mary Ray, who in May 1988 stole his Porsche, camped on his tennis court, and broke into his house multiple times. She was a diagnosed schizophrenic who died by suicide at the age of 46 in October 1998.

Another unhinged person took out a restraining order against Letterman as she claimed he was sending her coded messages via his television program. This apparently caused her bankruptcy and severe emotional distress.

Over the years, David Letterman’s name has become synonymous with outstanding comedy and insightful interviews. And he has been rewarded for his hard work with armfuls of awards and prizes.

Here are some of David Letterman’s most memorable career achievements:

With an outstanding number of awards and achievements under his belt, David shows no sign of slowing down. We expect to see him on the winner’s podium shortly.

How Does David Letterman Spend His Money?

David has a huge passion for cars and owns an impressive collection of the most expensive cars in the world, which he keeps under lock and key in his garage.

It has been reported that the collection consists of 10 Ferraris, 8 Porches, 4 Austin Healeys, 2 Honda motorbikes, a Chevy pickup truck, and one car from each automaker; Mercedes-Benz, Jaguar, MG, Volvo, and Pontiac.

David reportedly spent $10 million on 108 acres of land in Westchester County, New York. He has property on Martha’s Vineyard, in St Barths, and Montana. He lives at home in North Salem, New York, in a mansion that is purported to have cost more than $5 million.

Letterman supports many causes, donating large amounts of money to a variety of different charities. He donated nearly $600,000 to Habitat for Humanity, and he gave $10,000 to cancer research.

He founded The American Foundation for Courtesy and Grooming in 1993 and that foundation has given away over $1.2 million.

Over the years, David has developed a winning formula for his shows. Using humor and an engaging style, David elicits fascinating stories from his guests, often getting them to reveal a part of their personality that the audience has never seen before.

Here are some of the best highlights of David Letterman’s career:

Despite his age, David Letterman is still going strong and is as witty and engaging as ever.

Never at a loss for words, David Letterman has spent time with some of the most intelligent and astute individuals on the planet. He stands apart as a talk show host that is erudite and insightful, bringing out the best in everyone he meets.

Here are our favorite quotes from David Letterman:

With his business acumen and worldly-wise demeanor, David Letterman has seen and done it all. But it hasn’t gone to his head and his forthright approach is evident in lessons one can take away from his intriguing interviews.

No one is beyond reproach and, after years of experience, David believes that everyone deserves a second chance and the benefit of the doubt.

It is easy to be drawn toward money and fame, but following your passion will bring you true happiness.

3. Do Nothing But Your Best

Above all else, work hard. For it is by working hard that you bring out the best in yourself and others.

David Letterman has had a rollercoaster of a career and life. This has impacted his performances, drawing on his many and varied experiences. Through the rough patches that come with fame, David stood strong, holding his head high and charging straight on.

David has created the perfect life for himself, creating the career he has always wanted along the way. With his new show airing on Netflix, David’s net worth is definitely increasing by the minute.

As of December 2022, David Letterman’s net worth is estimated to be $400 Million.

What do you think about David Letterman’s net worth? Leave a comment below.