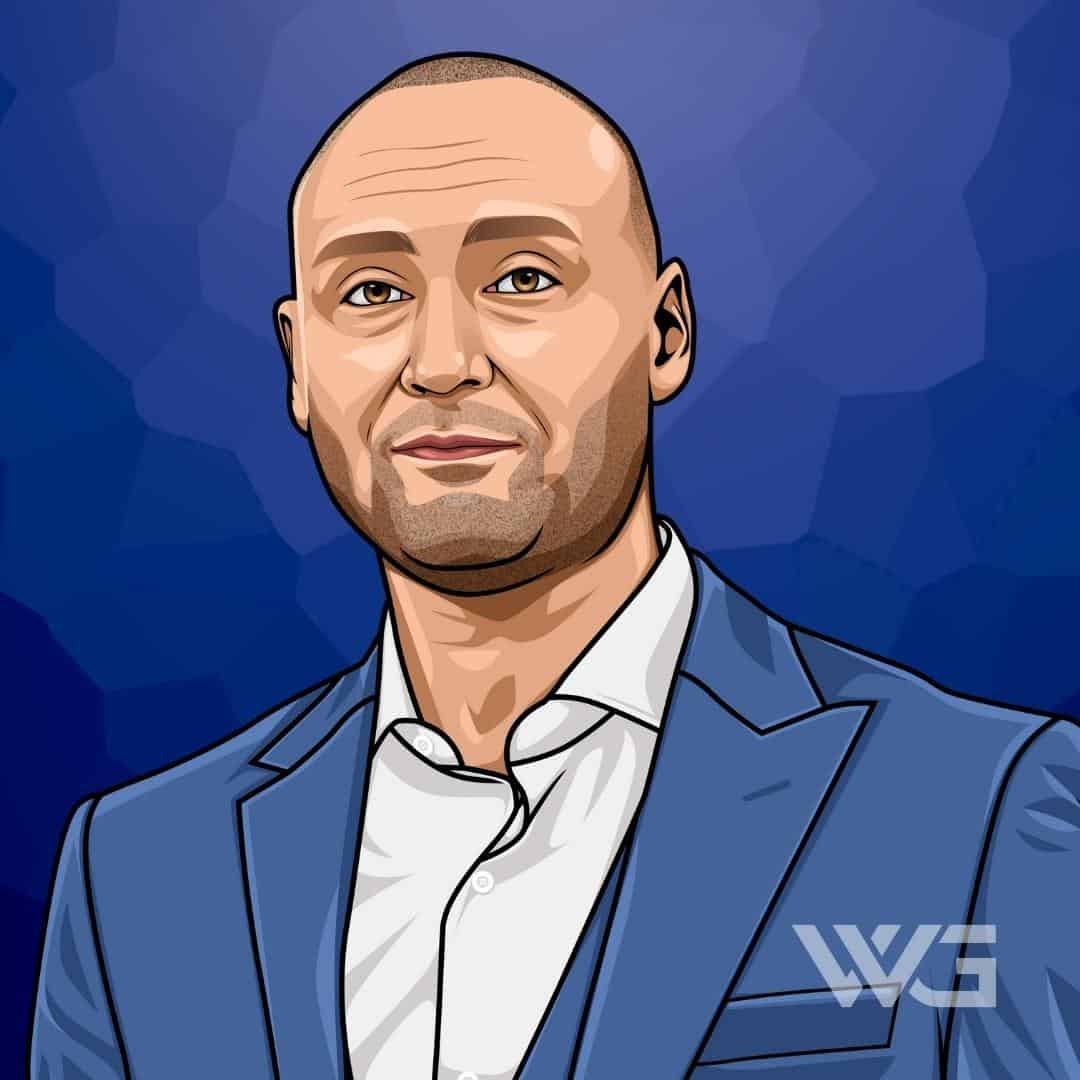 What is Derek Jeter’s net worth?

Derek Jeter is a mega-wealthy former baseball player turned businessman. He’s an inductee into the Baseball Hall of Fame and a five-time World Series champion.

His dream of playing for the New York Yankees came true, resulting in one of the most exciting 2 decades of baseball for both him and the team.

After retiring as a player, he took over the Miami Marlins. However, he is now retired and enjoying a good life due to his phenomenal earnings as a star player.

His mother was a professional accountant and his father was a substance abuse counselor. He has a younger sister, Sharlee, who is an ace softball player. The family moved to Kalamazoo, Michigan, where Derek developed his love of baseball.

Derek’s parents always tried to instill a positive message into their kids by not letting them say the word “can’t”, as they believed that one can do whatever one put one’s mind to.

At the age of 5, Derek started playing little league baseball.

The family was baseball-mad, with his grandparents regularly taking Derek to the New York Yankees games. It was through this early exposure that Derek’s fascination with one of the richest MLB teams , the Yankees, took hold.

His love for sports earned him a B’nai B’rith Award for Scholar Athlete in high school.

Not only did he play baseball, but he was also an exceptionally talented basketball player, who won an All-State honorable mention in the sport.

Even though he was excelling at basketball, he pursued a baseball scholarship to attend the University of Michigan.

Derek was drafted by the Yankees as a first-round pick in 1992.

But unfortunately, starting in the minor league class A, he didn’t do very well, with 21 mistakes in 58 games. But he knuckled down and, with plenty of practice, Derek started to up his game.

In 1993, he was named one of the “Most Outstanding Major League Prospects” by the South Atlantic League. Three years later, Derek started playing shortstop for the Yankees. In 1998, the Yankees won the World Series with Derek on their team.

He created a reputation for himself during a 1999 game against the Braves, which secured the Yankees another world series victory.

Derek earned a reputation as one of the premier postseason hitters in baseball. In the 2000s, Derek was named Most Valuable Player in the All-Star Game and World Series.

After helping to win many games and collecting an armful of awards, Derek’s most memorable event happened in 2009, when Derek broke the record for 2674 hits by a shortstop in major league history.

A serious injury to his ankle during the AL Championship Series, saw Derek announce his retirement at the end of the 2014 season.

He didn’t stay retired for long though and went into business in 2017, becoming a part-owner of the Miami Marlins.

Unfortunately for Derek, the Dolphins had a difficult few years and, due to the pandemic, had a short season in 2020.

On the back of this poor performance, Derek stepped down as CEO in 2022 and severed all ties with the team.

It is believed that Derek earned around $265 million throughout his baseball career. He is estimated to have a current yearly income of $16 million, which will no doubt continue to grow as his property investments pay off.

After playing consistently for 20 years for the New York Yankees, Derek has amassed a sizeable fortune as a professional sportsman. By carefully investing his substantial earnings, he has managed to create significant wealth.

Here’s a breakdown of Derek Jeter’s annual net worth:

Being Catholic is an important part of Derek’s life and he feels that his faith had a lot to do with his success while playing baseball.

After 20 successful years in sports, it is little wonder that Derek has managed to amass the loads of trophies and awards that he has. While he may not appear on the most expensive baseball cards in the world, he’s much-loved by his New York fans.

His talent and skill are legendary and he’s rightfully proud of his achievements over the years.

Here’s a look at some of Derek Jeter’s stand-out moments during his career:

With the news of Jeter’s return to New York, his fans are hopeful that he’ll be helping the Yankees grab some silverware in the not too distant future.

How Does Derek Jeter Spend His Money?

Derek Jeter loves real estate and has invested a large part of his fortune in 4 huge mansions.

He also owns a corner penthouse worth $20 million, in New York.

Derek owns some of the most expensive cars in the world, with his impressive fleet including Mercedes and Porsche sports cars.

Apart from his investments and property deals, Derek is also focused on giving back to the community, being well-known for his charity work.

He founded the Turn 2 Foundation in 1996 and has gone on to motivate countless individuals, helping them to turn away from drugs and alcohol and rather create a healthier, more purpose-driven lifestyle.

It is hard to pick out the highlights of Derek’s career in the limelight, as he never failed to perform fantastically well in front of the crowd.

He has a big-game temperament that ensures that he just gets better when the pressure is on. He is also a fantastic motivator, managing to bring out the best in his teammates.

Here are some of the best highlights of Derek Jeter’s career:

Now that Derek is no longer involved with the Miami Marlins, it’s anybody’s guess what he’ll be doing next. With his track record, we’re sure that something exciting is in the pipeline at the end of the 2022 season.

Derek Jeter was single-minded when it came to his performance on the field. Once he was in the zone, nothing could knock his focus.

But he’s also not your typical jock. He is deeply thoughtful and introspective, helping players and now troubled teens to make the best with what they have.

Here are our favorite quotes from Derek Jeter:

Derek Jeter has been a hard worker. Despite his obvious talent, he’s had to work hard to remain on top of his game.

He also knows that it is important to have a  higher purpose, something that makes what you are doing worthwhile and important.

Now that you know all about Derek Jeter’s net worth, here are some of the best success lessons to learn from Derek Jeter:

There is no word such as “can’t” when it comes to your dreams. You need to focus and find a way to make things happen, even when all seems lost.

2. You Need A Moral Code

It is always important to stick to your moral code. The mark of a true man is one who can stick to his beliefs, even when the going gets tough.

3. We All Make Mistakes

Failure is something you can learn from. Everyone makes mistakes. But it’s how you react to your mistakes that can make or break your career and your life.

Derek is considered one of the best shortstops in all of baseball history.

He worked hard to get to where he is and has inspired many young people to create a better lifestyle for themselves. He leads by example, having molded himself into both a successful businessman and a legendary sportsman.

With his baseball earnings, product endorsements, and careful property investment, Derek has created a huge fortune. This affords him and his family a luxurious lifestyle.

What do you think about Derek Jeter’s net worth? Leave a comment below.