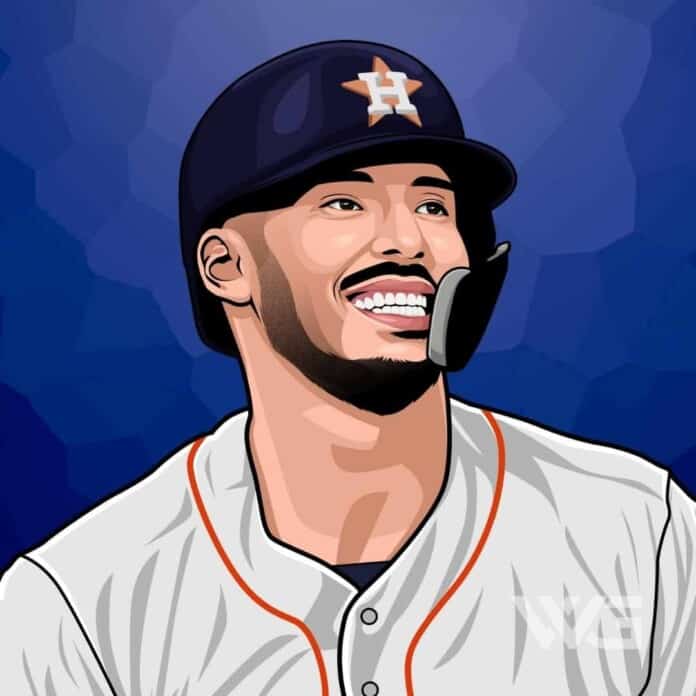 What is Carlos Correa’s net worth?

He is the shortstop for the Houston Astros of MLB. The Astros selected Correa with the first overall selection of the 2012 MLB draft.

Correa made his MLB debut in 2015 and won the American League Rookie of the Year Award.

As of February 2023, Carlos Correa’s net worth is approximately $7 Million.

Carlos Javier Correa was born on the 22nd of September, 1994, in Ponce, Puerto Rico.

Correa is the son to Carlos Sr. and Sandybel Oppenheimer. Although the family’s income was low, they had enough money to build a small house in Barrio Velázquez, a fishing village located in Santa Isabel.

From an early age, Correa often played catch in an alley adjacent to his home, which prompted a neighbor to suggest enrolling him in a youth league, the parent-pitch category, when he was five years old.

In 2012, the Astros selected him as the first overall pick, outranking the projected top pick, Mark Appel.

Correa was incredulous, only stating that he must have been dreaming, after entering the stage while hoisting the Flag of Puerto Rico.

He signed with the Astros on June 7, 2012, agreeing to a $4.8 million signing bonus. Correa chose to wear the number 12 in his introduction to the media, donning it in homage to Hall of Famer Roberto Alomar, but abandoned it afterward.

In 2015, the Astros promoted Correa to the major leagues. He debuted in a 3-1 loss to the Chicago White Sox, going 1-for-4 with an RBI single off of Chris Sale.

Correa began the 2016 season by becoming the youngest player in the Astros’ history to hit a home run on Opening Day. He missed playing time in September due to a shoulder injury.

As of February 2023, Carlos Correa’s net worth is estimated to be roughly $7 Million.

Here are the best highlights of Carlos Correa’s career:

“But as I said before, what doesn’t sit well with me is when you say false statements. If you don’t know the facts. If you’re not informed. This is America. You can say whatever you want. But Cody Bellinger’s job is to look for information.” – Carlos Correa

“But Altuve has never cheated. … He hit that home run off (Aroldis) Chapman fair and square. He was not wearing buzzers. That’s a story that a fake account on Twitter broke, and then people just got on that wagon and started talking about the buzzers.” – Carlos Correa

“A guy that hit .400 on the road? Are you kidding me? Like, that doesn’t sit well with me. If you state facts, if you tell the truth out there, if you talk about (2017) and whatever the Astros did, yeah, that’s OK. I’m not going to comment on that.” – Carlos Correa

“Did you see when he was celebrating when we won the championship?He was a part of the team and he didn’t say anything about it back then. He definitely should apologize as well. We all feel bad in this organization and we have to go through this process because of our wrongdoing back in 2017.” – Carlos Correa

“I have no problem with that because if they’re going to talk the facts, those are the facts. The commissioner’s office has their report. They said what they had to say about the investigation. But don’t go out there and tell us that we cheated for three years when.” – Carlos Correa

Now that you know all about Carlos Correa’s net worth, and how he achieved success; let’s take a look at some of his best lessons that we can learn from him:

There is no time for cut-and-dried monotony. There is time for work. And time for love.

The price of success is hard work, dedication to the job at hand, and the determination that whether we win or lose,

How much is Carlos Correa worth?

Carlos Correa’s net worth is estimated to be $7 Million.

How old is Carlos Correa?

How tall is Carlos Correa?

Carlos Correa is a Puerto Rican professional baseball player who was the #1 overall pick in the 2012 Major League Baseball draft at just 17 years old when the Houston Astros selected him.

Correa made his MLB debut in June 2015 for the Astros.

As of February 2023, Carlos Correa’s net worth is estimated to be roughly $7 Million.

What do you think about Carlos Correa’s net worth? Leave a comment below.