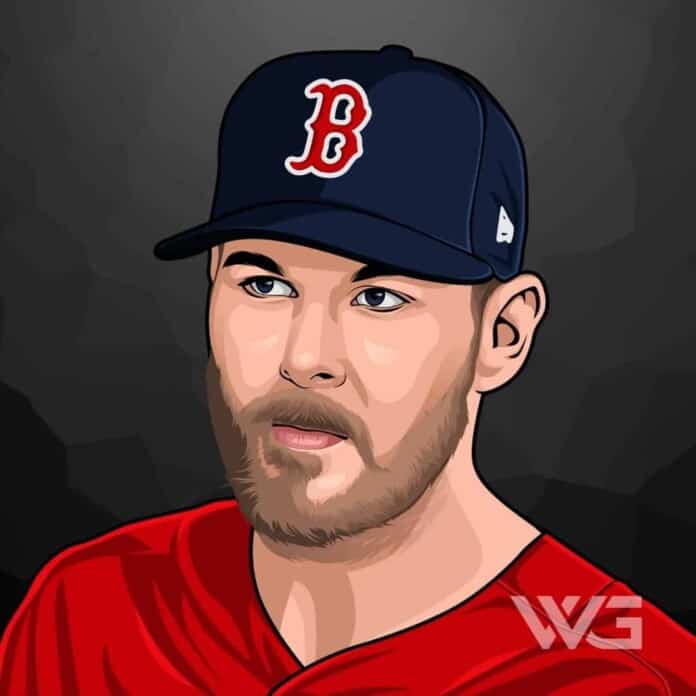 What is Chris Sale’s net worth?

He plays for the Boston Red Sox of MLB. Sale previously played in MLB for the Chicago White Sox, with whom he made his major league debut on August 6, 2010.

Sale is a five-time MLB All-Star, and he led the American League in strikeouts in 2015. Prior to playing professionally, he played college baseball for Florida Gulf Coast University.

Christopher Allen Sale was born on the 30th of March, 1989, in Lakeland, Florida.

He graduated from Lakeland Senior High School, where he played basketball and baseball.

After his senior year for the Dreadnaughts, Sale was drafted in the 21st round of the 2007 Major League Baseball Draft by the Colorado Rockies but chose not to sign and instead attended Florida Gulf Coast University.

Sale was drafted by the White Sox with the 13th overall selection in the 2010 MLB Draft.

Once he signed with the White Sox in 2010, he was assigned to the White Sox’ Class A affiliate Winston-Salem Dash.

He was called up to the majors for the first time on August 4, 2010, and made his MLB debut August 6, 2010, against the Baltimore Orioles in the 8th inning.

Sale was the first 2010 draft pick to be promoted to the majors. He got his first major league save on September 1, 2010, against the Cleveland Indians.

In 2013, Sale and the White Sox agreed on a five-year, $32 million contract with two option years depending on the team. On May 12, 2013, Sale threw a one-hit shutout during a 3 – 0 Sox victory over the Los Angeles Angels of Anaheim.

Sale started the 2015 year on the disabled list due to a foot injury. He returned on April 12, pitching 6 innings with 8 strikeouts in a 6 – 2 victory over the Minnesota Twins.

During a game against the Kansas City Royals on April 23, 2015, Sale was warned by home plate umpire Sam Holbrook after hitting Mike Moustakas with a pitch.

He began the 2017 season by striking out 10 or more batters in 8 consecutive starts, tying the major league record shared by Sale himself and Pedro Martínez.

As of December 2022, Chris Sale’s net worth is estimated to be roughly $24 Million.

Here are the best highlights of Chris Sale’s career:

“Plain and simple. I don’t think I’ve ever let anybody down this hard, ever. And that sucks. Honestly. That sucks. Someone gives you something because they believe in you, they expect something from you and you don’t live up to that.” – Chris Sale

“I know the situation we’re in right now and it’s not fun. There’s an expectation level – not only from the fans, our team (the media) and myself — hold me to, and I haven’t met that. I haven’t. This is about as tough of a situation as I’ve ever been in.” – Chris Sale

“I have an expectation level that’s never changed. They put faith in me and I messed up. I’m not living up to that. That’s what I battle with.” – Chris Sale

“I don’t really remember the last thought I had before I went under because I got the surgery on my birthday. I looked at the whole thing from a completely different perspective than most people did. A lot of people thought me getting Tommy John surgery was like this big.” – Chris Sale

Now that you know all about Chris Sale’s net worth, and how he achieved success; let’s take a look at some of his best lessons that we can learn from him:

However difficult life may seem, there is always something you can do and succeed at.

Never give up on your goals, fight and be tough to win.

It’s all about our mindsets, don’t get lost.

How much is Chris Sale worth?

Chris Sale’s net worth is estimated to be $24 Million.

How old is Chris Sale?

How tall is Chris Sale?

Chris Sale is an American professional baseball player who has been a three-time All-Star from 2012 to 2014 and was named American League Pitcher of the Month in May 2012.

Sale was born in Lakeland, Florida. He graduated from Lakeland Senior High School. After his senior year for the Dreadnaughts.

What do you think about Chris Sale’s net worth? Leave a comment below.

What is Brie Larson's net worth? Introduction  As of ,...