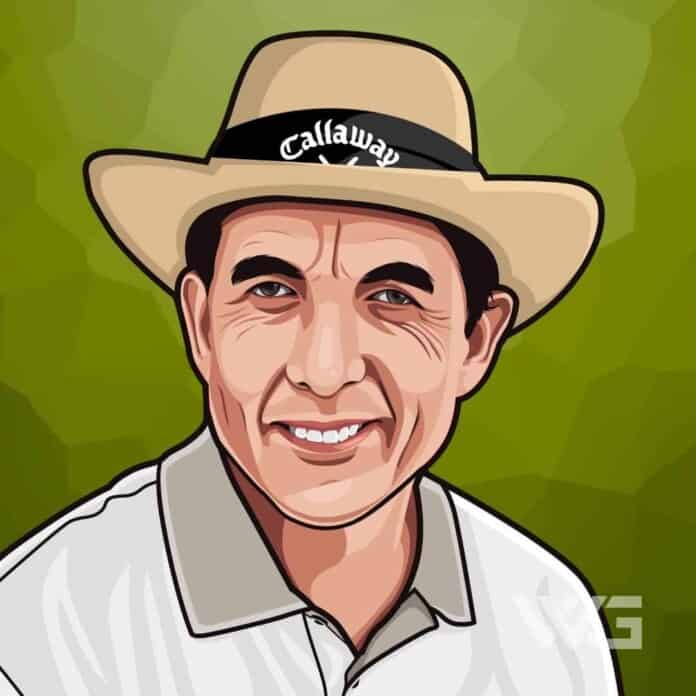 What is David Leadbetter’s net worth?

David Leadbetter is a golf instructor.

Leadbetter had an interest in the techniques, mechanics, and psychology of the sport. Leadbetter soon moved into instruction and rose to fame in the 1980s when he rebuilt the swing of Nick Faldo. Today, he runs an international chain at the ChampionsGate Golf Club in Davenport, Florida, the U.S., which has 36 holes designed by Greg Norman.

David Leadbetter was born on the 27th of June, 1952, in Sussex, England. He started his career in the mid-1980s with Sir Nick Faldo.

Since childhood, he had an interest in golf, leading him to figure out the secrets to lead a good game. He left his studies and thought of making his career in golf. For this reason, despite being a good golf player, he put more effort into becoming a golf instructor.

Since he launched the first Leadbetter Golf Academy, he has coached players to 26 major championship titles and over 150 individual worldwide tournament victories.

Leadbetter concentrates on teaching tour professionals on instructing other coaches on his methods. Apart from Faldo, his students include Nick Price, Charles Howell III, Michelle Wie, Lydia Ko, and Byeong Hun An.

He has authored eight books, and they have sold millions of copies, making him one of the best-selling golf instruction authors in the world. Leadbetter has appeared in the video game ‘David Leadbetter’s Green’s’ in 1992. He has also produced several instructional videos, DVDs, and other mixed media.

In 2000, GOLFZON was founded in South Korea. With the largest industry market share, more than 57 million rounds are played on GOLFZON simulators. Leadbetter worked this together with Korean golf technology giant Golfzon Newdin Holdings.

He also classes children’s physical, mental, and social skills through combined activity stations on golf basics. In 2019, The Leadbetter Golf University was launched. This digital offering provides instructors with a pathway to further their education and development through specialized courses.

Here are some of the best highlights of David Leadbetter’s career:

“Obviously, to maintain safety for all parties, my instruction has been fairly limited. Apart from the odd lesson with tour players and full-time juniors who are working on games on a limited basis, I have cut back to a large extent.” – David Leadbetter

“Technology is one thing, a more systematic approach to teaching but in some ways, instruction has become far too complex for the average golfer and geared more toward a good player or a potentially good player.” – David Leadbetter

“Teaching a world-class player is harder to do as you are involved in the way a player makes a living as opposed to improving the enjoyment of the average golfers leisure time.” – David Leadbetter

“Obviously, in order to maintain safety for all parties, my instruction has been fairly limited. Apart from the odd lesson with tour players and full-time juniors who are working on games on a limited basis, I have cut back to a large extent.” – David Leadbetter

“I still work periodically with Ernie. We had a little break a few years ago, but whenever I’m at a tournament now, and he’s there, I always watch him hit balls. And it’s amazing, so much of the stuff that we work on when I see him today is stuff that we worked on 25 years ago.” – David Leadbetter

“The way I’d go about it with somebody like Ernie is you make a couple of little suggestions. You can ask how something feels, and then when they say it feels like this, you say: ‘Well, that’s exactly right.’ So a lot of it comes from them rather than me telling them, which is an ideal way of doing it because that shows them they’re reading it correctly.” – David Leadbetter

Now that you know all about David Leadbetter’s net worth and how he achieved success; let’s take a look at some of the lessons we can learn from him:

The key is to have a daily routine and make sure you plan your day out in advance and complete the tasks or activities that you planned whether it be to answer emails, online lessons, reading, or exercising.

So you get in the mirror, you work at it, or especially in this day and age, if you see your swing on film, check it out, because you can see tendencies. Every player has tendencies, which under pressure, they revert back to. But leading players, they’re just like any other golfer, they forget.

Leadbetter counts “instinct” as the most valuable tool at his disposal.

How much is David Leadbetter worth?

David Leadbetter’s net worth is estimated to be $20 Million.

How old is David Leadbetter?

How tall is David Leadbetter?

He has competed on the European and Southern African tours as a player. He started to instruct other golfers and helped Nick Faldo rebuild his swing, leading to his winning six championships. Leadbetter runs an international chain of golf academic which are located in Florida. He has produced videos, DVDs, video games, and more.

What do you think about David Leadbetter’s net worth? Leave a comment below.