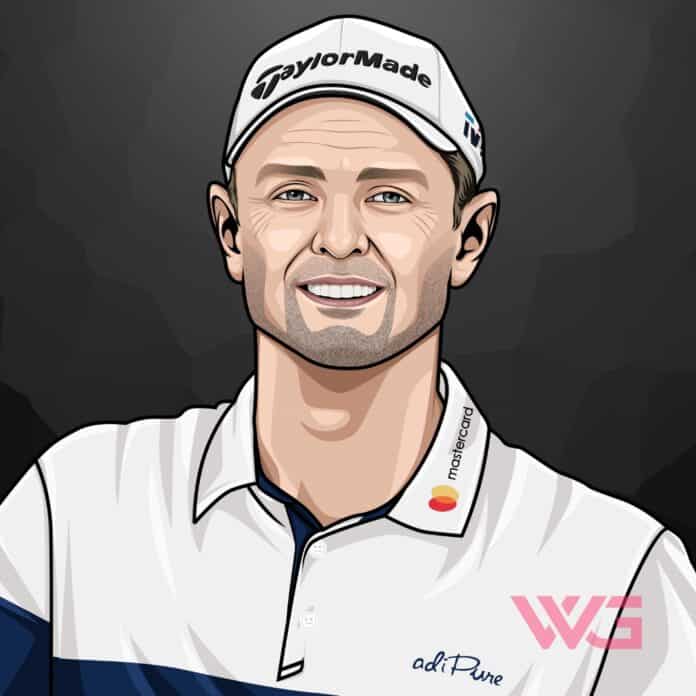 What is Justin Rose’s net worth?

Justin Rose won major championships and surprised the golf world with his performance at the U.S Open in 2013.

Since then, he has ranked 3rd in the world, won many awards, and attended the Summer Olympics in Rio de Janeiro.

His mother, Annie, and the family moved to England when Justin was only 5 and he took up golf shortly after arriving in Britain.

Justin practiced and perfected his golf technique at the nearby, Tylney Park Golf Club. Once he started to become comfortable on the golf course, he moved to the Southwood Golf Club.

At the age of 11, he had already scored an impressive 70 shots over 18 holes.

He became a professional golfer while still a teenager, and at the age of 17 played in the Walker Cup in 1997 and then again in 1998.

Of all his impressive early performances, the one that cemented his future as a successful golfer was the result at the 1998 Open Championship at the Royal Birkdale.

Even though he had an extremely successful amateur career, Justin struggled at the beginning of his professional career. Despite his early troubles, he soon proved himself after rising to prominence on the European Tour.

With four European Tour wins to his name, he found it difficult to split his time between Europe and America. But he made his biggest breakthrough in America after placing third at the Memorial Tournament in 2010.

Justin established himself as a frequent contestant for honors in both Europe and on the PGA Tour after his victory at the 2011 BMW Championships.

During the 2010s, Justin secured at least one tournament win each year. This resulted in him reaching a career-high after finishing second at the Arnold Palmer Invitational, which saw him rank 3rd in the world.

Justin was well on his way to a profitable career after earning his first major victory at the 2013 U.S. Open and then made history by being the first Englishman to win the U.S. Open in over 43 years.

After that, Justin diverted his focus to the Olympic Games tournament in Rio de Janeiro in 2016, achieving a hole-in-one during the Olympic event and finishing the competition with a gold medal.

Justin moved to world number one in 2019, attracted a host of new sponsors and last appeared at an event at the U.S. Open at Pebble Beach Golf Links in 2019.

He suffered a back injury which saw him withdraw from the 2022 British Open, and was replaced by the Japanese player, Rikuya Hoshino, after it was confirmed that he would not return.

Justin joins the likes of Ernie Els, Gary Player, Jack Nicklaus and Fred Couples as one of the best players to set foot on a golf course.

Justin Rose has consistently earned well over a million dollars each year since he first joined the professional circuit.

With his current back injury preventing him from playing, Justin is being careful to avoid further injury.

Should his injury prove to be too severe, it is unlikely that he will return to his previous tournament-winning form.

Justin has suffered a loss of form over the last 2 seasons, being unable to secure a top 3 finish.

Golf pundits do not expect him to return to his earlier form, as the 42-year-old’s age seems to have finally caught up with him.

Here’s a breakdown of Justin Rose’s annual net worth:

It is never easy to watch a great player slide down the rankings as he gets older, and Justin has battled valiantly to shrug off his nagging back problems.

With a tough field of hungry players behind him, Justin is in for a tough, uphill climb if he is to see any of his past glories revisited.

In 2006, Justin married his long-term girlfriend, Kate Philips. The couple has since then had two children; Lottie and Leo.

Justin and Kate have come together to create the Justin Rose Ladies Series, to help support women’s games during the Ladies European Tour.

In 2003, Justin lost his father Ken to cancer which, despite his grief, resulted in his U.S. Open triumph on Father’s Day to honor him.

Justin and his family live in a riverside apartment located in London. You can catch up with Justin on his official Instagram account to see what he’s currently up to.

Justin was heavily focused on winning an Olympic gold medal and his showing at the Summer Olympics was a festive affair.

Over the years, Justin has faithfully represented Great Britain across the world and was honored for his contribution to sport by the Queen in 2017.

Here are some of the most memorable moments from Justin Rose’s career:

Rose is a talented player who has spent a considerable amount of time perfecting his game.

However, what separates players at the top of the leaderboard is often their mental strength, which he has in spades.

How Does Justin Rose Spend His Money?

As is common for all golf professionals, equipment and clothing brands are keen to have a top player on their books.

However, Justin cut off TaylorMade to sign an equipment deal with the Honma brand in 2018. He also switched from the Adidas brand to the Bonobos brand at the same time.

With multi-million dollar deals for sponsorships and endorsements, Justin has made a fortune outside of his tournament prize money.

He has a sizable investment portfolio with a focus on property. Justin owns both a riverside apartment in London where he spends most of his time, as well as a house in the Bahamas.

Justin loves cars and some of the most expensive cars in the world are housed in his garage, with his favorite being the BMW i8.

Rose’s career has made him one of the richest golfers in the world and with his endorsement deal with Honama, he’s sure to make a lot more money in the years ahead.

Justin is always very honest with himself and his fans as to how he is performing.

He is the first to admit when things are not going well, but he always remains positive and his belief in himself never wavers.

Here are some of the best highlights of Justin Rose’s career:

His result in 2018, beating Woods and claiming the PGA tour title, must rank as one of the most satisfying results of his career.

Rose is never short of words when discussing his favorite topic, golf.

He’s spent his entire adult life training and competing in one of the most competitive sports in the world and coming out on top.

Here are our favorite quotes from Justin Rose:

Despite his amazing talent and ability to bounce back, Justin is also very down-to-earth in his approach to golf.

He knows that there is luck involved, and doesn’t take himself too seriously, no matter the outcome.

Now that you know all about Justin Rose’s net worth, here are some of the best success lessons to learn from Justin Rose:

1. Be Ready For What Winning Brings You

With victory comes certain penalties, and sometimes the spotlight isn’t the best place to be.

To fully prepare for what is to come, you must think through the outcomes and know in advance what you’ll do in each scenario.

Justin started his professional career with a lot of promise but ended up not doing well at all.

However, this didn’t stop him from digging deep and achieving the results he knew he was capable of.

3. Don’t Let Fame And Money Go To Your Head

Justin is known for his genuinely nice personality and always has a kind word of encouragement wherever he goes.

Despite his great wealth and obvious talent, he has never allowed it to influence or change the person he is deep down.

This South-African Englishman took the golf world by storm and made an impact at a very young age.

He is known to be one of the most competitive professional golfers in the world and his head-to-head with Tiger Woods is legendary.

Above all else, he is a charitable person, who has used his great wealth to help those around him.

While his current form is suffering due to injury, his fans hope to see him back on the circuit very soon.

What do you think about Justin Rose’s net worth? Leave a comment below.