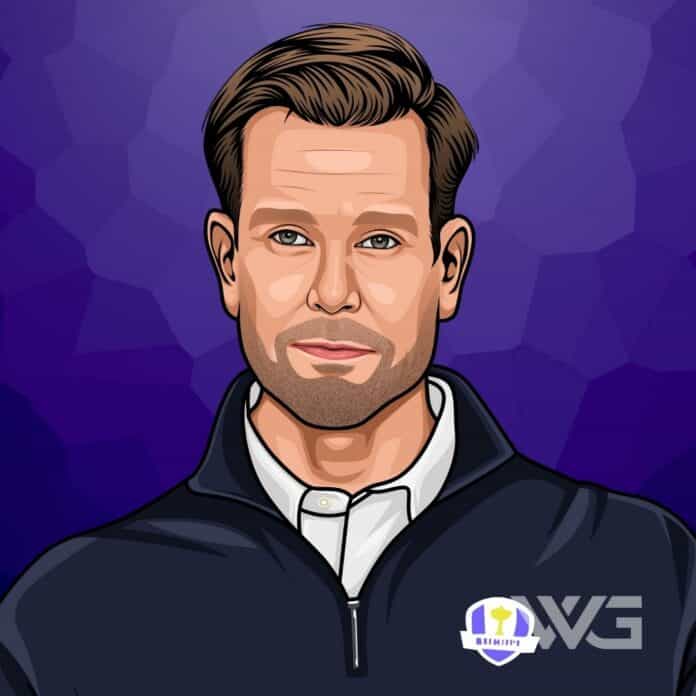 What is Henrik Stenson’s net worth?

Henrik Stenson is a Swedish professional golfer who has won many tournaments, including the European Tour nine times and the PGA Tour four times.

He was ranked in the top ten for more than 100 weeks and has been named European Golfer of the Year.

As of January 2023, Henrik Stenson’s net worth is estimated to be $25 Million.

Henrik Olof Stenson was born 5 April, 1976, in Gothenburg, Sweden, where he began golfing from the age of 12.

He was trained by local pro Richard Bayliss at Gullbringa Golf & Country Club, in Kungälv, north of Gothenburg.

Henrik Stenson’s career as a professional golfer began in 1998, topping the money rankings of the Challenge Tour the following year.

In 2001, Stenson won the Benson and Hedges International Open, his first European Tour victory, and continued to finish in the top 10 over the following years.

Stenson debuted at the Ryder Cup in 2006, defeating David Toms and Stewart Kink to win the cup for his team.

He continued to compete against some of the best golfers of his generation, playing against Phil Mickelson in the 2013 Open Championship.

The same year, Stenson went up against Tiger Woods and took the lead over the iconic golfer in the FedEx Cup standings.

His impressive net worth has been enhanced through many brand endorsements, including for the makers of some of the most expensive watches in the world, Audemars Piguet.

As his career has progressed, Henrik Stenson’s career earnings have continued to climb to reflect his rise through the golfing ranks.

From earning several hundred thousand dollars per year to taking home a salary in excess of $10 million, Stenson’s earnings have continued to grow in recent years.

While Hendrick Stenson’s net worth may fall short of some of the richest golfers in the world, he’s nevertheless enjoyed a steady increase in his wealth and assets.

His placement in the world’s top ten rankings for several consecutive years raised his profile and allowed him to build his fortune through brand sponsorships.

Stenson continues to play in high-profile contests such as the Ryder Cup and PGA Tour, so we can expect future victories to increase his net worth even more.

During the mid-2000s, Henrik Stenson married fellow Swede Emma Löfgren in Dubai after meeting her at the University of South Carolina ten years earlier.

In 2007, she gave birth to their first child, daughter Lisa, with their son Kalle following in 2010.

Henrik Stenson has enjoyed over 20 professional wins since his career began, making him one of the most successful golfers of his time.

Here are some of the notable victories from Henrik Stenson’s career:

With Stenson continuing to play golf professionally in various tournaments, his list of victories and awards is likely to increase in the future.

How Does Henrik Stenson Spend His Money?

While Henrik Stenson’s net worth falls short of the richest athletes in the world, he can still afford a luxurious lifestyle.

This wealth has allowed him to purchase expensive cars, including a BMW 7 Series and a Mercedes-Benz concept car.

Along with his wife and children, Stenson lives in Lake Nona Golf & Country Club in Orlando, Florida.

After playing amateur golf as a teenager, Stenson has gone on to enjoy a successful and lucrative career as a professional golfer.

This includes many high points of note, as his skills have improved and the level of play has gone to new heights.

Here are some of the best highlights of Henrik Stenson’s career:

More high points and notable moments in his career are inevitable as Stenson continues to impress fans with his performance on the course.

Over the course of his career, Henrik Stenson has been happy to discuss his approach to his craft and thoughts on the golfing industry.

He’s elaborated on his mindset while playing major tournaments and how he focuses to deliver his best performance.

Here are our favorite quotes from Henrik Stenson:

Now that you know all about Henrik Stenson’s net worth let’s see how we can improve our own lives by examining his path to success.

Stenson’s commitment to constant improvement, reflected in his career, can help us find the time and dedication to achieve our goals.

Here are some of the best success lessons to learn from Henrik Stenson:

Many people fall flat when faced with a real challenge or pressure, something Hendrik Stenson is very familiar with.

He’s faced off against some of the best golfers in the world, yet kept his cool and emerged victorious.

It goes without saying that if you want to become the very best you can be, you must strive toward perfection in everything you do.

3. Use Your Time Wisely

Practice makes perfect, so you should use every spare moment you have to practice your particular skills and interests to hone them further.

That wraps up this article exploring the professional career and sponsorships that have helped Swedish professional golfer Henrik Stenson earn his net worth.

His career continues to show promise for more tournament victories that will further enhance his impressive fortune.

We’ll update this article to include all the latest information as and when it emerges, so be sure to check back again in the future.

As of January 2023, Henrik Stenson’s net worth is estimated to be $25 Million.

What do you think about Henrik Stenson’s net worth? Leave a comment below.

Daniel Cormier is a former amateur wrestler that became one of the richest and most successful MMA fighters in the world.