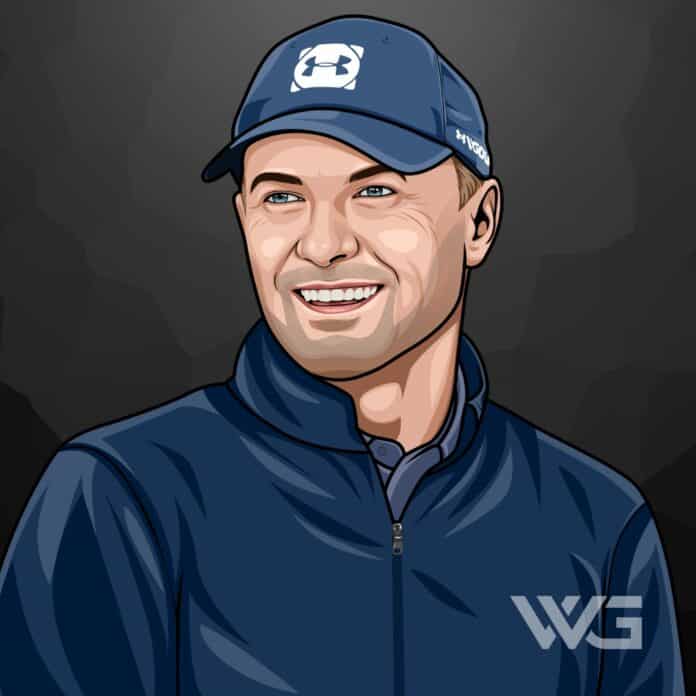 What is Jordan Spieth’s net worth?

Jordan Spieth is a record-breaking golfer who has dominated junior golf and has become one of the elite since turning professional in 2012.

He’s one of the highest-earning athletes in the world, reaching the top of his sport in a few short years while breaking multiple PGA Tour records along the way.

He comes from an athletic family with his mother, Chris, having previous experience of basketball, and his father, Shawn, playing baseball in college.

His parents made sure to introduce exercise and sports into their children’s lives at a young age.

Jordan and his two siblings played various sports, including football, baseball, and basketball. While still young, young Jordan played golf for the first time on the lawn of his family’s home and immediately took to the sport.

He asked his parents to become members of the Brookhaven Country Club and, since then, has been on the path to an extremely successful golfing career.

He graduated from Jesuit College Preparatory School in 2011 before starting his junior career.

Jordan’s amateur career was impressive by anybody’s standards. His first major tournament result as a junior golfer came with his second place at the 2008 Junior PGA Championships. He repeated the performance in 2009 and was named Rolex Junior Player of the Year.

By the time he turned 18, Jordan had secured the number one place in the AJGA Golf Rankings. He then made a name for himself at the 2011 Walker Cup while still studying at the University of Texas.

Jordan decided to go pro in 2012 and became the first teenager to ever win a PGA Tour since 1931.

This led him to become a full member of the PGA Tour and he was soon playing for the United States team at the Presidents Cup in 2013.

He played his first Masters in 2014, becoming one of the youngest Americans to play in the Ryders Cup in the same year.

Jordan won the Emirates Australian Open and was victorious at the Hero World Challenge. His many tournament wins in 2015 set Jordan on the path to number one after winning the Tour Championship.

Along with a host of wins and numerous awards, Jordan won the 2016 Open Championship.

He then decided to become a part of the Player Advisory Council while being the PGA Tour’s Chairman.

His recent performances include winning his 13th PGA Tour title and winning several matches at the 2022 Presidents Cup while playing for the United States team.

Jordan Spieth is one of only a very few teenagers to win a PGA Tournament, the last being in 1931.

After dominating the amateur circuit, Jordan went about dominating the professional tour. However, the competition was a fair bit tougher than he expected and it was not all plain sailing.

From the outset, Jordan has earned large paydays, earning huge amounts for his efforts.

Despite initially not making the cut for the PGA tour, he upped his game and started placing well, earning significant tournament fees for his efforts.

These contracts are extremely lucrative, sometimes dwarfing his earnings from winning tournaments.

Here’s a breakdown of Jordan Spieth’s annual net worth:

All of this has made him a very wealthy golfer, with a significant investment portfolio and a lifestyle ordinary players can only dream of.

Jordan married his childhood sweetheart in 2018 during Thanksgiving weekend. They had announced their engagement in December 2017, but the details of their wedding were a closely guarded secret.

There were a few photos from his bachelor’s party and some of his wedding reception, but the couple kept the whole event under wraps.

The next major news story involving the couple was the birth of their son Sammy, who arrived in 2021. Jordan posted pictures of his newborn son on his official Instagram account to much celebration.

He is quite open about his religious beliefs as a Catholic and regularly attends PGA Bible Study.

Right from the start of his career, Jordan has been winning awards and tournaments.

He has won some of the most prestigious tournaments on the PGA tour and his record looks set to improve even further, given his recent form while on tour.

Here are some of the more memorable moments from Jordan Spieth’s career:

As a comparative youngster on the professional tour, Jordan is aiming to complete the grand slam within the next few years.

For a player to achieve this at such a young age is incredibly rare and will place him among the very best golfers in the history of the game.

How Does Jordan Spieth Spend His Money?

Jordan doesn’t speak much about money and his spending and investments are well-guarded secrets.

However, he and his wife founded the Jordan Spieth Family Foundation, which is involved in various types of charities, such as those helping military families, pediatric cancer care, as well as offering bursaries to students.

He knows the value of real estate as a prime investment and purchased a mansion in Dallas from Hunter Mahan for $7.15 million in 2016.

Being a Texan, Jordan is a fan of big toys and when it comes to motor vehicles, he drives some of the most expensive cars in the world, including the mighty Mercedes Benz CLS V6.

He’s also sponsored by Rolex, so wears one of the most expensive watches in the world on his wrist.

For Spieth to complete the Grand Slam, he just needs a PGA Championship victory to his name to join the leading lights of golf such as Ben Hogan, Gary Player, Bobby Jones, Gene Sarazen, Jack Nicklaus, and Tiger Woods, as the only players to achieve this record.

Here are some of the best highlights of Jordan Spieth’s career:

Jordan Spieth has achieved some of the most incredible golf results produced by any golfer in the history of the game.

His achievements are unusual, and he joins a small group of players who have made such a huge impact on the game at such a young age.

Jordan has been confident in his abilities from a young age but acknowledges the hard work it takes to reach the top in such a competitive sport.

Here are our favorite quotes from Jordan Spieth:

“Whenever the heat’s on, my whole life, I’ve just kind of learned to focus a little more.” – Jordan Spieth

“I’ve told myself I have a chance to make history, and that’s my focus.” – Jordan Spieth

“I have a lot of confidence in my game. I love to play with confidence, be aggressive, and that’s just how I’ve always done it.” – Jordan Spieth

“Stats are important to me, especially the ones related to scoring. You’re going to miss fairways and greens out here, so how you play from the sand matters.” – Jordan Spieth

“Golf, to its foundation, is a game of integrity and one that encourages us to give back, kind of be ambassadors, role models, I guess, for kids – whether they like golf or not.” – Jordan Spieth

His ability to focus completely on what he is doing also owes a lot to his supportive wife, who accompanies him in most tournaments.

Now that you know all about Jordan Spieth’s net worth, here are some of the best success lessons to learn from Jordan Spieth:

1. When The Going Gets Tough, Focus

Jordan always found that even through hard times, it was best to focus on improving rather than wallowing in his mistakes.

He recalls the advice his wife gave him when he had an easy tap-in on the green, to take a 5-second pause before completing the hole.

2. Once You Find Your Passion, Do Everything You Can To Achieve It

When playing the sport for the first time, Jordan fell in love almost immediately. He knew then, that he had to make it to the top and become an inspiration to others who had similar goals.

He is serious about making the most of his opportunities and never takes what he has for granted, working hard to improve his game.

Jordan has always stated that in the game of golf, as in life, confidence is everything and you make your own luck.

Even if you just present yourself as a confident person, it already sets you at an advantage against your opponent.

Jordan became well known for his golfing talent during his early years, breaking age records and winning multiple championships as a teenager.

He has become an inspiration to young athletes everywhere and continues to make his mark on the golf circuit by winning or placing at the top of the field in just about every event he attends.

His next goal is to join the best of the best by achieving a grand slam, which he will no doubt achieve very soon.

What do you think about Jordan Spieth’s net worth? Leave a comment below.