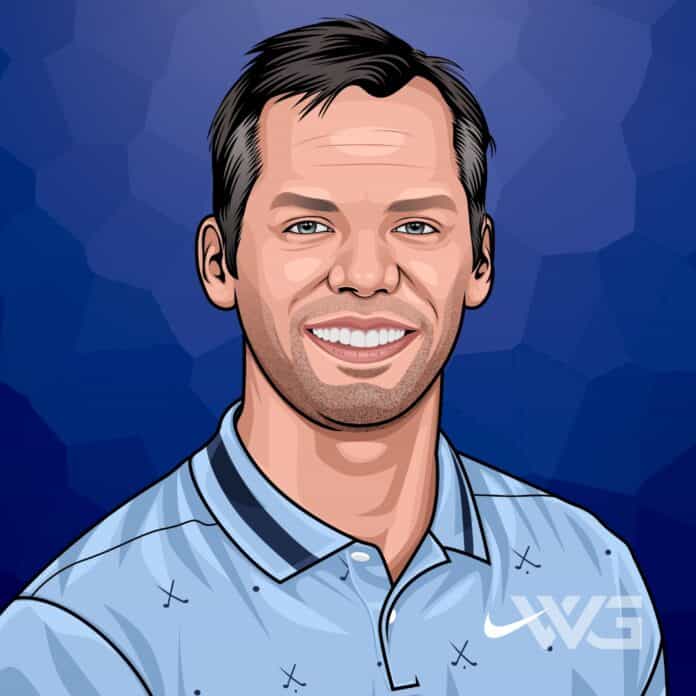 What is Paul Casey’s net worth?

Paul Alexander Casey is an English professional golf player who has made a name for himself as a member of the European and PGA Tours.

After turning professional in 2000, he reached third in the Official World Golf rankings nine years later and continues to play as a member of LIV Golf.

While he may not yet be the wealthiest player on the green, as he continues competing, this could very well change.

Paul Alexander Casey was born July 21, 1977, in Cheltenham, Gloucestershire, England, but he grew up in Weybridge, Surry.

As a child, Paul attended Cleves School and later Hampton School in West London before he studied A levels at Strode’s College in Egham, Surrey.

After graduation, Paul attended Arizona State University on a golf scholarship and distinguished himself in the U.S. by winning three consecutive Pac-12 Championships starting in 1998.

During his amateur career, Casey also won the English Amateur tournament and was a member of the winning 1999 Walker Cup team.

Paul Casey joined the European Tour in 2001 and won his 11th tour event at the Gleneagles Scottish PGA Championship.

While he didn’t win any individual titles in 2004, he was a member of the winning European Ryder Cup team.

He joined the PGA Tour shortly after, though he continued to play mainly in Europe, earning the European Tour of Merit in 2006.

Paul earned his first PGA Tour win in 2009 at the Shell Houston Open and won his 10th European Tour event the same year.

These victories caused him to reach number three in the golf rankings, the highest position he has reached to date.

In 2011, he won the Volvo Golf Champions tournament, followed by the Telus World Skins Game the following year and The Irish Open in 2013.

Casey continued winning a handful of tournaments on the European Tour, though he never rose higher in the World Rankings.

However, in 2018, he was named as the captain’s pick for the European Ryder Cup team.

In 2022, Casey left the PGA Tour to join LIV Golf, where he placed sixth in his first tournament, winning $648k in the process.

Paul Casey’s golfing history has made him of the richest golfers in the world, and his net worth is still growing.

While he hasn’t been one of the highest earners on the course, he still enjoys some significant paydays.

Paul Casey may not be one of the highest-paid athletes in the world, but he has certainly earned a fortune during his professional career.

Paul Casey married Jocelyn Hefner, a distant cousin of Hugh Hefner, in 2008, and the couple lived in Arizona.

However, Paul and Jocelyn later divorced in 2011 due to the demands of Casey’s career negatively impacting their marriage.

He later married Pollyanna Woodward in 2015, after having met at the Formula One Chequered Flag Ball.

Together they welcomed their first son, Lex, in 2014, and so far have not announced any other children.

Paul Casey has won many tournament titles and awards during his career in professional golf.

While all of his successes are important, some stand out as being more noteworthy than others.

Here are some of Paul Casey’s greatest career victories and achievements:

Although he isn’t yet as accredited as Gary Player, Paul Casey is slated to earn many more accolades as he continues competing.

How Does Paul Casey Spend His Money?

Paul Casey prefers to keep his spending private, leaving fans to speculate about his lavish lifestyle.

However, we do know that Casey and his wife live in Scottsdale, Arizona, in a large mansion that sits just next door to a large golf course.

This large home also has a huge outdoor patio that encompasses a crescent-shaped pool that looks out on the adjacent fairway.

It may not be one of the biggest houses in the world, but it certainly is large and luxurious!

Although we don’t know how much Casey paid for his huge home, we’ll be keeping our eyes peeled for any information that comes out in the future.

Paul Casey has hit many milestones during his career, which have helped make him one of the greatest golfers in the world.

However, some moments in his career stand out for their greater impact on his fame and fortune.

Here are some of the best highlights of Paul Casey’s career:

Although he hasn’t achieved the same level of renown as Phil Mickelson, Casey has distinguished himself well during his career.

Paul Casey has dedicated his life to the game of golf, and he takes every tournament very seriously.

He is proud of everything he has accomplished, he hasn’t let his failures hold him back from continuing to compete and build his skills.

Here are our favorite quotes from Paul Casey:

There is a lot we can learn from Paul Casey and his long career as a professional golfer.

Now that you know all about Paul Casey’s net worth, we can take a closer look at what he can teach us about reaching our own goals.

Here are some of the best success lessons to learn from Paul Casey:

1. Look For Ways To Make A Difference

If you’re in a position to make a difference, either in your community or for a single person, you should never hesitate to do so.

Not only can it give you a morale boost, but it can help you make a positive name for yourself, and that can help you further your own goals.

Nothing good will ever come from looking behind you when you’re trying to move forward.

Don’t worry about past mistakes, but learn from them and move on so that you can keep your eyes on the prize.

All successful people need to have confidence in order to be able to put themselves out there.

If you don’t have confidence in your work, you’ll miss out on valuable opportunities that could have been potentially life-changing.

Paul Casey has risen through the ranks to become one of the best golfers in the sport, and his skills on the green have earned him millions in prize money.

Fortunately for his fans, Casey has no plans of retiring any time soon, so we can expect to see much more of him in the future.

Make sure to check back often so that you don’t miss any updates impacting Casey’s wealth and professional golf career.

What do you think about Paul Casey’s net worth? Leave a comment below.

What is Sean Penn's net worth? Introduction  As of ,...