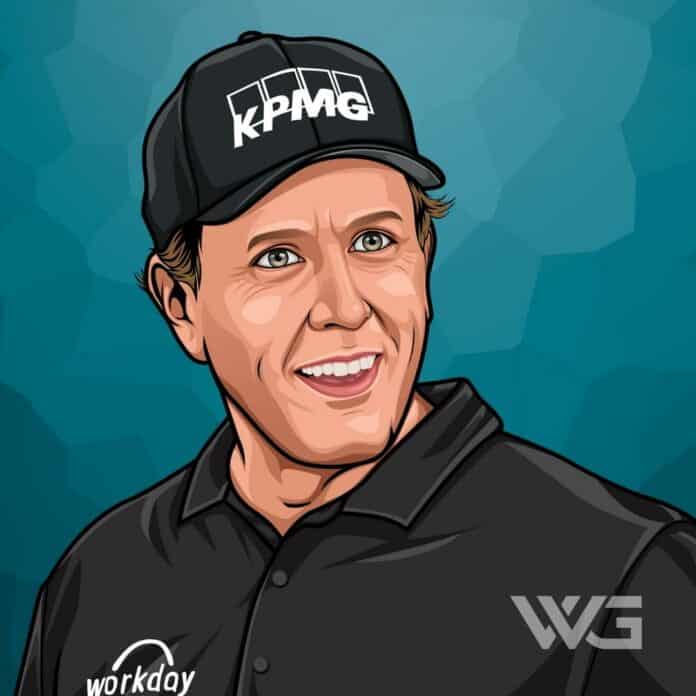 What is Phil Mickelson’s net worth?

Phil Mickelson is an American professional golfer who is one of only a handful of golfers to have won most of the major golfing championships.

In addition to winning three of the four majors, he’s picked up trophies at several high-profile PGA championship tournaments and is known for his left-handed swing.

As of February 2023, Phil Mickelson’s net worth is estimated to be $300 Million.

He began golfing at just eighteen months old after moving to Scottsdale, Arizona, working as a caddy at Pebble Beach Golf Links as a child.

In 1988, Phil Mickelson graduated from the University of San Diego High School, then attended Arizona State University on a golf scholarship.

Before turning professional, Mickelson enjoyed success as a collegiate golfer, winning the US Amateur title in 1990 and winning his first PGA Tour event in 1991.

In 1992, he began his career as a professional golfer, competing in a series of tournaments and gaining recognition for his solid performance on the golf course.

Over the following years, Mickelson picked up numerous tournament prizes, including three wins at the Masters and a PGA Championship trophy.

He beat Tiger Woods at the 2000 Buick Invitational, ending Woods’ winning streak while consolidating his reputation as a top-tier golfer.

In 2018, Phil Mickelson beat Tiger Woods again, picking up an impressive $9 million in prize money in the process.

In addition to his many victories in golf and the associated prize money, his net worth has been enhanced through a series of high-profile brand endorsements.

He’s partnered with the manufacturers of some of the most expensive watches in the world, Rolex, over many years.

Mickelson’s media appearances include a cameo alongside Kevin Costner in the golfing movie Tin Cup and the 2004 series Entourage.

Phil Mickelson’s consistent success both in golf and through endorsement deals has made him one of the richest athletes in the world, with an appropriately large annual salary.

Many of these earnings derive from his tournament winnings, topped up with other income from his investments and business ventures.

Since Mickelson’s professional golfing career remains ongoing, we can expect his career earnings to remain steady for the foreseeable future.

Phil Mickelson’s net worth has continued to increase as his career has developed, with each successive championship adding to his considerable wealth.

As one of the richest golfers in the world, he is able to command large fees for his endorsements, working closely with golfing accessory companies to promote their products.

His 2022 deal with the Saudi golf league, LIV, reportedly worth $200 million, secured another notable boost to his already impressive fortune.

In 1996, Phil Mickelson married his wife Amy, with whom he has three children, daughters Amanda Brynn and Sophia Isabel and son Evan Samuel.

He was investigated for insider trading by the US Securities and Exchange Commission in 2014 but was not found guilty of any wrongdoing.

Mickelson informs his fans of upcoming events through his official Instagram account, which has over 1 million followers.

Phil Mickelson’s professional career has spanned several decades, with the legendary golfer winning many tournaments during that time.

These include many PGA events and lesser-known championships and tournaments that have further increased his wealth.

Here are some of the most notable awards from Phil Mickelson’s career:

Phil Mickelson remains active as a professional golfer to this day, so we can expect his list of awards and achievements to expand as his career continues.

How Does Phil Mickelson Spend His Money?

Phil Mickelson is known for his love of classic and rare cars, which he collects and stores in his spacious garage.

The collection includes some of the most expensive cars in the world, including an Aston Martin Vanquish and a Bentley Continental GT.

He also invests money in real estate, owning several properties in California and a plot near the home of Michael Jordan in Jupiter, Florida.

Phil Mickelson’s successful career has transformed him into one of the highest-paid athletes in the world, with many consecutive years earning tens of millions of dollars.

Despite time out for surgery, he’s been able to maintain his reputation as one of golf’s most celebrated stars, serving as an inspiration to fans of the sport.

Here are some of the best highlights of Phil Mickelson’s career:

Mickelson has had an illustrious and hugely successful career with dozens of notable high points, and his continued involvement in the sport will see more highlights to come.

With decades of experience as a professional golfer, Phil Mickelson has shared many thoughts on the game in his interviews with the media.

This ranges from the mindset of world champion golfers to his appreciation for writers later in life, following his experiences writing books on the sport.

Here are our favorite quotes from Phil Mickelson:

Now that you know all about Phil Mickelson’s net worth, let’s break down some insights into success we can take away from his outstanding professional career.

Here are some of the best success lessons to learn from Phil Mickelson:

1. Don’t Let Being Left Handed Put You Off Sports

With many sports designed for right-handed people, lefties can easily be deterred from participating.

Phil Mickelson proves that being left-handed is no obstacle to success, winning many more tournaments than his right-handed peers.

2. Put Aside The Time To Recover From Injuries

Mickelson has had two sports hernia surgeries due to injuries he suffered while playing golf.

He’s always returned to the game stronger than before, taking the necessary time to rest and recuperate.

3. Stick By Your Family Through Thick And Thin

When Phil Mickelson’s wife suffered from cancer, he was by her side to see her through the various treatment and recovery.

Always ensure those closest to you get the support they need when the going gets tough.

So there you have it, our complete guide to Phil Mickelson’s net worth, covering his championship victories and highly lucrative brand endorsement deals.

With his career showing no signs of slowing down, it remains to be seen what future prize money he’ll pick up to increase his wealth further.

We’ll update this article as new information and financial statistics emerge, so be sure to check back again for the latest details on Phil Mickelson’s net worth.

As of February 2023, Phil Mickelson’s net worth is estimated to be $300 Million.

What do you think about Phil Mickelson’s net worth? Leave a comment below.