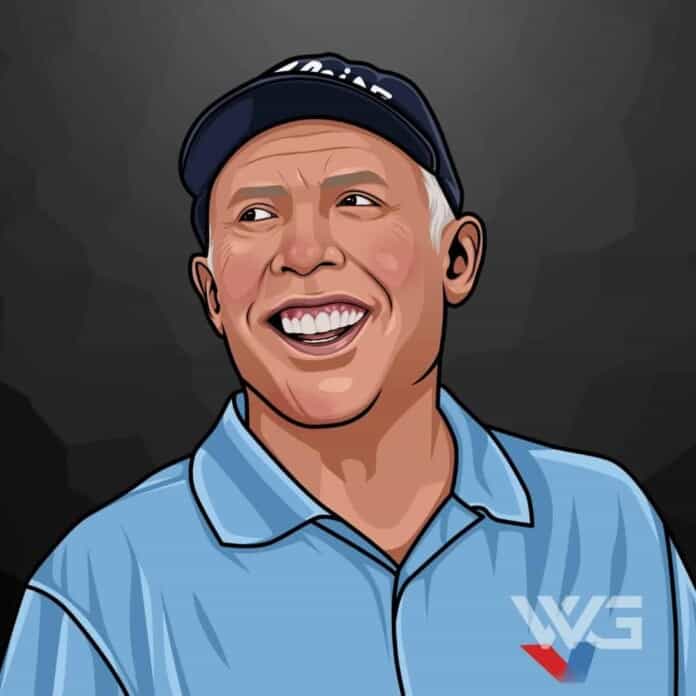 What is Steve Williams’ net worth?

Steve Williams is a caddie.

Williams has been a caddie for many top professional golfers, most recently with Jason Day. Williams is best known for serving as Tiger Woods’ caddie from 1999 to 2011. As we all know, Woods is one of the best golfers in the world.

Steve Williams was born on the 29th of December, 1963, in New Zealand.

He started his career caddying when he was only six years old.

When he was 10 years old, he already could caddie 36 holes on Saturday and Sunday. He practiced until it was dark. He became a two handicap when he was 13 years old.

Williams rose to fame after his first break as a caddie in 1976. He held the bags for Peter Thomson in the New Zeland Open. Thomas was impressed with the young Williams.

Willams traveled to Australia on school breaks to caddie in different tournaments. In 1979, he left school and moved to Europe to become a professional caddie on the European Tour.

Williams spent a lot of time caddying on almost all of the world’s major professional tours. He got steady work with several Australian pros, among them Ian Baker-Finch. The same time e met Greg Norman, and in 1982 became Norman’s regular caddie in all his events in Asia and Australia.

Norman fired him in 1989. Norman later confirmed that he made a mistake and that he tried to rehire him a few years later. Raymond Floyd later hired him after Norman fired him. He was the caddie for Tiger Woods between 1999 and 2011.

Here are some of the best highlights of Steve Williams’ career:

“I was a scratch handicap at age 13 but was also a rugby fanatic. Well, every kid in New Zealand wants to be an All Black, and I was progressing as a rugby player. But caddying, I was so intrigued by it. My dad was a top amateur player, and he’d met Peter at a tournament in New Zealand.” – Steve Williams.

“As a child, my father instilled in me that you’ve got to work hard. I had like $20,000 in the bank by the time I was 13. I had caddied every weekend, had a job in a butcher shop, had a newspaper route, and picked tomatoes. I’m guilty of not going to school, but I’d do anything to make a dollar. Even though I didn’t have my parents’, OK to go caddie.” – Steve Williams

“I’d caddied in Australia for Ian in 1982, and he played with Greg in a couple of tournaments. When you’re out with someone like Greg — not to say you’re looking for a job — you make sure you do everything properly. You want to look professional.” – Steve Williams

“It was night and day. Greg was a young guy, in the spotlight, a global superstar, running the high life. Raymond was an older guy, a family guy. He was a different sort of player, too. Greg was bold, Raymond was more strategic. I loved my time with Raymond.” – Steve Williams

“I thought it would be a challenge. Obviously,, I’d heard so much about him, and I remember a practice round with him when I had been caddying for Raymond. He was at Augusta National in 1996, and Tiger was still an amateur. It was Raymond, Fred Couples, Greg Norman,, and Tiger. It was a misty, cool morning, and the ball wasn’t flying very far.” – Steve Williams

“When he won the Masters in 2001 to hold all four major championship trophies at once. He’d won the British Open and the U.S. Open, and the PGA Championship the previous year. With the PGA in August and the Masters not ‘til April, that was seven months of talk about whether he could do it. The chatter went on and on.” – Steve Williams

Now that you know all about Steve Williams’ net worth and how he achieved success; let’s take a look at some of the best lessons we can learn from him:

We live now, be grateful.

Never ever tale things too personally. It’s not healthy for you.

How much is Steve Williams worth?

Steve Williams’ net worth is estimated to be $20 Million.

How old is Steve Williams?

How tall is Steve Williams?

Steve Williams is a well-established golf caddy. Wiliams has earned his amazing net worth as the caddie for many professional golfers such as Tiger Woods. Steve carried Woods’ clubs from 1999 to 2011, a period where Tiger’s was consistently the top-ranked and highest-earning golfer in the world.

What do you think about Steve Williams’ net worth? Leave a comment below.