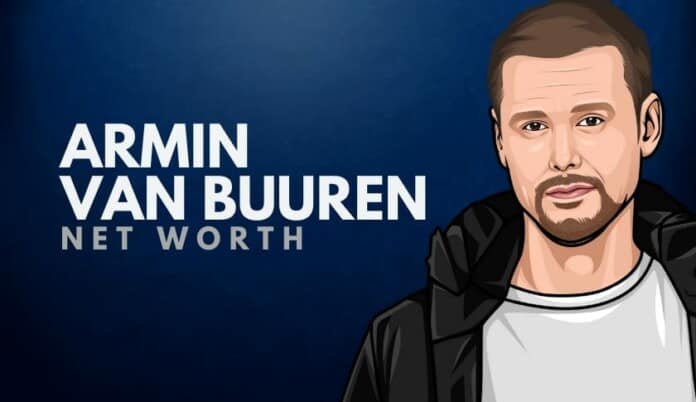 What is Armin Van Buuren’s net worth?

Armin Van Buuren is a Dutch DJ and record producer.

Since 2001, Van Buuren has hosted ‘A State of Trance,’ a weekly radio show broadcast to nearly 40 million listeners in 84 countries on over 100 FM radio stations.

He is considered to be one of the most popular DJs in the world.

Armin Van Buuren was born on the 25th of December, 1976, in Leiden, Netherlands.

He graduated from the Stedelijik Gymnasiym Leiden in 1995. He started to work as a DJ in Club Nexus, playing many sets each week.

In 1997, Van Buuren tasted commercial success for the first time with his song ‘Blue Fear.’ The song was released by the label Cyber Records.

His song ‘Communication’ had become a super hit across the country in 1999.

Van Buuren rose to fame after he was offered a contract by the label AM PM Records. One of his first tracks to be acknowledged by music lovers in the UK was ‘Communication.’

In 2003, he dropped his debut studio album ’76,’ which contained 13 dance numbers. It was a commercial and critical success and earned the 38th spot on the ‘Dutch Albums Top 100’ list.

He worked with singers such as Nadia Ali and Justine Suissa. The overall success of the album earned him the second spot on the list of the top 5 DJs compiled by ‘DJ Mag’ in 2006.

In 2011, Van Buuren celebrated the 500th episode of the radio show ‘A State of Trance’ and performed live in South Africa, the USA, and Argentina.

How Does Armin Van Buuren Spend His Money?

One of Armin Van Buuren’s most notable purchases includes a Volkswagen Polo and a Jaguar F-Type.

Armin van Buuren is the new global ambassador for the World Wide Fund for Nature charity, which aims to “motivate millions of people to join the movement to stop plastic waste being dumped in oceans.”

Here are some of the best highlights of Armin Van Buuren’s career:

“I recommend everyone who DJ’s to do it as a hobby and make sure you have a day job or are going to school. Only 100 DJ’s in the world make a living doing this, by that I mean making a good, comfortable living.” – Armin van Buuren

“I love music, and I loved dance music immediately. So I bought some equipment and started making my own. When I started this, I didn’t say, ‘okay I’m going to do this step and then this step’ to become popular. I just created music that I loved.” – Armin van Buuren

“I’m not a jukebox; I don’t play exactly what the crowd wants to hear – that doesn’t make sense. But, I do look at people’s requests. At the end of the day, they are the ticket payers and they are the ones that come to the show. If I played music that purely entertains me, I’d play very weird music.” – Armin van Buuren

“Holland was one of the first countries to adopt dance music into their culture, and we were the first ones to have really big raves. I grew up in that atmosphere in the early 1990s, and I was very interested in how dance music was made.” – Armin van Buuren

Now that you know all about Armin Van Buuren’s net worth and how he achieved success; let’s take a look at some of the lessons we can learn from him:

You know, sometimes you’re jealous of other people and their achievements, and you want to be that person.

Dreams take time, so never give up on your dreams.

Always have fun. Make sure this moment counts. Tomorrow might be too late.

How much is Armin Van Buuren worth?

Armin Van Buuren’s net worth is estimated to be $55 Million.

How old is Armin Van Buuren?

How tall is Armin Van Buuren?

Armin Van Buuren is a Dutch trance producer and DJ.

He studied law at Leiden University. As his music career took off, he put his degree on hold.

He was 19 years old when he recorded the highly successful ‘Blue Fear.’ His fans voted him to the number one spot of DJ Magazine’s annual “Top 100 List of Most Popular DJs.”

What do you think about Armin Van Buuren’s net worth? Leave a comment below.