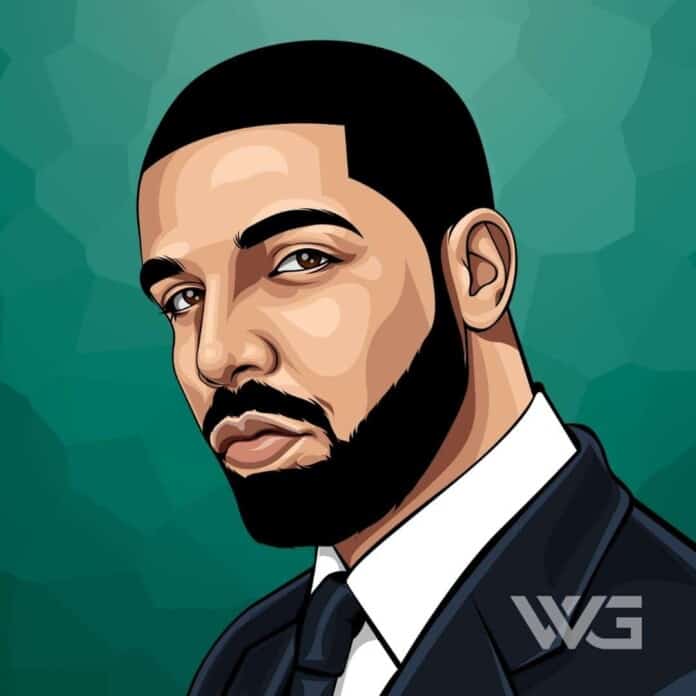 What is Drake’s net worth?

As of January 2023, Drake’s net worth is estimated to be roughly $250 Million; making him one of the richest rappers in the world, and he’s currently signed to Lil Wayne’s company, Young Money Entertainment.

Aubrey “Drake” Graham is a Canadian rapper, singer, songwriter, and actor from Toronto. He initially gained recognition when he starred in the teen drama series, Degrassi: The Next Generation, and pursued rapping from there.

Aubrey Graham was born in Toronto, Ontario on the 24th of October, 1986. His parents split up when he was only 5 years old, and Drake lived with his mother in Toronto. His father was a drummer and moved to Memphis after the divorce to find work.

Drake’s mother was Jewish, and so he attended a Jewish day school and had a Bar Mitzvah ceremony. Drake was often bullied in school for his racial and religious background, and he eventually dropped out of school.

When Drake was 15 years old, he encountered an acting agent who was the father of a high school friend. The agent found Drake a role on Degrassi: The Next Generation, which was a teen drama series.

Drake’s character was Jimmy Brooks, a basketball star who became physically disabled after being shot by a classmate.

Drake has always had a real passion for music, and he said Jay-Z was a major inspiration to him. In 2006, Drake released his very first mixtape, Room for Improvement. A year later he released his second mix-tape, and in 2009, he released his 3rd, ‘So Far Gone’.

Lil Wayne and Drake had collaborated on several songs, and Drake had also joined on one of Wayne’s tours. Drake signed a recording contract with Young Money Entertainment, and in 2010, released his debut album, ‘Thank Me Later’.

Drake has collaborated with some of the best rap artists and hip-hop producers in the world, including the likes of DJ Khaled, Eminem, Nicki Minaj, Chris Brown, Rihanna, and more.

Since then, Drake has released multiple albums, sold millions of copies, and gained an incredible net worth. He is one of the most successful hip-hop artists worldwide.

How much money is Drake worth?

How Does Drake Spend His Money?

Drake has worked hard to amass a fortune, but his spending habits show that he has a big taste for the pleasurable things in life.

Drake has collected a huge collection of unique cars. He likes to purchase extreme and rare cars. He gets all of his cars imported and customized.

He has a Boeing 767 jet plane. The plane has been customized with his own logo “Air Drake”. The jet is valued at $185 million.

Drake has a huge interest in jewelry which has been another luxury expense for him. His fashion brand’s logo is an owl, and that logo has been featured in many pieces of jewelry. Drake has multiple custom-made necklaces that are each worth up to $100,000.

Here are some of the best highlights from Drake’s career so far:

“Sometimes it’s the journey that teaches you a lot about your destination.” – Drake

“A relationship can give you a gut-wrenching feeling sometimes. It’s a real emotional ride.” – Drake

“When it comes to knowing what to say, to charm, I always had it.” – Drake

“Patience is key for getting over a breakup. That, and trailing off your interaction after the breakup.” – Drake

“I’m not confrontational, but if someone challenges, I’m not going to back down.” – Drake

“People like to build their own story about my life. I don’t know if it makes them feel better, or if it makes it okay for them to not like me, but the last thing I grew up as was rich.” – Drake

View our larger collection of the best Drake quotes!

5 Rules for Success from Drake

Now that you know just how much Drake’s net worth is, where he grew up and how he got into music; it’s time to go over some of the success lessons that can be learned from Drake’s success.

Here are 5 success lessons we can learn from Drake, taken from Elite Daily and some of his many interviews throughout his career:

Drake doesn’t hide the fact that he isn’t from “the streets,” but also reminds us that he is just as street smart as any when he raps, “Takes a certain type of man to teach, to be far from hood but understand the streets.”

If anyone knows how to deal with haters and controversy, it’s Drizzy. He is constantly teased by haters and critics for being “soft,” because of his introspective and emotion-laden tracks.

Drake consistently puts out quality content on every album. Even when he appears on another artist’s track as a feature, he makes sure to kill it. This shows that consistency prevails. Anything you do in life should be done with 100 percent effort.

“I never want to be always right cause then I can’t grow, I can’t learn. I have no desire to be always right, I need mistakes, you know? And luckily enough, and knock on this wooden piano here, that my mistakes are never crucial enough for me to be like, “man,” they’re always great learning experiences.”

How much is Drake worth?

Drake’s net worth is estimated to be $250 Million.

How old is Drake?

How tall is Drake?

Drake is one of the most influential hip-hop artists, and he is only becoming more successful as time moves on.

Drake’s net worth is estimated to be roughly $250 Million, and there’s no doubt that this amount will continue to increase over the next few years.

What do you think about Drake’s net worth? Leave a comment below.