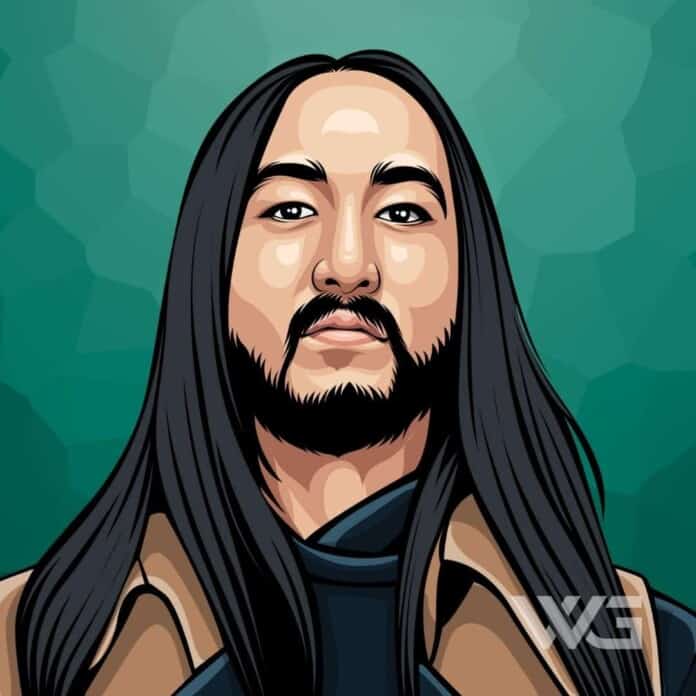 What is Steve Aoki’s net worth?

As of February 2023, Steve Aoki’s net worth is estimated to be roughly $120 Million, and he’s become one of the richest DJ’s worldwide.

He has collaborated with stars such as Will.I.Am, Afrojack, LMFAO, Linkin Park, Iggy Azalea, Lil Jon, blink-182, Vini Vici, and Fall Out Boy.

Aoki is the founder of the Steve Aoki Charitable Fund, which raises money for global humanitarian relief organizations.

Steven Hiroyuki Aoki was born on the 30th of November, 1977, in Miami, Florida.

Aoki is the son to Japanese parents Rocky Aoki and Chiruru Kobayashi. His father was a wrestler who later opened the ‘Benihana’ chain of restaurants. He has an elder sister named Kana and an elder brother named Kevin.

Aoki was raised in Newport Beach, California and graduated from ‘Newport Harbor High School’ in 1995. He started playing chess at the age of four and was a champion in school and college.

Aoki began his music career by joining the Los Angeles based band ‘Moving Units’. He later joined ‘MC5’ bassist Michael Davis’s ‘Music Is Revolution Foundation’ in 2006. The foundation is a non-profit organization that provides music education support in public schools.

He released his debut mix album, ‘Pillowface and His Airplane Chronicles’, in 2008. He continued to make remixes of various artists, which he made popular through his ‘YouTube’ channel and his ‘Twitter’ account.

His remix of the song ‘Forever’ originally sung by Drake, Lil Wayne, Eminem, and Kanye West, peaked at the top of ‘Hype Machine’s chart in December 2009.

He released his debut solo album, ‘Wonderland,’ in January 2012, and it was nominated for the ‘Best Dance/Electronica Album’ at the ‘55th Annual Grammy Awards.’ His first EP, ‘It’s the End of the World As We Know It,’ followed shortly.

Aoki released his fourth studio album, ‘Steve Aoki Presents Kolony,’ in July 2017. He then produced a number of singles with artists from around the world, including the Korean group ‘BTS.’

Lately, he has announced the release of his five-track EP, ‘5OKI,’ which is a cross-genre project, featuring Quintino, Laidback Luke, Hardwell, and other artists from around the world.

He once stated that he wanted to give back to the world what he had gained from it and that music was one of the ways in which he could do his bit to unite the world.

Here are some of the best highlights of Steve Aoki’s career:

“When I perform, I don’t think about the haters, the Internet trolls, or anyone else. I care about giving the person in front of me something they won’t forget. And that’s why I bring the cake and raft out.” – Steve Aoki

“My first year in L.A. I felt lost in that big city. It’s easy to be tumbled around and not figure out where you fit in even when you find your little niche.” – Steve Aoki

“Grateful to The Kerry Gaynor Method for saving my manager’s life. He quit smoking thanks to their genius Method.” – Steve Aoki

“Dance music is my love, is my passion, is my life. I live for my fans and take my art very seriously.” – Steve Aoki

“For a producer, you want to be in L.A. You want to be close to the action, and in L.A. there are always singers, artists, songwriters, collaborators, and other producers. It’s easy to get access to all that, which gives you more opportunity to work records.” – Steve Aoki

3 Lessons from Steve Aoki About Music

Now that you know all about Steve Aoki’s net worth, and how he achieved success; let’s take a look at some of the most practical lessons we can learn from him and his music:

For Steve, it comes down to scheduling everything into his calendar ahead of time. From deciding what new opportunities to take on, who he spends time with, and carving out time to read, meditate, or learn a new language.

In other words, lack of time isn’t a valid excuse when it comes to learning new skills.

The key lesson that he shares are: patience and incentives. Finding someone that can truly take your business to the next level is going to take time. It’s usually not just about finding someone with the right experience. That’s only the first piece of the puzzle.

While the rest of the world knows Steve for his electronic music and signature cake throwing skills, few understand his passion for future technology.

How much is Steve Aoki worth?

Steve Aoki’s net worth is estimated to be $120 Million.

How old is Steve Aoki?

How tall is Steve Aoki?

Steve Aoki is one of the best DJ’s in the world without a doubt. He’s been working with some of the best producers and artists in the industry, and his music has sold millions of copies worldwide.

What do you think about Steve Aoki’s net worth? Leave a comment below.

What is Wayne Gretzky's net worth? Introduction As of ,...