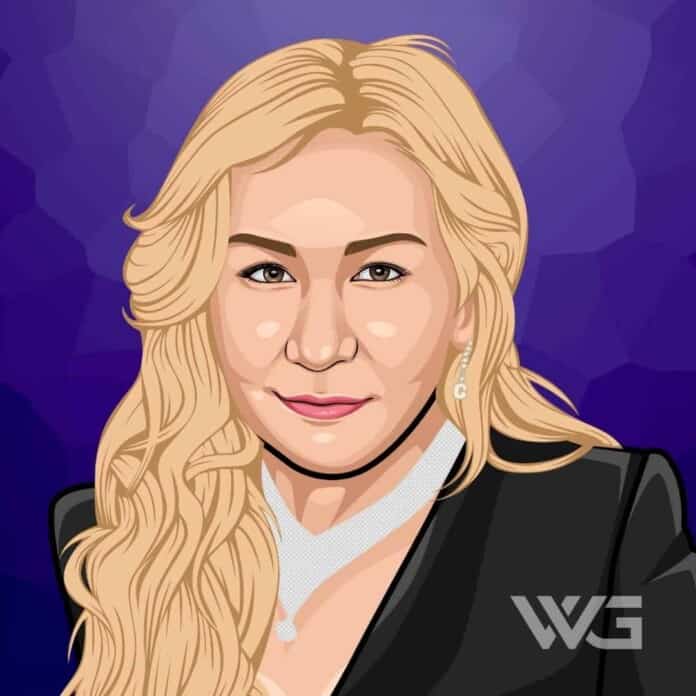 What is Anna Shay’s net worth?

Anna Shay is an heiress and daughter of Edward Shay, the late billionaire who founded Pacific Architects and Engineers.

Her family fortune comes with selling weapons and defense technology. According to the Daily Mail, she and her brother sold her father’s company in 2006 for $1.2 billion.

Shay is the daughter of the late billionaire businessman Edward SShay and Ai-San. Her father was the founder of Pacific Architects and Engineers, a defense contractor that worked with the United Nations and the U.S. government.

In an interview with Oprah magazine, Shay stated her parents as her heroes. Shay said: “My father, mother, and son. My parents are my heroes because they have taught me values, morals, honor, respect, loyalty, and principles. These things are rare qualities today.”

While he was alive, her father never wanted her to work, but despite this, she has done a lot of philanthropy. Shay served as a board member for the George Lopez Foundation, which raises awareness about kidney disease and organ donation.

Shay became involved in ‘Bling Empire’ in 2021, after some prodding from Jeff Jenkins. Jenkins is best known for his work on ‘Keeping Up With the Kardashians.’ As longtime friends, Shay expressed er interest in working as an assistant on Jenkins’s shows.

After Anna and her brother inherited their father’s shares and sold them, she became one of the richest star on the reality show. Shay has been married and divorced four times.

None of her wealth comes from her ex-husbands. Being the private icon that she is, she has not revealed the identities of her four husbands.

How Does Anna Shay Spend Her Money?

Anna Shay spends her money on real estate and cars.

Shay is the former owner of an incredible mansion that sits on one of the best plots along Hollywood’s famed Sunset Boulevard. The home was built in 1926 and came with five bedrooms and four and a half bathrooms.

Shay loves cars, and one of her most notable purchases is a white Lamborghini.

Shay owns some of the most expensive jewelry. In her collection, we can see pieces such as two diamond-encrusted pieces. She also owns a Boucheron question mark necklace worth at least $675,000.

Here are some of the best highlights of Anna Shay’s career:

“In the world I was raised in, ‘crazy’ is not a good word to put next to the lifestyle I was born into. I didn’t do anything except be born. It’s my parents. My dad is from the South Side of Chicago. My mother is from aristocracy. Those two are amazing. They’re not here, but they’re here. My mother said, ‘You were born in a crystal ball with a silver spoon.” – Anna Shay

“To this day, I don’t understand the concept of this. How could somebody go up and say, ‘Can I sponsor this?’ It’s so embarrassing. I just walk away, like, I don’t know this person.” – Anna Shay

“Very happy for everybody. Did I expect the show to be successful? No. I wasn’t even expecting to be in front of the camera. I’m very shy, and I went along with whatever situation was happening. It was just me. I think the success of the show has a lot to do with how Netflix.” – Anna Shay

“Don’t think so. I have nothing against Christine. Met Christine nine, ten years ago while going to Fashion Week. I knew a different side of Christine then. During the show, however, she wanted to portray things — I just went with whatever she said.” – Anna Shay

“Decided to have a party, and if anything, [the wrong time was] probably meant for me because I’m always late. I always say, when friends call me for dinner, ‘Don’t tell me the real-time!'” – Anna Shay

“I believe that one creates their own style. It doesn’t matter if you’re wearing something from Target or Chanel. There’s only one thing that I wouldn’t wear. It’s something straight off of a mannequin because the mannequin is a size zero.” – Anna Shay

Now that you know all about Anna Shay’s net worth and how she achieved success; let’s take a look at some of the lessons we can learn from her:

1. Be Proud Of What You Have Achieved

It takes a lot of hard work and time to get where you want to be in life. Pause, and be grateful for what you have achieved.

Smile and be happy. Life is too short. Be grateful.

3. Don’t Take Anything For Granted

Life is never what we think it is. We never take things for granted. Try to appreciate each day.

How much is Anna Shay worth?

Anna Shay’s net worth is estimated to be $600 Million.

How old is Anna Shay?

How tall is Anna Shay?

Anna Shay is best known for starring in the Netflix series ‘Bling Empire’. Shay is a socialite and philanthropist, and she is of Japanese and Russian descent. Her parents were billionaires, Edward Shay and Ai-San Shay.

What do you think about Anna Shay’s net worth? Leave a comment below.