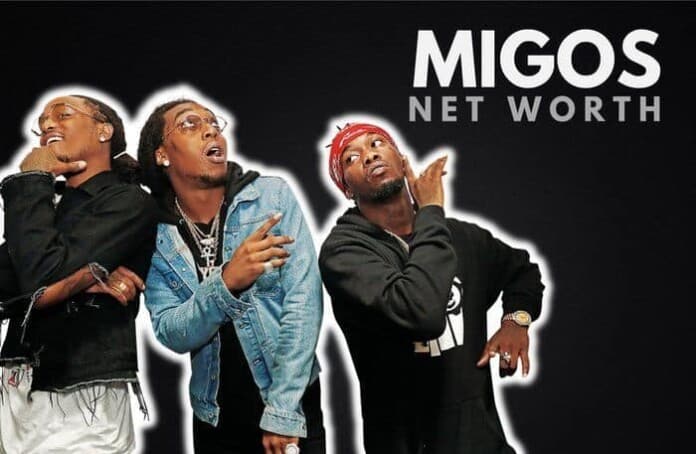 What is the Migos’ net worth?

As a group, Migos’ net worth is roughly $80 Million, making their individual net worth estimates just over $26.6 million each, respectively.

Migos is an American hip hop group from Lawrenceville, Georgia, that was formed in 2009. The group consists of rappers Quavo, Offset, and Takeoff. Although they came together almost 9 years ago, the group only started achieving mainstream success in 2017.

As mentioned above, Migos is a hip hop trio consisting of rappers Quavo, Offset, and Takeoff. Here’s a little info about their background and where they grew up:

Quavious Keyate Marshall, known professionally as Quavo, was born on the 2nd April 1991, in Athens, Georgia.

Kiari Kendrell Cephus, known professionally as Offset, was born on the 14th December, 1991, in Lawrenceville, Georgia. Offset is cousins with Quavo, and was raised in Gwinnett County with the other two members of the group.

Offset is now married to fellow rapper, Cardi B. Don’t forget to read about Offset net worth.

Kirshnik Khari Ball, known professionally as Takeoff, was born on the 18th June, 1994, in Lawrenceville, Georgia. He is the youngest member of Migos, and is Quavo’s nephew. Read about Takeoff net worth. He was raised in Gwinnett County with the other two member of the group.

Migos first began gaining traction after the release of the single “Versace” in 2013. This was 4 years after the group formed, which shows how patient you have to be to see success.

In 2015, they released their debut studio album, “Yung Rich Nation”, with the help of young Australia producer Yifei Hechen

Two years later, their single “Bad and Boujee” went viral all over the internet, and set them up for mainstream fame. You’ve probably seen the memes online plastered with the lyrics “rain drop, drop top”, which were performed in the song.

As of February 2023, Migos’ net worth is estimated at $80 Million dollars, collectively as a group.

Here are some of the best highlights of Migos’ career:

“And they bustin’ for Instagram get your Klout up.” – Migos

“Came a long way from kicking doors, now people they pay me in PayPal.” – Migos

“All types of Euros and Yen, I got money in Berlin.” – Migos

“Never been a gopher but I always been a soldier.” – Migos

Migos have achieved great success in the past couple of years, but it wouldn’t have come without all the hard work they’d been putting in before that. No doubt will they be worth more in the next few years to come.

What do you think about Migos’ net worth? Leave a comment below.