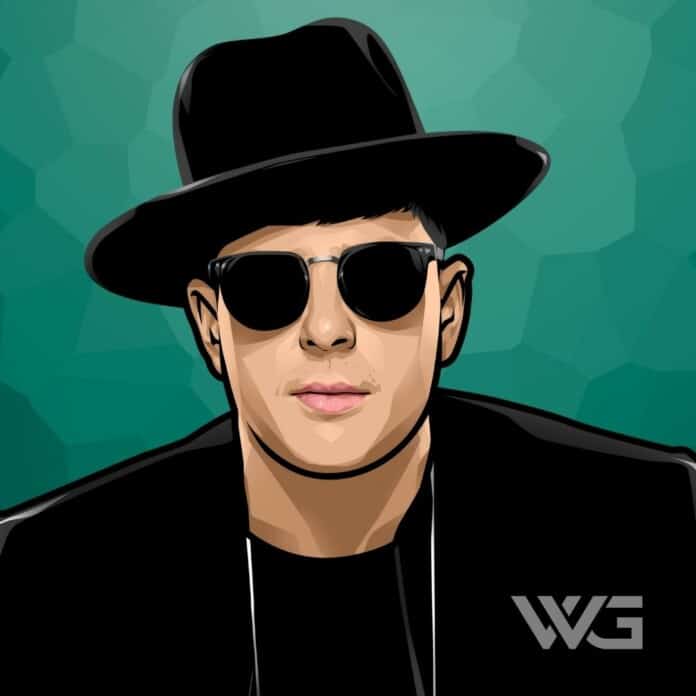 What is Timmy Trumpet’s net worth?

He has become known internationally for playing the trumpet live and using jazz elements in the realm of global dance music.

In 2019, Trumpet was the first trumpet player to perform in zero gravity, a project partnership between the European Space Agency and BigCityBeats.

Timothy Jude Smith was born on the 9th of June, 1982, in Sydney, Australia.

Timothy started playing the trumpet at an early age, taught by his father.

At thirteen, Timothy was named ‘Young Musician of the Year’ before being granted a full scholarship to the Conservatorium of Music. He was tutored by Anthony Heinrich of the Sydney Symphony Orchestra.

Timmy Trumpet makes dynamic, progressive house music that he often accents with his trumpet playing. He began playing trumpet at age four and initially attended the Sydney Conservatorium of Music, where he received classical instruction.

After being thrown out for a prank, however, he transferred to a public high school where he became increasingly involved with jazz. Although his trumpet ability predicted a performance career, it was dance music and not jazz that ultimately grabbed his interest.

In 2001, billing himself as “Timmy Trumpet,” he began combining his skills as a DJ and trumpeter, a sound that caught audiences’ attention in such EDM hot spots as Ibiza and London.

Trumpet has produced tracks for such labels as PACHA, Ministry of Sound, and One Love and has performed similarly inclined electronic acts as the Stafford Brothers, Swedish House Mafia, Armin Van Buuren, and others.

In 2014, his single ‘Freaks,’ featuring rapper Savage, hit number one in New Zealand and eventually got quadruple-platinum status the following year.

Here are some of the best highlights of Timmy Trumpet’s career:

“I had a few releases make a few ripples early on, but the track that sent me overseas was Freaks. I didn’t expect that track to hit as hard as it did, and it just won’t go away. It just went gold in the US, four years after its original release!” – Timmy Trumpet

“I don’t always have a solid idea of what I want when I get into the studio. Sometimes I’ve just got a sound or a hook in mind. Other times I play around until something sick bubbles up. I’ve had tracks done in an afternoon and other tracks I’ve tinkered with for years.” – Timmy Trumpet

“It was the first time I’ve been nervous on stage in a long time! I was trying to concentrate on the set, but in the back of my mind, I knew what I was going to do, and I couldn’t get it out of my head. You can hear my voice shaky on the mic. It was hard to keep it together. I’m glad she said yes! That would have been awkward.” – Timmy Trumpet

“All my energy! Tomorrowland has always been one of my biggest and most-watched performances of the year, and I hope this year will be no different. I’ll give it everything, and the set I have prepared is full of music of all genres with tributes to the old and the new. I can’t f*kn wait!!” – Timmy Trumpet

“I have a lot of collaborations coming out. The next collab is with The Vengaboys on a rework of their hit ‘Up and Down.’ It’s such a fun record, and I love playing it. It just gets everyone in a great mood and we need a lot of that in our lives right now.” – Timmy Trumpet

Now that you know all about Timmy Trumpet’s net worth and how he achieved success; let’s take a look at some of the lessons we can learn from him:

Some people, when they do someone a favor, are always looking for a chance to call it in. And some aren’t, but they’re still aware of it – still, regard it as debt.

The biggest lie we tell ourselves is that we don’t have TIME. No excuses!

It’s time for YOU to shine, go out and own this moment.

How much is Timmy Trumpet worth?

Timmy Trumpet’s net worth is estimated to be $4 Million.

How old is Timmy Trumpet?

How tall is Timmy Trumpet?

Timmy Trumpet is a musician, main room house DJ, and producer based in Sydney. He has supported and played alongside Armin Van Buuren, Carl Cox, Fedde le Grand, and Dizzee Rascal.

He has successfully transitioned from the international stage as an acclaimed Jazz musician to the realm of global dance music.

What do you think about Timmy Trumpet’s net worth? Leave a comment below.