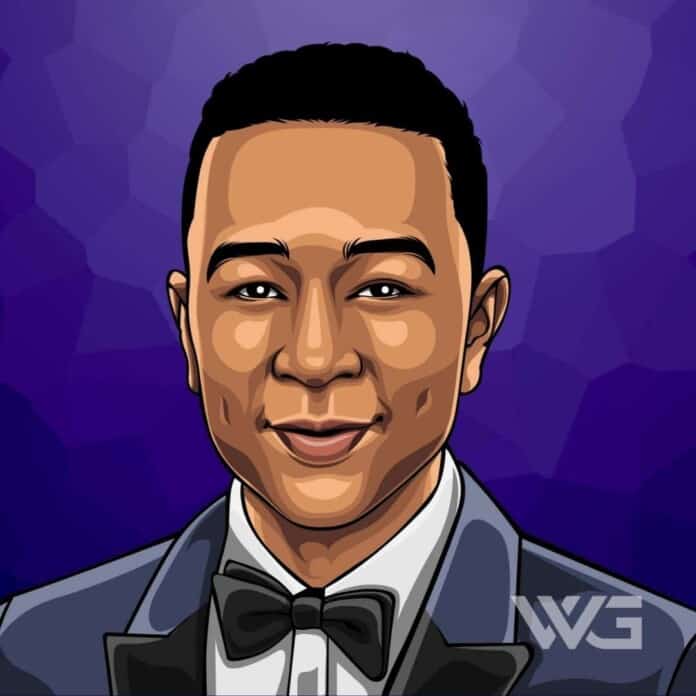 What is John Legend’s net worth?

As of January 2023, John Legend’s net worth is approximately $100 Million.

Legend has worked with established artists, and hehe signed to Kanye West’s record label GOOD Music. John is best known for his own single “All of Me” which became a Billboard Hot 100 number-one hit.

John Roger Stephens was born on the 28th of December, 1978, in Springfield, Ohio. He is the son to Ronald Lamar Stephens and Phyllis Elaine. John was interested in music from an early age, and he began singing in the church choir when he was 4 years old.

He was homeschooled for some years, after which he attended the North High School. He went to the University of Pennsylvania.

At the beginning of Legend’s career, he used to perform in nightclubs, as well as hold shows throughout the country. He has worked with star musicians such as Alicia Keys and Kanye West.

His debut album ‘Get Lifted’ was released in 2004. With hit singles, such as ‘Ordinary People’, ‘Number One’, and ‘So High’, the album performed brilliantly, peaking at number seven on the Billboard 200.

In 2006, Legend released his second studio album ‘Once Again’ which debuted at number 3 on the US Billboard 200. Its hit song ‘Heaven’ won Legend his second Grammy Award for Best Male R&B Vocal Performances.

Two years later, he collaborated with the hip hop band The Roots, and released the album ‘Wake up!’ The album won the 2010 Grammy Award for Best R&B album.

In 2013, he released his fourth album, ‘Love in the Future’. Peaking at the fourth position on the US Billboard 200, the album was a huge success, selling 68,000 copies within just the first week of its release.

In 2015, he won an Oscar for the song ‘Glory’, which he had performed for the film ‘Selma’, along with rapper Lonnie Rashid Lynn, also known as Common.

His fifth album ‘Darkness and Light’ was released in 2016. The same year, he also played a significant role in the Oscar-winning film ‘La La Land’.

Here are some of the best highlights of John Legend’s career:

“I’m trying to be me and embrace all the parts of me that have grown up, listened to more music and soaked up more influences.” – John Legend

“Sometimes there’s that perfect moment when the crowd, the music, the energy of the room come together in a way that brings me to tears.” – John Legend

“Then, I started very early on building my own e-mail list and Web site and all that. That really helped generate more and more people and compelled the word of mouth.” – John Legend

“As a politician, you have to deal with someone wanting you to fail every day. I think I prefer being in a situation where generally people are rooting for me, and if they aren’t rooting for me, they aren’t out there to see my downfall. I respect the people who have the stomach for it.” – John Legend

3 Lessons from John Legend About Success and Career

Now that you know all about John Legend’s net worth, and how he achieved success; let’s take a look at some of the best lessons from him about his career and success:

Successful people are never satisfied with what they already know. They want to learn more. That’s why they read more, travel more, and meet more new people. It seems like everyone agrees: Being a lifelong learner is crucial for success.

2. Shut Up And Listen

John Legend knows it’s crucial to put his ideas out into the world. However… He also knows that there’s a time to shut up and listen. This may be surprising to some. Aren’t successful people supposed to be loud and outspoken?

Whenever we learn or do something new the same thing happens. I’m sure you’ve experienced it, too: At first, it’s fun. You learn fast and make progress quickly. You hit a wall. Suddenly it gets harder to get better. And frustration sets in: “I’m never going to figure this out!”

Trust the process because success never comes over one night.

How much is John Legend worth?

John Legend’s net worth is estimated to be $100 Million.

How old is John Legend?

How tall is John Legend?

John Legend is an amazing singer who has worked with stars such as Kanye West and Alicia Keys. He has won several awards which include ten Grammy awards as well as one Golden Globe Award.

What do you think about John Legend’s net worth? Leave a comment below.