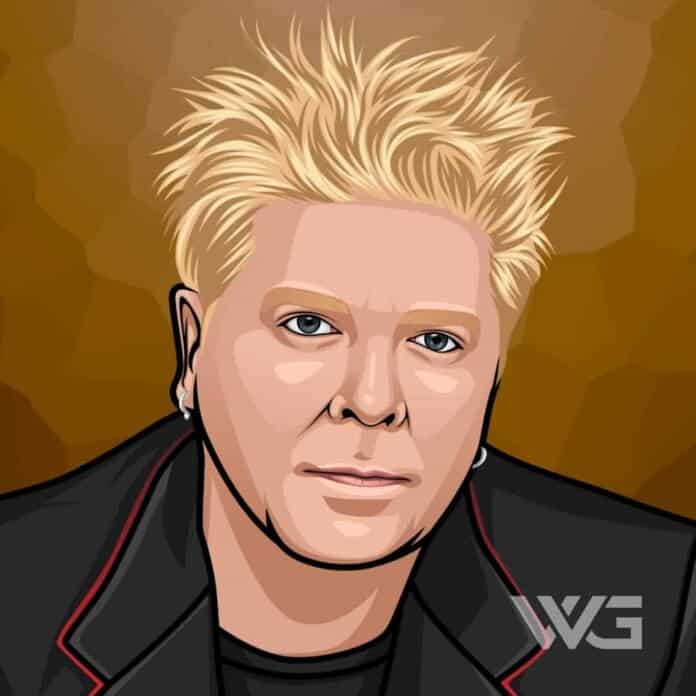 What is Dexter Holland’s net worth?

Dexter Holland is an American musician and businessman. Holland is best known as the lead vocalist, rhythm guitarist, and songwriter of The Offspring’s American rock band.

In 2017, he attained a Ph.D. degree in molecular biology. Holland is one of the greatest punk vocalists in rock history. He has cited bands and artists such as The Beatles, Aerosmith, Bob Dylan, KISS, Bob Marley, Queen, and The Rolling Stones as his early influences.

Bryan Keith “Dexter” Holland was born on the 29th of December, 1965, in California. During his school years, he became known as an excellent student. Holland graduated as valedictorian after he displayed an interest in mathematics.

After high school, he attended the University of Southern California and received a B.S degree in biology. He then went on the get an M.S. degree in molecular biology. After this, he started to focus on music instead of his college education.

Holland’s first band was named Manic Subsidal and it was formed in 1984. The following year, the band changed their name to The Offspring and signed a deal with Nemesis Records. Their debut album was released in 1989. Holland later reissued their first album with his own record label, Nitro Records.

The group signed a new record deal with Epitaph Records in 1991. They went on to release another album titled ‘Ignition’. Their album ‘Smash’ sold more than 11 million copies worldwide. The album featured hits like ‘Come Out and Play,’ ‘Self Esteem,’ and ‘Gotta Get Away.’

In 1998, The Offspring released ‘Americana’ which featured hits including ‘Pretty Fly (For a White Guy),’ ‘Why Don’t You Get a Job,’ and ‘The Kids Aren’t Alright.’

In 2019, Holland was the only remaining original member. The Offspring still tours occasionally and Holland is best known for playing the piano during the live shows.

How Does Dexter Holland Spend His Money?

Dexter Holland is an amazing musician and businessman, and when it comes to spending money he likes to spend it on things like stamps and other hobbies such as surfing and skydiving.

Holland was the valedictorian in his high school. He is a licensed Airline Transport Polit and he owns a Soviet-era fighter jet. He also flies a private jet with an anarchy symbol on the tail.

Holland is an avid collector of stamps from The Isle of Man.

Holland loves to surf and he also likes skateboarding and skydiving.

Here are some of the best highlights of Dexter Holland’s career:

“There’s something undeniably oxymoronic about a ‘successful’ rock n’ roll band. Who wants to hear a bunch of success stories whining about their success? More importantly, what can be the drive behind a band, what can they have to rage against when they are successes? That’s a dichotomy every successful band wrestles with.” – Dexter Holland

“You can’t sing about the same things as you did when you were 20; it would be ridiculous to sing about, I don’t know, being in the quad. You can’t really write about mortgage payments or stuff like that… but you can talk about ‘let’s make the world a better place.” – Dexter Holland

“I think music is so diverse today, and bands are so diverse. If you were a rock band in the Eighties, you kind of had to stick to one thing. Now, in this age of Coachella and European festivals and stuff, it’s kind of anything goes, so that allowed us to try different things.” – Dexter Holland

“If you go back to ‘Pretty Fly,’ it was a very popish song, but there was a satirical side to it, and I think that’s cool. I like the idea that it’s making people think just a little bit.” – Dexter Holland

Now that you know all about Dexter Holland’s net worth, and how he achieved success; let’s take a look at some of the lessons we can learn from him:

Punk rock is very rebellious, of course, but it also means thinking for yourself.

Selling another 10 million albums is not a priority. Putting out something you’re proud of is.

Even if you are good at school and have other dreams you should focus on what makes you happy, like music.

How much is Dexter Holland worth?

Dexter Holland’s net worth is estimated to be $80 Million.

How old is Dexter Holland?

How tall is Dexter Holland?

Dexter Holland is a well-established singer, songwriter, and businessman who is best known for being the frontman of the rock band Offspring.

He is a man of many talents and among other things he is a successful entrepreneur, pilot, and virologist. He obtained a Ph.D. in molecular biology in 2017. Holland is a punk legend that has been active in the music industry for more than 25 years.

What do you think about Dexter Holland’s net worth? Leave a comment below.