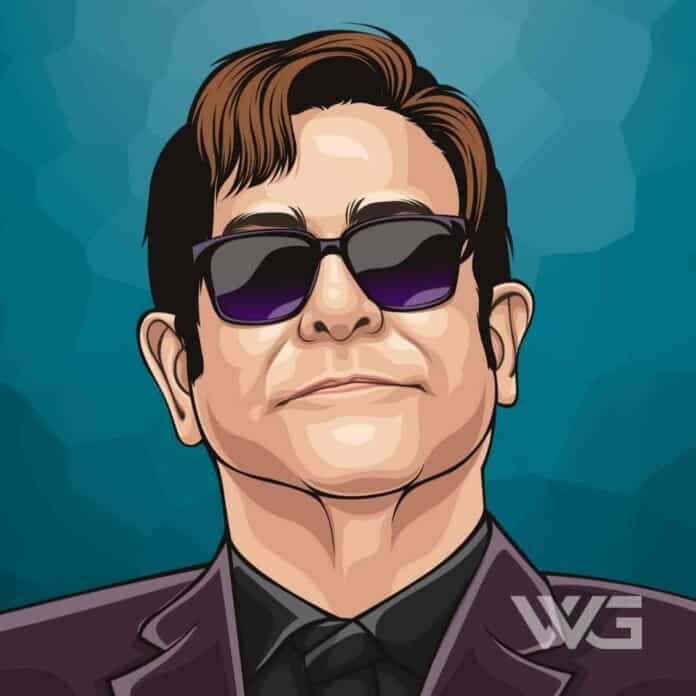 What is Elton John’s net worth?

One of the industry’s most talented and iconic musicians, Elton John, is known for his soulful and eccentric compositions and performances.

Being in the ranks of the most commercially successful artists (300 million albums sold worldwide is evidence of this), he has had a tremendous impact on the music industry and has, in fact, paved the way for many upcoming artists.

Together with Elvis and The Beatles, Madonna, Michael Jackson, and others, the much-loved Sir Elton John is among the highest-paid celebrities in the whole of music history.

In the several decades that he has been in the industry, he has won many of the most notable and prestigious awards for his work.

Elton John (born Reginald Kenneth Dwight, March 25, 1947) is a well-known singer, pianist, and composer from Pinner, Middlesex. The British artist was born to parents Stanley Dwight and Sheila Eileen, who were both musically inclined.

Elton began his performances as early as six. Those were family parties and gatherings, and at the age of seven, he started formal piano lessons.

Since he started playing the piano at such a young age, by the time he was 11 years old, he earned a scholarship to the Royal Academy of Music, where he studied for five years. During that time, he was obsessed with playing Frederic Chopin and Johann Sebastian Bach. He also used to sing in the choir during Saturday classes.

Elton’s very first job was as a part-time pianist at a pub. After that, he worked at a music publishing house; he also performed at hotels and even formed a band with his friends during that time.

In 1967 he collaborated with Bernie Taupin, with whom he created a song called ‘Scarecrow.’ This was around the same time that Reginald Kenneth Dwight changed his name to Elton John. By 1968, both Elton and Bernie had become songwriters for DJM Records for other musicians.

In 1969, Sir Elton John released his debut album ‘Empty Sky,’ which paved the way to the peak of his success. After that, the singer formed Elton John Band and started releasing a bunch of influential albums.

1970 was the year when Elton hit number four on the Billboard 200 charts. After the first couple of albums, he had a tremendous following, and in 1972 the artist revealed his next album ‘Honky Château’ which was Elton’s first-ever US number-one album.

‘Crocodile Rock’ was his first track to get on the US Billboard Hot 100 charts, and his album from 1973, named ‘Goodbye Yellow Brick Road,’ was a smashing success. These songs sent him straight to the top, and he soon established his record label, The Rocket Record Company.

His 1974 album reached number one in both the UK and the US, and it was shortly followed by ‘Caribou’ and ‘Captain Fantastic and the Brown Dirt Cowboy.’

During the 1980s, Elton performed several live shows with his numerous smash hits like ‘I’m Still Standing,’ ‘Little Jeannie,’ and ‘I Guess That’s Why They Call It The Blues.’

During the early 90s, he also collaborated with Tim Rice, working on music for Disney’s film ‘The Lion King’. Sir Elton John gained the highest recognition with the song ‘Can You Feel the Love Tonight’ which helped him win his first Academy Award.

In 1997 Elton John’s performance of ‘Candle in the Wind 1997’ at Princess Diana’s funeral soon became the best-selling single ever; later, just over 33 million copies of it were sold internationally.

During his life, Elton John was married twice. His first spouse was German recording engineer Renate Blauel. They married on February 14, 1984, and divorced on November 18, 1988.

In 1988, Elton John came out as gay, and in 1993, he started a long-lasting relationship with Canadian filmmaker David Furnish.

In 2014, when same-sex marriage became legal, Elton John and David Furnish got married. Their wedding ceremony fell on the couple’s ninth anniversary of the civil partnership on December 21.

They have two children, Zachary Jackson Levon Furnish (born on December 25, 2010) and John Elijah Joseph Daniel John (born on January 11, 2013.) Both brothers have the same surrogate mother, whose identity is still being kept a secret.

It’s important to mention that in 1992, John established the Elton John AIDS Foundation as a charity to support initiatives for HIV/AIDS prevention. The aim of the foundation is to eliminate prejudice and discrimination against HIV/AIDS-affected individuals and provide services to people living with or who are at risk of contracting HIV/AIDS.

Elton John’s real estate portfolio is undoubtedly impressive. It will take some time to count all his estate possessions, but we’ll try.

Everything started as early as 1974. That was a year after the incredible success of the album ‘Goodbye Yellow Brick Road.’ Sir Elton John purchased his first house in Berkshire, England, for £400,000. Known as Woodside, the house has eight bedrooms, a library, stunning gardens, tennis courts, and even an 18th-century orangery.

In 1992, Elton John bought Holland Park mansion in London. The place of residence is extremely popular among celebrities, including the Beckhams and Simon Cowell.

In 1990, the artist also bought a 1920s villa in Nice, France. Reports suggest it is worth more than £15 million. The house is incredibly luxurious, with a huge pool, beautiful gardens, and vast art and china collections.

1993 was the year when Elton John purchased his first property in the USA. John chose Atlanta, where he bought a condo on the 36th floor of a skyscraper.

The star also owns a one-bedroom apartment on the island of Giudecca in Venice, a two-bedroom house located along the Sussex coast bought for £650,000 in 2010, a 5,000-square-foot Beverly Hills home purchased together with his husband, David Furnish, and 5,343 square feet L.A. mansion for $8.5 million.

Here are some of the best highlights of Elton John’s career:

“Music has healing power. It has the ability to take people out of themselves for a few hours.” – Elton John

“Don’t judge the picture by the frame, every man is not the same.” – Elton John

“Live for each second without hesitation.” – Elton John

View our larger collection of the best Elton John quotes!

3 Rules for Success from Elton John

Now you know all about Elton John’s net worth, and how he achieved success; let’s take a look at some of the success lessons we can learn from him:

1. Don’t be so quick to judge others

Everyone has a story and a reason as to why they are the way they are. If we judge by looks or first impressions we might never get to know the real person. Don’t miss out on getting to know someone because of your previous views on something.

2. Live each second to the fullest

Live your life to the fullest. Enjoy every experience and everything that you do. We never know when our last day will be, so live like this is your last day!!

Music has the power to change your mood and to give you that “feel good” vibe. It’s something that the soul can identify with. Feeling like you are not alone and like someone knows what you are going through can help you feel better.

How much is Elton John net worth?

Elton John’s net worth is estimated to be $500 Million.

How old is Elton John?

How tall is Elton John?

What is Elton John’s real name?

Reginald Kenneth Dwight is Sir John’s real name. During the mid-sixties, he used Reg Dwight as his stage name but didn’t really like it. While working with saxophonist Elton Dean in his Bluesology band, Elton decided to “borrow” Dean’s first name. Thus, in 1974, the artist officially changed his name to Elton Hercules John.

He picked “Hercules” as his middle name after a horse named Hercules from the well-liked British sitcom Steptoe and Son.

What is Elton John’s best-selling album?

John’s best-selling studio album is ‘Goodbye Yellow Brick Road.’ It has sold more than a mind-blowing 30 million. The album also belongs to the best-selling albums worldwide.

Elton John is one of the best-selling music artists and the most iconic musicians in the world who has been recognized for his individuality and talent on several occasions.

Having been in the music industry for over five decades, Elton John has gone a very long way in his career and has made an incredible impact on the whole music world.

John showed an exceptional talent for integrating and fusing many pop and rock pieces into an exuberant, streamlined sound that was somewhat impersonal and extroverted. His songs were among the first to combine synthesized instrumentation with electric guitar and acoustic piano.

What do you think about Elton John’s net worth? Leave a comment below.

Dave Whelan is a famous footballer and well-known businessman. With his impressive history, it’s no wonder that he has a net worth of $210 million.